Well, I feel like a turd because I have recently rebuilt my 351 Cleveland and yet I can’t figure out how to properly hook up the alternator. To provide some background, I rebuilt the Cleveland back in 2003 with the help of a friend who let me use his heads and a tremendous amount of work was done to the engine and I’m guessing it makes about 400 hp. I do recall putting in a “GM alternator” with his help.The alternator is a AutoZone Dura last 7078. I have one red wire with a fusible link going from the battery post on the alternator to the battery side of the starter solenoid because I thought that’s how it was hooked up.  Thinking I had a bad alternator I went to Autozone yesterday and they were too busy to test it so I asked them to just replace and they did.They put I put the alternator on last night and started it up and it still not showing with a voltmeter at the battery that it is charging because the voltage is the same as when the car is off. I did make sure to have the RPMs over 2000. Now that I’m reading it looks like this particular alternator is externally regulated but I don’t have a voltage regulator at all hooked up to this mustang.  I thought that when the alternator was spinning it sent electricity out through the red wire that would then charge the battery at the same time but I’m thinking that shows how little I truly know about the cars electronica system.

I look forward to contributing to other peoples questions that I have learned quite a bit through the process. The engine and transmission and rear end or out of a 71 Mustang that I had sitting in theGarage from age 5 until someone helped me build it when I was 16 back in 1996.

I usually steer clear of forums like this because there seems to be a lot of grumpy people who pass their time by trying to make the posters feel stupid. I don’t want any smart ass replies just give it to me straight and I will answer any question the best I can and send any pictures or video needed to help resolve this issue.
thank you much! 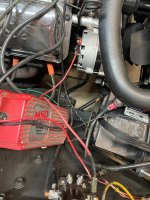 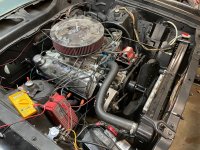 Holy crap- you guys are awesome-   I will read through and decide what to order/install and post the solution when I get around to doing the work.  I appreciate the advice and look forward to learning and helping others here.  Thanks!!