I'm tempted to message the seller and ask where the pics of the 1973 are: 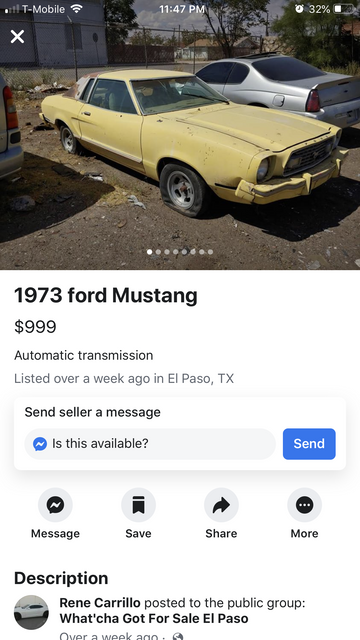 It's worth $500 more if the tires were inflated.

It's worth $500 more if the tires were inflated.
Click to expand...

BUTT UGLY but just keep in mind without these little Mustangs the MUSTANG would have died!

Met a guy at a show couple weeks ago that has I think a 77 with one hundred miles on it.

Some of you are probably not aware that the Probe was destined to be the new Mustang model. They had built cars with the Mustang emblems and all. Ford got so many letters telling them that it would not sell as a mustang with front wheel drive. I was one of the millions that sent in letters. Ford went with new car line called Probe and went to work on rear wheel drive Mustang.

Nothing wrong with II just like most do not like the 71 73 models. Saw one this past weekend at show was an original in great shape. She left before I got to talk to her about it.

BTW the car might have been built in 73 but would have a 74 title. Production switched in July of 73 to the Mustang II.

Last 73 down the line was actually a Cougar that resides at NPD in Charlotte with a few miles on it a vert. if I recall correct.

Just like the original Mustang, the Mustang II was the right idea at the right time. They sold quite well in their first few years due to the gas crisis / manipulation by OPEC. People were dumping traditional musclecars left and right for low prices. Later, Iacocca had another great idea with the Chrysler minivan. The Mustang II performance models like the Cobra with lots of tape stripes, and another one I recall that had a big spider on the hood (?) were a bit overdone, There just weren't many genuine factory performance cars at the time. For example, you could still get a Pontiac Trans Am with a 455 under the hood in '76, but it was essentially the same engine from a station wagon. Low mpg, along with low hp and torque numbers.