Hello everyone this is 1st time I have been on here and posted something. I hope to find this very useful and helpful for me. I have a 71 Mustang Mach 1 with 351 Cleveland, last weekend I went to replace a exhaust manifold gasket with thought it would be a easy fix but turned into a 2.5 hour project(hard to get wrenches in right spot). My problem is one of my exhaust manifold bolts are stripped into the head? I am thinking this is why the exhaust manifold gasket blew out in 1st place. Any suggestions on how to fix? Longer bolt maybe work? Thanks for any help!

The normal way to fix stripped threads is to drill and tap for a heli-coil. Probably tough to do with the head on the car, depending on which one stripped. You may want to remove the head and take it to a machine shop to install, to make sure it's done correctly.

A longer bolt is certainly worth a try. Chase the threads to the bottom with a thread restorer NOT a tap. Then try the longer bolt. There is not supposed to be a gasket between the head and exhaust manifold. If you want to make sure it seals use a THIN coat of RTV, tighten the bolts and let it cure for 24 hours. It won't burn out and it will seal. Chuck

A longer bolt is certainly worth a try. Chase the threads to the bottom with a thread restorer NOT a tap. Then try the longer bolt. There is not supposed to be a gasket between the head and exhaust manifold. If you want to make sure it seals use a THIN coat of RTV, tighten the bolts and let it cure for 24 hours. It won't burn out and it will seal. Chuck
Click to expand...

+1 on the thread chaser. I found that a lot of the times the first couple threads are jacked. You clean them up and the bolt will grab nicely onto the remaining threads. Make sure not to bottom out the bolt:exclamation: This is what usually ruins the threads when you try and take out that bottomed out bolt.

Welcome to the forum!

If it were me, I pull the head and work on it on the bench or take it to a pro if I couldn't get it.

Post a short intro in the Introductions section when you get a chance, so we can give you a proper welcome. ::welcome::

I appreciate all the advice the longer bolt did work then when I went to start it. It still has a exhaust manifold leaks double checked all the bolts and they are tight. Anyone else confirm that u for sure don't need exhaust manifold gaskets on these? I have heard of such a thing. Thanks again for all the help!

You can install gaskets. Make sure the manifold is not cracked and that the mating surface is clean not pitted. Installing gaskets will help seal the minor imperfections. Also make sure the bolts are not to long.

Maybe this will help. 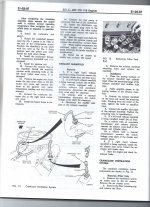 My understanding has always been that the facrtory didn't install gaskets because of the (supposed) pefect mating surfaces. After that, though, you install gaskets. They are available. $11.69 here at NAPA.

Thanks everyone for the advice couple problems I ended up finding out. I have 4v exhaust manifolds and nobody at parts stores seems to know the difference so they gave me 2v gaskets. I ended up having to order 4v in from summit, will be here in a few days. I also didn't clean the old gasket off well enough and there was 1 spot with old gasket which would of also caused it to leak. Thanks again for the advice!

Glad to hear that the longer bolt worked for you.

Just saw this old thread about the manifolds. It seems to me there was a government standard that took the gaskets out. You can put one in just like using tube headers. I know it would be hard to believe but when I worked in race shop in the 60's we built Trans Am racing engines and did not even put head gaskets on some of the troublesome engines mainly Pontiac. The surface of the block was decked to as smooth as the mill would let and the head also and then the two were lapped to make a perfect mating surface. Sprayed a coat of silver rustoleum on the surface and torqued down. Worked better than even O-rings. I saw engines run over 2,000 miles on the track and never leak. We started by doing this to motorcycle heads and just tried it on the Pontiac that would not finish a race without blowing a gasket.

I would have pulled the head and used a bottom tap to get all the thread I could, run the bolts in to make sure they would go lower than the thickness of the flange check the manifold for warpage and torque per spec. I always use antisieze on bolts in the manifold so they do not rust up.