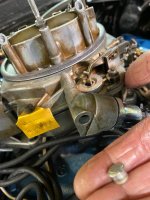 After three straight months working on the car and completing some major routine maintenance that hadn’t been done in years before I got the car and while up on the rack.. I finally was ready to start it up today. Cranked it over waiting for gas to reach the carb and also allowing the oil pump to circulate some oil to the heads as I had changed the valve seals, it then fired up. Top end was noisy and theee seconds later fuel started flowing out the front of the carb. It has never been rebuilt, thought about it while I had the top of the engine cleared off. The carb sat on the shelf, dry, and more then likely the float got stuck while sitting and the back pressure of the fuel took care of the rest creating my dilemma. These plugs are originally soldered in, so, not meant for excessive pressures...I learned that this is a common issue with these carbs over the years, many rebuilt units have the plugs reinstalled and JB Welded or the like. I have reset mine tonight, hoping to try the car again tomorrow. Yep, procrastinating never pays off and I will have to rebuild the carb, sooner or later... I just got tired of working on the car, I did a lot of work to it. Anyone have experience with this soldered plug issue, please chime in.

Yup, when I bought my car the plug had already been jb welded or whatever was used. It didn’t last long. I drove it 3 hours home, then a couple days later it was done. I just ended up going with a different carb, but my car has been restored so not that worried about the originality as much as you would with your car. I did keep all the original stuff that I have replaced. I’m pretty sure that there’s a place that rebuilds these carbs, someone will chime in. Sorry no help

Found this. It is for info only.

Unfortunately, that was a common problem with the 4300 series carburetors. I had to replace the carburetor on a '72 Q code Gran Torino Sport that the previous owner must have rebuilt with a baseball bat and hammer. I ordered it from the Ford dealer so it was a new Motorcraft and not a parts house knockoff from China. It ran for about a week before I noticed a strong fuel smell. Thinking I had not tightened the hose to the fuel filter properly, I removed the air cleaner and discovered fuel pouring out from the front of the carburetor where the plug is.

Ford eventually released a TSB (Technical Service Bulletin) on this issue. It explained that the plug was used to seal a hole that was used during the manufacturing process to drill the fuel inlet passage. The repair kit contained a new plug and a two-part Loctite fuel-resistant epoxy compound. The TSB was explicit on the proper cleaning of the inlet passage and the cure time for the epoxy. The repair worked, as I never had another fuel leak and I did check it regularly.

A couple of years later, I ordered a new Motorcraft 4300-D for my 429 Torino. When I removed it from the carton I noticed it had the same sealant around the plug. It never leaked so the fix worked.


I used a two part epoxy and it held today to at least let me get the car running and warmed up. However, it is still bubbling fuel out the top of the carb near the accelerator pump. It appears the carb needs an overhaul. I am going to buy a remanf. One for the time being and send this in to be rebuilt properly. I want all the nice finishes))).


On a side note, it appears that the previously disconnected heater core was in sound shape as it is holding pressure fine and the heat now works. The two outlets in the engine bay had been professionally covered up with nice fitting rubber plugs. This led me to believe that someone was protecting core, which they would not have bothered doing if it was leaking.


A 48 year old carb that has never been rebuilt before, I guess, it owes the car nothing at this stage. Before I buy a replacement, I will disassemble to see how bad the float is, must have some severe sticking issues. If I can fix for the summer, great, if not, Plan B...

Back firing out the exhaust