So I obviously believe in the mantra if 1 is good 2 is better.  Some may recall the purchase of my next project in late 2016.  Well, that car needs a fair amount of bodywork of which I have already acquired the patch panels to do.  As I stated in my other post, there is a great Mercury community out there as well.  Through this group I have come across some very hard to find parts.  Well, word came my way back in June on a very solid car minus the driveline.  I ran down to Atlanta back in June and made the deal.  I have been trying to tidy some other project ends up around the house so I was delayed in getting back to pick up the car until yesterday.  After a down and back to trade off a 69 Mercury Montego parts car and return back with a much better starting point I am wore the heck out today.  Left 5 am yesterday returned with a nasty storm busting loose for the last 20 miles, I arrived home around 8:30 pm last night.  Almost 900 miles to include off load and reload from the trailer.  So here are the next TWO project cars.  The white one will be mostly parts at this point, although I hate parting out such low production cars. 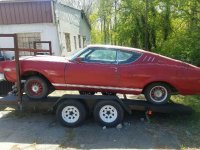 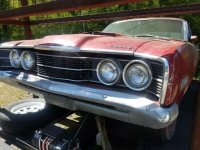 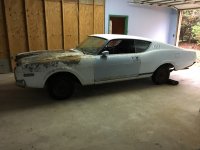 Prior Posts on this endeavor:

Congratulations on your new projects, now I would try to restore both of them!

Nice, I always liked the Cyclones.

Never seen one before. Looks like it could be a great resto project. Love the clean sleek lines

What engines were originally in both Cyclones? How much rust in both cars? I always wanted a 1968 formal roofline 390 Cyclone. I have yet to ever see one in the flesh, so to speak. Chuck

Looks like you have two good cars to start with. Good luck with the project.

What engines were originally in both Cyclones? How much rust in both cars? I always wanted a 1968 formal roofline 390 Cyclone. I have yet to ever see one in the flesh, so to speak. Chuck
Click to expand...

Both were 302 cars.  The white one, which is actually blue to Mercury still has the driveline. The red originally had a 302 as well but that and the tranny are gone.  That's fine as I am still planning the 351C with a 6:71 BDS blower and a C6.  The white car basically has no floors and the bottoms of the quarters and trunk drops are rough.  I have patch panels for all.  The red one is very very clean.  Story was it was sold in Washington state and somehow made its way to Louisiana over the years where it was parked in a body shop after locking up the engine in the early 80's.  The car is super clean underneath.  3 pinholes found in the lower passenger quarter, but I already have those panels.  Going to move things forward in time and money on bodywork.

Hate to disappoint folks, but these will not be restorations. The plan is to get 1 Pro-Street Resto Mod out of the red car. The white/blue one will be a donor in support of whatever extra is needed. It will give me some spare parts for very hard to find sheet metal for these models. You can see in the other post. There were not many to start with and fewer 50 years later.

bkdunha, Great find and a nice change from the typical Ford (Mustang, Torino/Fairlane, Galaxie , Falcon etc) project cars. Those 68-69 Torino/Montego-Cyclone body styles were very slick good looking cars and were a terror on the NASCAR tracks. A lot of my friends who wanted something larger than a Mustang had 68/69 Torinos most with the 390 GT. My High School buddy had one of the 390 GT cars but sold it when we went into the Air Force. Came back with a 69 Cyclone with a 428 SCJ 4 speed with the Super Drag Pack (what Mercury called the Drag pack with the 4.30 gear). Was cop bait Calypso Coral and an absolute beast, but at 8-10 MPG you planned your outings by where the gas stations were!!

Good that you have a parts car since there is not a lot of parts support for body parts on those cars. A few things are shared with the Torino but most were unique to the Mercury. Ford was also in a 2 year styling cycle, which was great for keeping something new looking in the drive way, but tough 50+ years later when looking for parts for a car that was only produced in a fraction of the Torinos built. So your correct that a total restoration would be tough.

Good luck with your Cyclone project and looking forward to watching your progress.

Man, I’d kill for one of those!

Man, I’d kill for one of those!
Click to expand...

Do I need to take my pin off the member map???  Well, when I come up missing I will make sure my wife has my Forum login to extract the evidence. lollerz

Coincidentally last night i saw an episode of Phantom Works where they restomoded a Cyclone. In the rear they adapted a four link suspension designed for a Cuda.

I just watched FantomWorks on Velocity network last night where they "restored" a 67 Cyclone! They had to buy a donor car to compete the work. Great looking cars.

If I remember right the first one you bought has like one option on it, lol. My dad had bought a car at the Mercury dealer and he told them I was looking at buying a mustang. The salesman wanted me to come in and drive a cyclone so I did. Me and dad got in probably a 390 with 4 speed brand new and I did a burn out from the dealer as far as it would spin and speed shifted through the gears. Dad was about to s&amp;%$. I told him that was the way I would drive it so I had to test it that way, lol.

The pictures are at the Mustang / Ford junk yard that I visited in Oxford, NC. Scotty has several cyclones in the yard and some Cougars also. If it is a BB car he probably will not sell but he might have something you need.

Don't do like me and get too many projects on the stove and not get anything done, lol. Saw the same episode. Another forum group I belong to on Cyclone's blew up last night on the airing. 70K in parts alone is ridiculous. I know a couple of guys who said they provided a few of the parts they needed. Funny observation is that some of the metalwork they said they had to fabricate have panels available. Toe kicks are available from Mac's and Dearborn Classics as well as replacement floor pan sections. Why did they have to buy a $17K big block car to scavenge the AC system? I just sold a 69 Montego with a complete AC system for the gas money it took me to get to Atlanta. There was alot of drama for affect in my opinion. Mine is also a 68 so you had a chance to see alot of the areas I will be working on. The 4 link they purchased was templated for a Cougar. Knew it was going to be to narrow for the rear rails when they said that. I missed the first 10 minutes of the show, but in all they had a very nice starting point it looks like. At best that car could be valued at 30 - 35K on the market. It sounds like the owner will never part with it, but it will be hard to insure for what it sounds like they have invested in it.

Don't do like me and get too many projects on the stove and not get anything done, lol.

I hear ya David.  Thanks for the lead on some parts.  I will PM you if you could get me a phone number or address to contact him I would really appreciate that.

This will "probably" be close to or may last big build.  This one will be a longer term project to keep me busy until retirement.  Doubt the wifey will be flexible with spending once dipping into the retirement plans.

Popped back in after a looonnnggg absence

G
What's the current state of idler arms for our cars?
2