Finally getting around to installing the new dash pad that the previous owner purchased (Dashes Direct) for my 71.  The dash was not installed when I purchased the car, so I didn't take it apart to see how it goes together.  The new dash pad assembly actually seated pretty easily with the 3 spring clips, and it seems to fit nice.  My question concerns the screws that go up through the instrument panel and glove box covers.  These screws go up through speed nuts that are attached to the top dash plate, and then they go ... ?  It seems like they need to screw into the dash pad somehow, because it needs to be pulled down to fit correctly at the front.  But, the new dash pad has a narrow metal plate that runs the length of the pad, directly above the speed nuts.  That plate has several large holes in it, only half of which line up with the speed nuts below.  But, even with the holes that do line up, the screws from the interior kit I have don't seem nearly long enough to reach the pad material above the plate.

Foam has no strength for anchoring screws.  Use the metal flange.

Thanks for the help.  I'll move the speed nuts up to the flange from where they have been, but looks like I'll need to drill some new holes in the flange first, since only the passenger side holes line up with the screw holes beneath.  What was confusing about this is the parts diagram I have sure looks like those speed nuts are supposed to go on the top of the dash, and not up on the pad flange.  But, then they wouldn't anchor the pad.  Thanks again.

You might be missing a metal part the screws to the actual metal dash board on the drivers side. I think it has 5 sheet metal screws that attach it. The dash pad should go below the dash in the car. and the head of the screw rests on the dash. The instrument panel then goes on to hide the dash panel mate up. I might have a pic. The pic is not clear I can get a better one later today. I think you might be missing a part. It is about maybe 1.1/4" wide has a bend in it and maybe 18" long is raw steel not painted or plated. 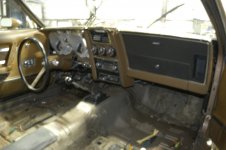 Here are a few pictures of what David is talking about.  Hope these help. 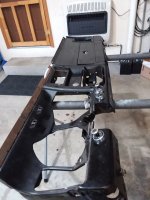 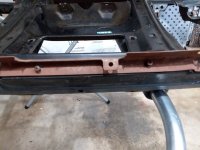 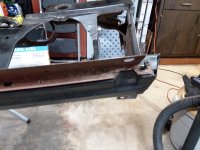 Great pics, Guys!  Thanks!  Although, now I am second guessing.  Yes, I believe I have that part.  That is where the speed nuts are currently attached.  And, in Kilgon's 1st pic, it looks like it has (or had) speed nuts at those holes? I attached some pics below. One shows where the speed nuts are on the dash. The other shows the dash pad flange above. At that location, and at the center screw on the passenger side, the hole in the flange is a wide rectangle.  The other holes are large circles.  The issue is the screw goes up through the speed nut, and into those large holes, without grabbing any part of the dash pad.  So, without a speed nut or something on the flange, the screws won't pull the dash pad down and secure it. 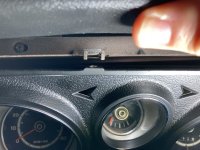 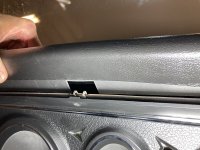 Did you remove the metal part of the top dash that has the speaker grill holes in it (also has the VIN plate). Once that is removed, the dash pad attaches to that part and is then reinstalled and the 5 or so screws go in the front to secure it to the dash itself.  Pulling out the metal part can be a pain because of the metal clips toward the windshield are so tight but a quick pull from the drivers side then another from the passenger side and the whole thing comes out. Your dash pad should have some studs in it that will mate with the holes on the metal part of the top dash and then there are some nuts that tighten down. Then reinstall with the screws at the front. Good luck.

Thank for all the input.  Here's what I ended up doing after seeing your posts and pics ... Since the middle screw on each side of the dash had the large rectangle hole above it in the pad flange, I left those speed nuts down on the dash to still secure the center of each dash trim piece.  For the other 4 screws, I moved the speed nuts up to the pad flange, drilling new holes in the flange where the factory holes didn't line up with the screw holes.  That allowed the screws to pull the pad down at those 4 points.  Not sure if that's the way it came from Ford, but seems to have worked.  Thanks again for the help. 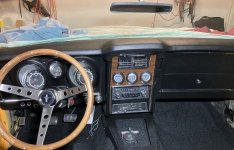 How do you install center dash panel