As I live in Australia, all cars, even those built as far back as the 50's on onwards, have yellow rear turn signals. The red flashing stop / tail light set up is basically an unknown thing here.

I'm concerned that people (especially those new to driving and those in a hurry) will not recognise the red flashing tail lights as a turn signal and at some point run up the back of me.

My plan is to change out the clear reversing globes in the centre clear section of the rear tail lights for yellow globes and use those for both reversing and turn signals.

I have a 72 wiring diagram and have studied it closely. The key issue is that the place where the turn signal and stop lamp wiring is combined is in the switch mechanism in the column behind the steering wheel. It would be complicated to change this I believe..

My plan is to locate the 2 wires that connect to the 2 front turn signals / lights that are located under the front bumper between the plug on the column and the plug that goes through the cowl. (Wire numbers 2 and 3).

I plan to splice into these wires and run 2 wires to the back of the car. Once I reach the rear light assemblies, I plan to use a pair of diodes on both the turn signal wire and the reversing wire (to stop any feedback) and then connect the diode to the wire that connects to the reversing globe (that I will change from clear to yellow).

Finally to my question:

Has anyone else completed this conversion and if so, how has it been done? Like my plan above or another way?

Any info would be appreciated.

You know CJ pony parts has an LED conversion that you can do. Makes the tail lights super bright compared to the OEM lights. You may want to try that before you try converting to the yellow? The brightness may make up for the lack of a yellow lens or bulb? Just a thought

Thanks for the tip. I checked the LED tail lights at CJ Pony parts. They only make the lights brighter and they dont appear to change the turn signal to yellow. They look like they retain the red colour to be flashing for turn signals.

Dennis, Totally agree with your comments re flashing brake lights in Australia, 99.0% of drivers would think you just had faulty brake lights and no intention of turning.

My thoughts on your fix.

Thanks for your comments.. I had forgotten that if I feed the 2 extra wires from the front indicator wires and not change the wires for the stop lights then the rear brake lights would still flash.

I need to do both your suggestion of basically joining wire 16 from the stock switch to the 2 wires that go to the rear stop lights (wires 5 and 9). This will effectively remove the stop lights from the turn signal switch assembly. This will stop the rear brake lights flashing..

Add the 2 extra wires I need from front indicators to the back of the car per my original post and add the diodes then that would work.

Cut wire 9 and 5 on the back of the rear tail light assembly and use those 2 wires as the new indicator wires and use the diodes as per my original plan.

Either way at least 1 wire if not 2 need to be pulled through into the trunk.

Both options mean that wires need to be cut and diodes added.

The alternative to the diode and limiting more cutting of wires, is to get a super bright Yellow 12v LED and drill a hole in the reversing section of the tail light and add the LED into the assembly and keep the indicator and reversing circuits separate. I think I will investigate this as an additional option.

To update this toping. I have found a small T10 Wedge type socket that I will insert a bright Amber LED into and drill a hole in the tail light housing and add the extra light to the centre section of the tail light. This will avoid having to cut the wires for the reversing light and keep the wiring separate. 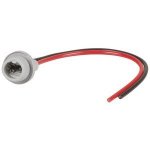 The easiest way is to get a converter, as shown in the 7th post in this thread (no need to run extra wires), and a wiring diagram shown in the 13th post, as well as other discussions about it in UK and Australia. And, they're available in Australia

Don, Thanks for the links. I will have a read

I proceeded with my plan and added an extra Amber bright LED to the centre part of the tail light assembly.

I then ran 2 wires and spliced them into the wires from the steering column plug as planned.

Now I have Amber flashing rear turn signals in the centre section visible via the clear lens and the rear stop lights no longer flash when the turn signal is on.

I may add a second Amber LED on the other side of the reversing globe. Will see how they look in the dark and get the road worthy tester to confirm that the ones I have are bright enough.

Here are a few short videos of the end result.

Thanks for the info guys.

Looking good, a great idea. Here in the US or Canada and likely the UK and Europe, we can have red or amber turn signals. This might be a good alternative if desired.

Here in Australia we can have red flashing indicators, but they are so uncommon, ie only older imported cars some times have them, most people would not know the red flashing is the indicator. So I erred on the side of caution and changed to amber.

Here in Australia we can have red flashing indicators, but they are so uncommon, ie only older imported cars some times have them, most people would not know the red flashing is the indicator. So I erred on the side of caution and changed to amber.
Click to expand...

I thought Aussies signalled with a long tube that only plays one note   :whistling:

I see that your tail light housing is like most of them turned off color inside due to heat. I blast them with walnut shells to remove the powder surface and then spray with Fusion paint by Krylon in Satin white. Makes the lights much brighter and the housings look new. I use for the side marker light housings and also the front turn signal on the 73. 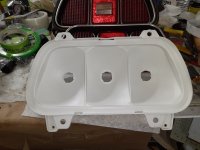 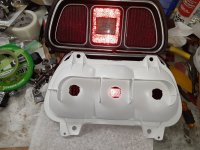 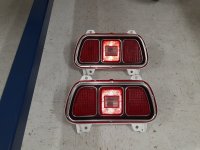 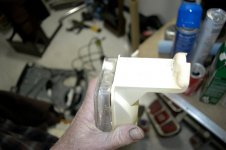 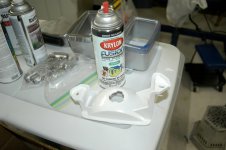 Thanks for the info David. Yes they are a bit yellowed and a bit powdery.

Will have a look at cleaning them up.

B
Some fuddlement fixed, onto the next two, start position not working, right turn signal not working