Does anyone know the story behind this 1973 Mustang at Bonneville Speed Week 2022? The picture is from the January 2023 issue of Hot Rod page 64.

I found these two items about the event. Not much, but something: 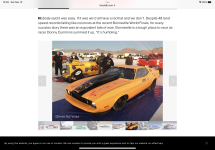 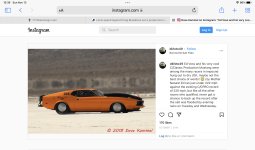 Thanks for looking into this.
Interesting to note that Ed Voss was also the driver of the black Mustang in the “Land Speed 71-73” thread.

It looks like the same car with new paint. I think the photos in black paint were a couple of years old.
I still think that car is WAY cool!
3

Interesting here , is that he's not using any wing on the back, and he is using a flat hood with cowl induced carb intake not NACA scoops.
3

My guess is that the wing and NACA hood (which is 1" higher) are eliminated to reduce aerodynamic friction.

Steve McMahan said:
I found these two items about the event. Not much, but something:

222 MPH, impressive. I would love to see detailed specs, and lots more photos. I, for one, would not feel comfortable going much over 100 in our 73 Mach 1. Earlier this year I might have pegged my comfort level at a much higher speed, especially after installing and AOD to replace our C4. With 3.5:1 TractionLok set of gears in the rear axle, and a nice Street/Strip built 351W (not C) that has enough torque and horsepower to push against the high air resistance at greater speeds, I might have been fine pushing it to 140 or so. But, a few months ago, quite unexpectedly the Right Front Outer Wheel Bearing failed, and pretty much welded the inner race to the spindle. That failure occurred at a fairly low speed (30 - 35 PMH), so no serious damage was done. But, if that had happened at high speed it could have been disastrous.

When stuff like happens (wheel bearing failure in particular) I think back on the fact that these First Generation Mustangs were really just reskinned Falcons with some added design features. Despite how ferocious they sound, or menacing they look, they really were never built for extremely high speed use. Luckily I am not 19 (and managed to live past 19 somehow), and I do not feel the need to take these cars to their upper limits in speed or handling. How I lived past 19 is something I find hard to understand (now 68), given all the stuff I did in my Mustangs back in high school and college years... 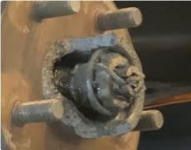 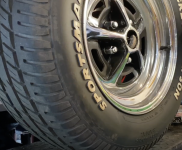 Here is how the Mustang looked after being towed to our house for repairs. 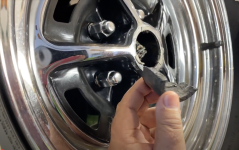 That piece of metal is part of the hub assembly that broke off when the outer wheel bearing failed. 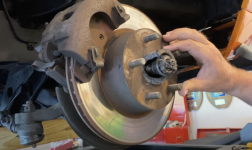 This is a photo of the broken hub with the wheel off and out of the way. 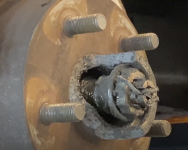 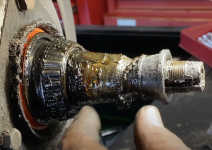 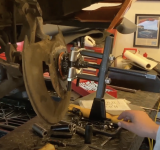 I had to use a bearing puller to remove the inner rave from the spindle. I never had a wheel bearing get stuck on a spindle like this before. 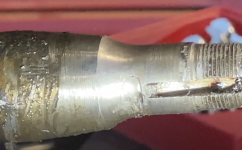 In this photo you can see the damage done to the spindle just to the left of the threaded part, where the outer wheel bearing's inner race is supposed to slide onto the spindle. It may not look like a lot of damage, but that part of the spindle had too much material now essentially welded onto it, from the extreme heat it developed after failing, I had initially hoped I could just polish the spindle a bit and use it again. But, once I saw how much the diameter had increased due to the high heat and the build up of additional metal, I decided to replace the entire spindle assembly. The parts are still available, new, it made no sense to do anything less.

CELEBRATING OUR 50 YEAR ANNIVERSARY FOR '71 TO '73 MUSTANGS

SEEKING ADVICE ON MY STOCK '73 HOOD.