A Story about the Bullitt Mustang in a Nov. 1981 Mustang Monthly

Yesterday, I was going through a box of old Mustang Monthly mags I had. I was just going through to find if there were any I wanted to keep before chucking them into the recycle box. Some of these I was given and I had never paid too much attention to them. Amongst them I found a pristine November 1981 edition which included a story about the Bullitt Mustang. Now, we've all heard various "stories" about the famed car(s), how they were built, driven and scrapped... or were they? The story eludes more toward the "stunt car(s)" rather than the camera car that was sold for 3.4 million, but at the end of the article, it just refers to "it". The stunt car(s) had roll cages welded in them, but the car I saw at Dearborn a couple of years ago, had no such roll cage. And the debate continues!

If anybody is interested in any old back issues of M/M, I have some from the 90's and from 09. PM me if interested. Free, only pay for envelope and mail.

EDIT: Pics did not load in correct order. 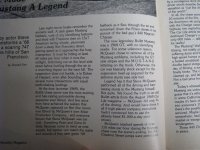 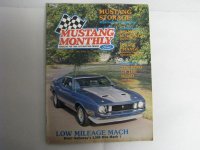 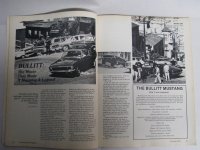 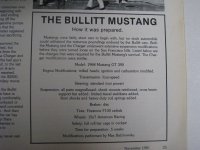 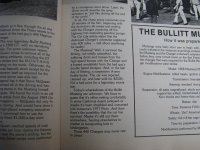 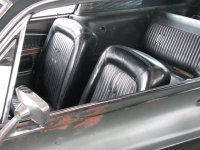 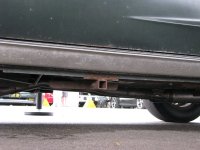 Nice article, used to read MM cover to cover back in the 80’s when I was a teenager with my first car 65 C-code Honey Gold Mustang coupe. Then they got rid of Farr and MM went to crap

. Need to look and see if I have any mags left.

When they had the car at the Mustang Owner's Museum on it's way to Meccum in Fla. I went down and shot over an hour of video. The owner gave a talk of what he remembered on the car. Was nothing special to them until they saw they could make some money, lol.
I did not scan the magazine article. One funny thing was it has a new front bumper, valance and grill. His mom or dad had parked the mustang in his dad's driveway which pissed him off. His dad went out cranked his car up and rammed into the front of the Bullitt, lol.
Here are some pics. I made. 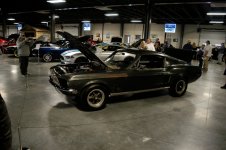 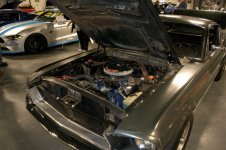 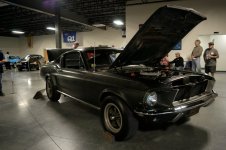 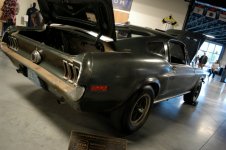 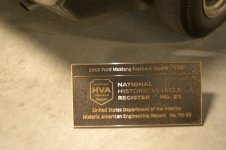 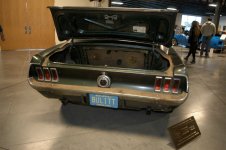 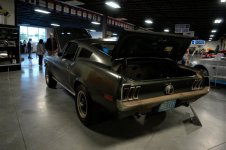 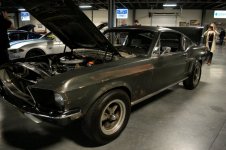 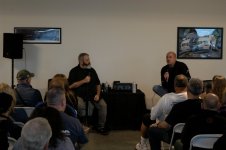 It is interesting to see it with the hood and trunk open, That was not done when I saw it at the Mustang Memories show in Dearborn, 2018. Nice pics.

It did also have a new gas tank and the engine had been rebuilt. They did fire it up. Since i was shooting the video for the museum they let me get anywhere I wanted. he had applied one of the ceramic coatings to hide water marks where it had sat partially under roof and part in the weather. There was a generator in the back seat to run the cameras onboard so it was hacked up. It also got crashed several times filming the chase scene was not done in one shot. I think it was the right quarter panel had over 2" of bondo in one area. Crash it beat and fill and lacquer and back to shoot tomorrow. They roughed the original car up with pot scrubber pads and beat on it with a pipe so it did not look pristine at the start. Here is inside trunk. Have the door ID tag but could not find. 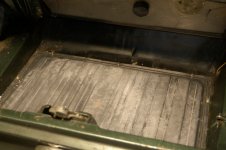 So, in the article, Farr eludes to there only being 1 Bullitt car, but I think there may have been a couple of "stunt cats" plus this camera car. Do you have any knowledge of the stunt car(s) with the roll cages welded in, or was there really only 1 car that did it all?

Something else I just noticed. In your pics, it appears that the camera mounts have been removed as can be seen in the pic I posted above. Was that the case?

The camera mounts were still under the car. There was one other car but not much left. There was no car with roll cage. I need to get someone to publish the video for me I layed down and shot the underside of the car. I was allowed to take vido anywhere I wanted on the car. He did sign a poster for me in my work room.

Carolina_Mountain_Mustangs said:
The camera mounts were still under the car. There was one other car but not much left. There was no car with roll cage. I need to get someone to publish the video for me I layed down and shot the underside of the car. I was allowed to take vido anywhere I wanted on the car. He did sign a poster for me in my work room.
Click to expand...

I see, or more to the point, I don't see. They don't show in your pics. So, Was Mr Farr wrong about the stunt car having a roll cage as shown in the article?  It certainly would be great to see your video published as I'm sure there would be much interest amongst the Mustang community.

Dec 30, 2020
Carolina_Mountain_Mustangs
C
C
Another minor win for the 71 - 73 group today. A first and second at the Mustang Owner's Museum