Found this by accident. Very impressive technology for 1940. Chuck 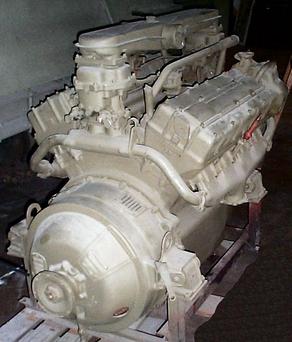 That is incredible for the era it was made! All-aluminum, 32 valves, flat plane crank, etc. A long, long time before these items made it into automobiles.

Amazing indeed. I'm guessing the production cost of it kept it out of the mass market.

Yeah, I imagine the production cost was crazy for the time. I knew Ford V8s powered many Sherman tanks but, I had no idea of how advanced they were. AffFORDability was king in the post war period. I suppose it has always been that way in the consumer market. Hence the success of the Model T,A, and B. Chuck

Hey Chuck,
That's quite a "Chunk" of an engine! I first found out about this engine by accident, as you did. I had just sold a 534 CI Super Duty gas engine to the shop to install in an F-800 truck. One of the techs who had never heard of this engine series was marveling at its sheer size and wondered if Ford had ever built anything larger. I started searching online, and that was when I found the GAA 1100 used in the M4A3 Sherman Tank.
That is where I got the idea to use that engine when I needed something for 1100 when we were doing the Count to a Million Postings. The engine I used was dressed up a little with some chrome, three 4bl carburetors, and an "1100" valve cover emblem fashioned from the fender, valve covers, and air cleaner emblems used on the '63-64 427 Galaxies.

I first saw one of these GAA engines when visiting the D-Day Museum (Now the WW II Museum) in New Orleans in June 2000. They had one of these monster engines next to an M4A3 tank. I've been there several times since, and they have some amazing displays. There is a display of a Ford-built Jeep where the body lifts off to display the chassis with a mighty 4-cyl engine and the "Ford" script tires!

The technology used in the design of this engine is impressive, considering it was from the forties!
I did find where someone was installing one in a '69 Mustang drag car but could never find whatever became of it.
The illustrations are my original Count to a Million 1100 post and the '69 Mustang with the GAA installed! 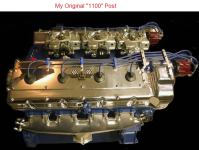 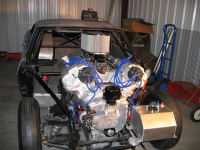 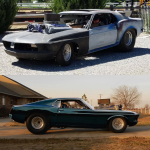 I think it maxed out at 2400-2600 RPM, before the mechanics figured out how to defeat the governor. It is amazing how far back quad cams, supercharging, and turbocharging go back in time. Secluff, Thanks for posting photos. Chuck

Engine numbers, do they match?