Another one: 71 Mach 1 from Germany

My name is Michael and I live in northern Germany in the region of Hamburg. My addiction to american cars is a heritage taken over from my father. He had Buicks and Cadillacs since I was a little boy. He gave me piles of brochures of Chevys, Mercurys, Dodges and Cadillacs he got from the dealers to look at already before I could stand. Other kids had Mickey and Bugs, I had the Barracuda.

My father gave me his Buick when I was 16 to do some restoration and get some practice and have it as my own when I turn 18 and got my license. He wanted me to have a real car and not one of those "unsafe european rustbuckets" like he called them. Others followed. Camaro, Corvettes, Firebirds and a Cadillac. All nice cars!

I never owned a Ford product before, but I always loved the big Thunderbirds from the seventies. 2005 I had the Idea to sell my 1992 Corvette, because the car was a two-seater and there was no room for my son in the car. So I had a nice vacation trip to Michigan to buy a new (old) car. I found a pristine 1973 Lincoln Mark IV which I could not resist to buy. It was a perfect match to what I looked for. The dealer in Lansing, MI, assisted me with the transportation and papers. I still own the car today and I love it!

A second thing - aside from the love for the big ones from the seventies - was an unexplained affinity for the 71-73 big horses. I saw the first example of this car in the incarnation of a red and white 73 convertible with a broken camshaft in the backyard of a gas station of my hometown. That was around 1980. The car stood there for a year or so, because nobody knew to repair it or had a clue where to get the parts. Almost every second day I jumped onto my bicycle and rushed to the gas station to have a look at it. Man, this was a cool ride! And even cooler: someone told me there was a fastback version of the Mustang, too. Wow!

One day it was gone. I suppose they scrapped it. I never asked - because I didn't want to hear the answer.

But I never forgot that one...

In 2009 I sold my 89 Cadillac deVille. I simply wanted to have a real car again. One from the golden era of cars, the seventies. One stable in my very nice garage was empty. Which car would nicely fit in? A Camaro? Hmmm...

At this time on a November evening, I saw a yellow 71 Mach 1 on the german ebay. The car was far from roadworthy condition, had some defects and was very dirty from standing in a barn for 10 years or so. I mailed the seller and got some Information on the car. The most interesting facts were that it is a true Mach 1, 351C engine, A/C, deluxe interior, instruments. And: it had all german papers and permits. He also told me the car has only little rust. I made my bid. It was more for fun, since I did not seriously expect to get the car. Two days later I got a mail that I was the high bidder and won the auction.

I paid for the car and organized a transport from Cologne to my ground. A week later the car was in my garage. The first impression was the strong musty odor from the car. The interior looked not that bad, but the mildew was in all parts. I started to take the car apart and soon it was clear: this will be a full resto job!

As the seller said, the car had only minor rust, at least for a 40 year old vehicle. There was a rust-trough in the right part of the cowl, some perforation in the floorpans and a little hole in the rear wheel housing. After the car was media blasted, some other issues surfaced. Both quarter panels had accident damage, the taillight panel was installed very unprofessional after the fender bender, some waves were in the roof and the car had a horribly repaired damage at the right front structure.

Decision was made to have the car's body completely refurbished by a professional body shop. When it's finished, the car will get its original factory paint scheme in Acapulco Blue with Argent accent paint. Then it will return to my garage for final assembly to as-new condition.

Most of the other parts have been refurbished in the meantime. So it will be a clean assembly with almost new parts. But there is still a lot of work to do...

I was very happily surprised that we now have a forum specially for these great cars. I saw a link on the german "Dr. Mustang" forum a few weeks ago and promptly decided to become a member on 7173mustangs. I am also an active member of the german motor-talk forum and there the restoration of the car is documented. Unfortunately for the users here it is in german language. I think I will repost some selected issues of interest here to share the most intersting stuff and experience.

I have read a lot here in the topics and I am sure this is the place to go on this planet if you own a 71-73 Mustang (or want to own).

I hope, I can contribute my part.

Nice to have you on this forum too. We have crossed path on Dr Mustang already (71mustang).

A warm welcome from your neighbor in Luxembourg! ::welcome::

Welcome to the club, Michael. Sounds like you've got a great project. Too bad you couldn't trace down that red and white '73 convertible.

Glad to have you here!

Great story - - THANKS for sharing.

It sounds as if you will bring a lot of "positives" to the Site and I look forward to interacting with you on the Forums.

Welcome to the forums! Glad to have you aboard! Great story and I'm looking forward to some pics!

Thanks for coming aboard. It is a joy to have you here.

I loved the story and I am looking forward to the pictures. There is absolutely no doubt that your Mach 1 will end up being one if not your favorite U.S. ride!

Welcome from URUGUAY in south america! We are far away but close in some other issues... I can tell you this site is great, not only for the useful topic for us mustang owners but because of the great people behind each computer...

Keep in touch and try to get pictures of your car.. that´s always helpful in every matter...

There are several of us in Germany. I think one day we should all meet up somewhere and check out the cars.

Welcome Michael, it's good to have you join us.

Wow! What a nice audience from all over the world! Thanks, guys.

Here are some pics to start with:

This is how the car looked when I got it. The yellow paint was everywhere. Door trim, headliner, lamps, gauges, etc. What a mess! 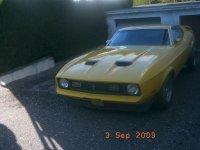 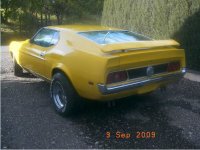 Here the car arrives at my garage. The Mark IV gets a freind for chatting. 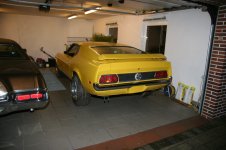 This is how the car looked after beadblasting last December. In the meantime, most of bodywork is done and it comes closer to the point of paintwork. It is planned to start painting end of April. 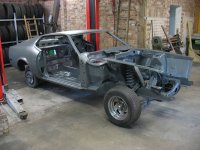 And this is a little glimpse into the future. The car will look exactly like this one when it is finished. This image is the template of things to come. It is in poster size on my garage wall to show me the way to go. 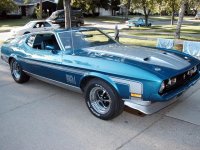 Some more pics from the metalwork:

The cowl vent opening. Achilles heel of the 71-71 horse. driver side cowl box was relatively solid, passenger side with vent looked like this after the cover was removed. 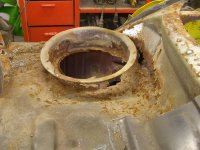 Since no replacement parts are available for this, the parts were made by the bodymen with the help of an Eckhold Kraftformer and some hammer work. The part was fitted to the surroundings. Everything was the again blasted, soldered and painted. 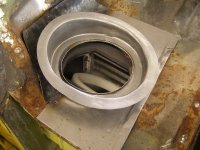 The passenger quarter panel was heavily deformed under the yellow paint (well sculpted with pounds of bondo) and a new part from Scott Drake was welded in. The fit was poor and hours of trimming and alignment work were necessary. After removal the parts behind it were thorougly blasted to remove any trace of rust. 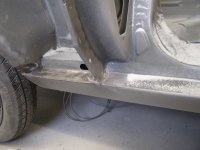 After panel alignment was acceptable, final welding was done and solder was applied to the seams. No bondo will be used on this car! The whole body will be metal when it is done. 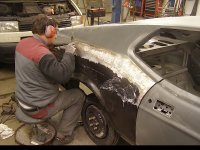 Although the trunk floor was quite solid, some rust damage was there due to water intrusion from the lousily repaired tail lamp panel. The panel was arc welded in several spots with heavy burn-through and the lower edge was attached with pop rivets (!). The trunk floor parts were clenly repaired. The new bumper supports from NPD will also be welded in. 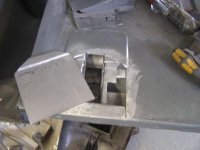 This is the installation of the new taillamp panel. All original weld spots were reproduced as good as possible. Little imperfections and seams were filled with tin solder. Work was done very precisely. 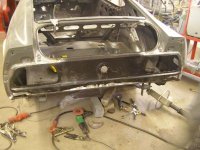 Looking great so far!!! I wish I was that far along on mine. I lived in Heidelberg, GE for 3 years and loved the country! We will be going back for a visit in the next year or two.

From one Michael to another and from one 71 Mach 1 to another Welcome.