I've seen only a few restomod builds of our year cars and hope to see more builders look toward our Mustangs in the future.  I'm still waiting for that one build that knocks it out of the park! Even though I'm a Chip Foose fan, and thought if anyone could pull off a great '71-'73 build, it would be him.....MachFoose just didn't impress me. I was hoping that he'd take some of the already muscular features and design of the fastback and really punch it into the 21st century.

One car I was impressed with, from the SEMA show a few years back, was the '72 Javelin that the Ring Brothers built. Being that the Javelin shares some similar styling with our '71-'73 Mustangs, it would have been interesting to see their vision of a Mach 1 build. I like how they tied in the 70's design with modern flare.  If I had to critique, I would have preferred a built AMC engine rather than the Hellcat powerplant.  Nevertheless, I'd be very interested to see (even sketches) how they'd build a '71-'73 stang. So far, all their builds look top notch.

I made this in Powerpoint to illustrate some of the ideas I thought might accentuate the design of the incredible '71-'73 Mustang. Things like more prominent hood scoops, large honeycomb grill, bigger wheels, graphics, front spoiler redesign, side marker light deletes, etc. 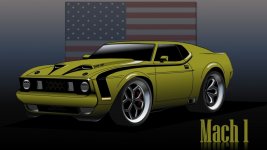 Nice work!  That does look pretty cool!  Being a closet Mopar fan, it kinda reminds me of a Challenger!

The line of our car is so nice and well proportioned it's hard to actually enhance them. By chopping the nose, Foose made a very cool car, but failed to respect the 7173 line for sure imo. Angelo's project is as of today in my eyes, the only project so far that I've seen boosting/using the lines and ending up looking badass. Hope to see him finish the beast in a not too far future!

There is plenty space for simple and good looking mods without using a saw tho, I like for instance the variation of the hockey stick on your drawing or the big 351 on one side of the hood a member posted a while back as alternative to the classic and original "hood_black_out_hockey_stick_spoiler_cant_fail_sauce".

Personally I like them with less on than they came out of the plant the nicest.

Fabrice said:
I like for instance the variation of the hockey stick on your drawing or the big 351 on one side of the hood a member posted a while back as alternative to the classic and original "hood_black_out_hockey_stick_spoiler_cant_fail_sauce"
Click to expand...

Thanks, and if you're referring to the '302 Windsor' graphic on a ram air hood, I was the one that designed that too.

(search: 'A Spin on Graphics')

Always liked Evan Longoria's car. It was sold and haven't seen it since. 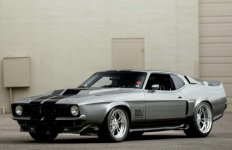 @MeanMachine "I was the one that designed that too. "

Lol, 302, 351 who cares!!  It was looking refreshing and good to me. In fact, I'm thinking of doing similar to my 429, I'll prolly be lynched in public for doing so, but I like the elegant simplicity of it and can't really accept after loads of work resurrecting that beast to end up it looking like another "mach 1 tribute" when done. even if it's a real f code mach 1.

@Horsin' around
Nice one! Nice grey! Would love to see a closer detail of the metal work done on the front fender where the extensions are now one with the panel.

I dare to be different sometimes, as long as my changes compliment the car.  By the way, I really admire the 385 series engines, in the early 90s I was building a 460 with 429 SCJ-spec heads for my M-Code Mach 1, unfortunately I sold the car before completion, but building that big block left a lasting memory.

Always liked this one... 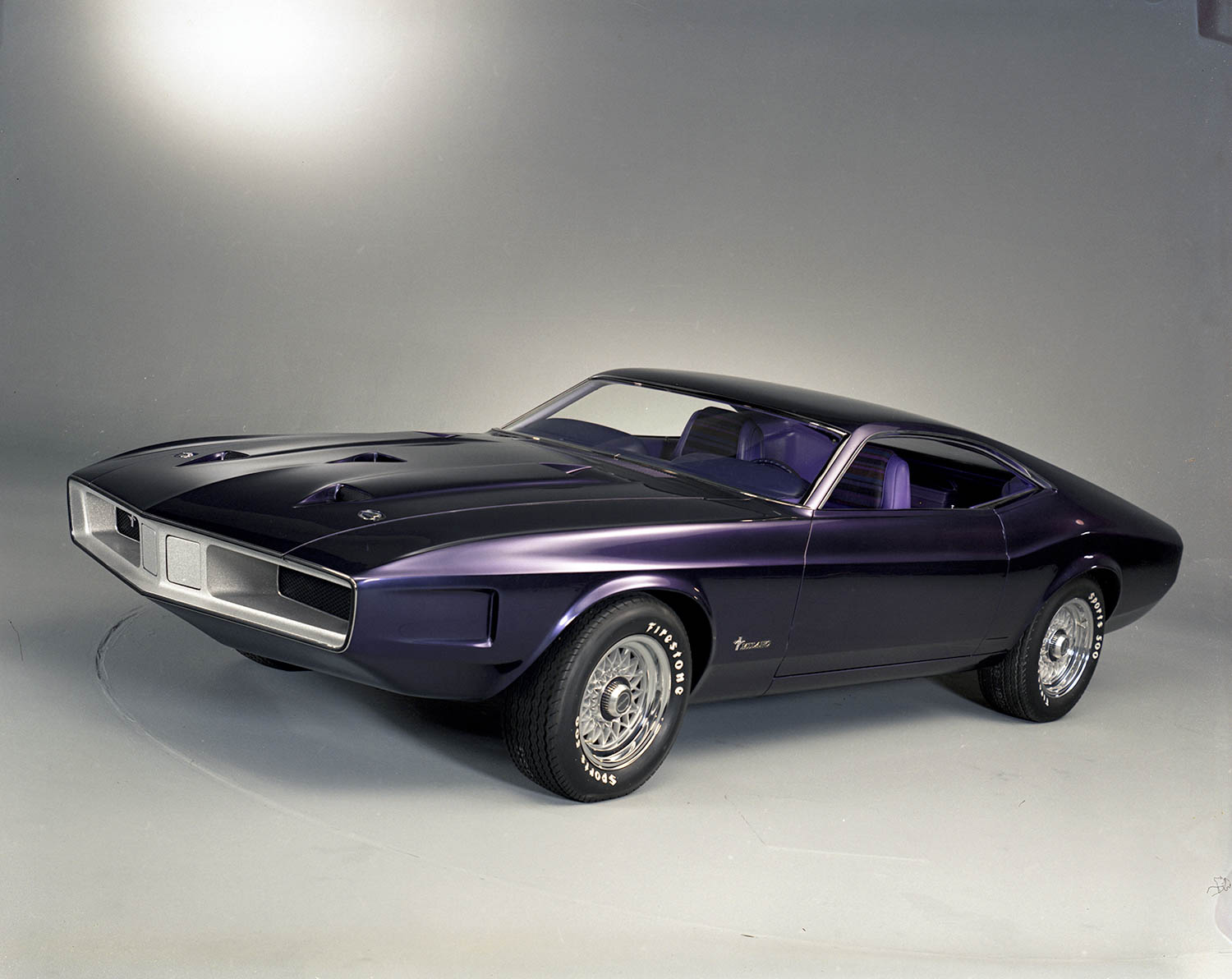 I am too old to change I think they all look like toys. But if that is what sells demand will drive supply. If it does not you will not see but one or two and they will cut their losses and move on. I just do not think the huge wheels will ever look right on any car. I mean they had 20" wheels on the model T.  Like I said I am too old to ever change. Do not see a reason to change.

Years ago, I read an article, probably in Hot Rod Magazine or Car Craft, where some guy had grafted a Plymouth Superbird/ Dodge Daytona nose to his '71/'72, I think for dry lakes streamlining. If I remember correctly, the article states that it was a pretty good fit as is, and needed some fitting, but not as much as you'd think. With the flatback/fastback styling of the 71-73 Mustang this made for an even swoopier profile than the Mopar. I'd love to see that again, maybe someone out there, who's computer savvy could photoshop that nose onto a picture of a Mach and post it up here.

I really liked how the Pegasus shortened the front end overhang. To me that made the nose length look more proportionate. I think that if that were done and the grille design were a bit more faithful to the original it would been cooler. There were other bits that were done on that car that were cool too.
R

I never heard of the Foose Mach1. I just saw pictures of it. Man what a horrible look. Sorry, I respect his talent, but yuck!

Maybe off base, however I like the Foose version.

CELEBRATING OUR 50 YEAR ANNIVERSARY FOR '71 TO '73 MUSTANGS