Two out of three of the mounting holes in my instrument cluster bezel were completely broken off. My first attempt at repair several years ago was to try welding random plastic pieces to it using a soldering iron. Now that I am restoring all of the dash and everything behind it, I discovered that my method failed and both pieces had mostly broke again. This was likely due to the melting of plastics only being superficial. Obviously I needed a better method or to just give up on it and get a new one for approximately $90.

While digging around on the internet researching dashboard repair, I found one guy who was fixing a motorcycle fairing using ABS glue. Now, I know as much as the next guy that glue glues things together. But what if something was completely missing? You can make anything useful out of glue, right? Wrong! This guy was missing a mounting bracket that had been torn off. He used clay to make an impression of an intact bracket, placed it where he needed it, and filled it with glue as an experiment. What he got was a rough but brand new bracket.

Fascinating! Turns out that ABS glue is not so much a glue per se. It's really a solvent (acetone and such) that melts plastic and makes a weld, kinda like model glue. But better than that, it has lots of ABS plastic dissolved in it that will become part of the weld and fill in gaps in your sloppy ABS piping project at home. That being that case, the stuff is able to be cast. And best of all, automotive plastic is mostly ABS.

My research tells me (correct me if I'm wrong) that ABS welded with ABS glue has about 95% of the strength of the original. I thought I would give it a try as I had nothing to lose and the repair would never be seen as it hides under the dash pad. I used play dough for my mold since I had some laying about. Turns out that one of the good things about play dough is that it's water soluble and can be washed out of all of the nooks and crannies it might get stuck in. 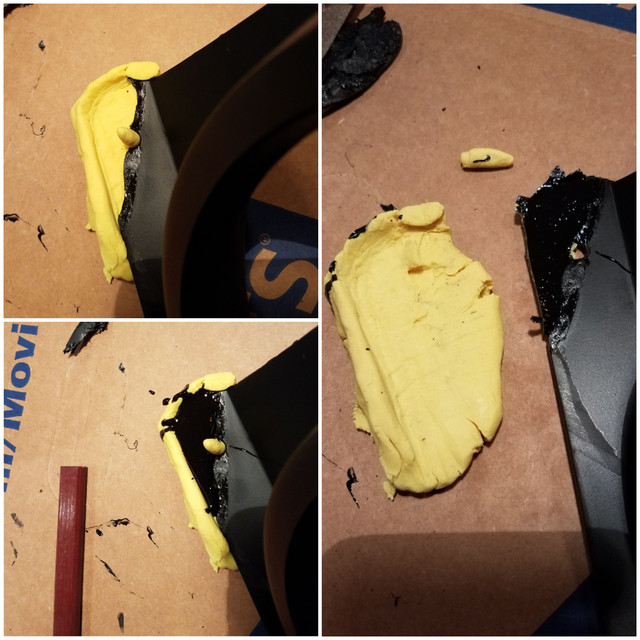 Both circled areas were gone.

Then I went completely nuts.

Ding around the tach gage...filled.

Big crack in center dash panel...gooped with glue (from behind), pressed ordinary window screen into it, gooped another layer once it was dry. Will never crack again.

I glued everything that I could!

1- ALWAYS clean part(s) first with ABS cleaner. It comes in a nice pack with the glue. Use a cotton swab or a cloth or the swab that comes in the can (a bit unwieldy). This removes old paint and starts the melting process. In fact, you can weld two pieces of ABS together with just acetone, once you apply enough to make the parts a bit goopy (that is a technical term).

2- The repair will need sanded if it is to be seen. Textured panels are tough. Repair from behind. I had a couple of holes to fill in my center console. I put tape on the outside (textured side), and filled from behind. Once it was kind of dry I poked it with a screw driver giving it a little texture. Looks passable.

3- Work in layers. The acetone needs to evaporate. That can take longer than it takes for the surface to skin over making it get sort of trapped. If poured on thickly (like I did in the example above) it will appear to "breathe" once a light skin forms and the acetone evaporating fills in behind it until it escapes. It's a little unnerving  :chin: . It will also end up swiss-cheesy like as bubbles form inside because of the trapped gas.

4- It's going to be a bit swiss-cheesy regardless. No matter how much you fill and sand and repeat, it will never be flush or untextured. I guess that ABS is likely swiss-cheesy (I swear that's a thing) anyway, but on a really small scale that's not normally noticeable due to injection molding and casting makes bigger bubbles. Also, your borders will never sand flush because (I'm guessing here) the evaporating acetone will melt the adjoining plastic and collapse it's little micro-bubbles causing the border to shrink a little tiny bit. It makes a little shiny ring around your repair. Simple fix is to use a little putty after the first sanding.

5- Have lots of cotton swabs and toothpicks for applying glue and poking it into tight places.

Well, that's all I know. I hope this help others.

Interesting, thanks for sharing.

David (Carolina Mountain Mustangs) has used ABS shavings and powder mixed in acetone for repairs. I wonder if the glue could be thickened up some with ABS powder or shavings? Could reduce the amount of shrinkage when it dries.

Interesting, thanks for sharing.

David (Carolina Mountain Mustangs) has used ABS shavings and powder mixed in acetone for repairs. I wonder if the glue could be thickened up some with ABS powder or shavings? Could reduce the amount of shrinkage when it dries.
Click to expand...

Apparently you can melt airsoft ammo (pellets) in acetone to make your own glue in any consistency. The plastic doesn't really shrink much if at all. I think that if you made it real thick you couldn't get it into cracks and crevasses as well. It tends to skin over pretty quickly.

ABS is the same material most hard plastic toys and models are made of. To save on time and to make things easier, you can cut material from other old parts and glue them in to match color and texture. Just like patch panels in the body.Your playdough will work great as a jigging support.

Quite interesting! There are always ways to fix almost anything with a bit of ingenuity and thinking out of the box.

As a former (retired) Automotive prototype maker, hot air welding is my method of choice, but sometime gluing is preferred and easier.

Anyone looking for sheet ABS, you can buy it from Amazon in 12"x12" sheets and varying thicknesses and it is textured. I have repaired a few center consoles and other parts with that. I do agree though, fixing the pebble texture is very tough so yes, fix it from behind if possible and finish the front as best as one can. Another source for sheet material is McMaster and Carr.

As for glue, there are several specialty plastic adhesives on the market. JB WELD Plastic Bonder is excellent for gluing most plastics and once set it can be sanded, drilled etc. For Instant glues, a bit hit or miss, but K-Tool's Q-Bond works quite well. It comes with a couple of fillers that are mixed in. The problem with instant glues they are not flexible to any extent. In Canada, we have a flexible adhesive repair for auto body parts made by Dominion Sure Seal. I can't off-hand remember the exact name, but it works extremely well on many plastics and is easy to finish for painting. I'm sure either it or something similar is available in the US. Gluing Polyethylene is all but impossible and welds like welding chewing gum, horrible stuff!

I agree with your assessment of polyethylene. There are a few products available to us now that work on them

I agree with your assessment of polyethylene. There are a few products available to us now that work on them

That Loctite product is quite good too. I have used it on a rubber blend plastic called "Santoprene"

Didn't have much success with it on PE though, perhaps my bad technique Eh! On polypro, I have use Loctite Hysol, but that professional only stuff.

So yes, there are better products available to us these days. Just takes a bit of research to find the right one for the job.