Hi Everyone, I am trying to figure this out. Should this adapter be straight or slightly angled? According to Ford illustrations they are straight. However, I have also seen the angled ones. Can someone provide me an inside and outside air cleaner image of this on their BOSS?  Thanks

﻿The original adapter used in all 71-73 production is DOAZ-9D692-A which is straight and black. The replacing service part, DOAZ-9D692-B is when the 45-degree version was released. A few early versions were black during the transition, but most were dark blue, with a few light blues in the mix. That was more than likely a vendor issue with the different colors. The "B" was replaced by DOAZ-9D692-C, which was still 45-degrees and is now gray. The "C" version remained in production use throughout the '80s and 90s in the car and truck lines.

If you are involved in a concourse restoration or want the OE look, the "A" version would be correct. If a daily or occasional driver and you need the adapter to connect the vapor hose to the carbon canister, the B or C are correct Ford service part replacements.

I have an OE ram air housing, but unfortunately, it is in storage and not close to my location. The adapter would twist into the air cleaner housing the same regardless of ram air, non-ram air, or engine application.

I hope this helps with your decision about which adapter you need for your application. 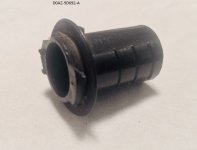 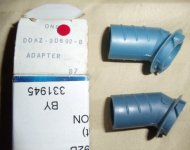 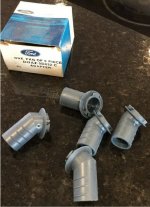 Excellent explanation! Thanks for the education.

@secluff I had the same question.  Historical fact and pictures, your explanation was perfect!!!  Thanks

Steve, Thanks for helping out with questions like this. It helps a lot of people, myself included. Chuck