Seen several post on after market door panels from supplier x and how poorly they fit.  When I first got my mustang and  before I knew of this forum or all the suppliers out there, I ordered a complete interior kit from a company  and it wasn't Ohio Mustang or NPD.  Even though I knew it would be quit awhile before I would need it, I figure I would order and save some money in the long run by getting it then instead of several years later. When the kit arrived I checked the boxes against the packing slip to make sure everything was there.   All interior products were suppose to be TMI. Fast forward 3 years later.  Getting ready to install the door panels and find out that they are not TMI but company x house brand.    Contact the company hoping like hell that there is a mustang god and he will take care of me.  No such luck.  Stuck with what they shipped me.  Was told substitutes were allowed and it was way to late to even consider returning them.  As stated earlier I have seen several post by other members on having issues installing these house brand panels.  So here is what I did to make them fit and hopefully this will help someone else who might make the mistake trying to save a few dollars and buy this companies house brand. 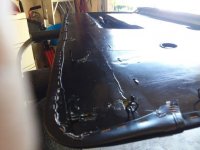 After trying to hang the panel I found that the clips were to high and would not line up with the holes in the door.  To resolve this problem I elongated the hole so the clip would sit lower in the slots and align with the door holes. 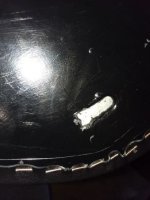 After elongating the holes so the clips would align with the door holes I installed the panel.  As you can see that the panel is shifted forward and does not cover the rear edge of the door.

To adjust for this I had to also offset the holes to side shift the panel as shown. 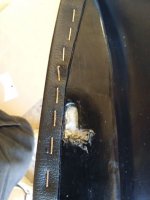 Panel now installed and is center on the door and covers the end. 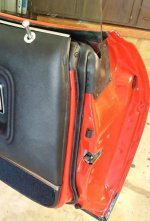 Still have one more problem - window handle hole to high.  Can't shift panel up or down and there is no adjustment on the window handle so will have to come up with a backing plate to cover the hole. 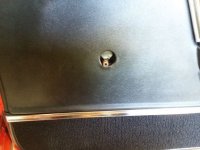 Still have to take care of window handle hole but here is the finish install. 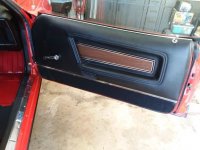 Morale of story - buy a good quality panel and from one of the better vendors on this site such as Ohio Mustang that will take care of you if you were to run into such problems.

Anybody have experience with kentucky mustangs deluxe door panels?