Hello everyone who's about to call me crazy, stupid or naive for what I'm about to say!

My car has a 1972 351 Cleveland 4V. I've read online that a 351 Cleveland is meant to take about 5 quarts of oil, but when I did an oil change on my car the other day I noticed a definite discrepancy. I seemed to be at the high end of the "safe zone" on my dipstick after only 3. What am I doing wrong here? Do I have the wrong dipstick? Am I getting an inaccurate reading because I'm checking the oil when the engine is cold? I should also mention that when I drain my oil, I drive the front wheels up onto a set of Rhino Ramps, so the car is at an angle when draining... Could that be preventing the oil from draining completely? I also put the car down flat before I put the new oil in and the dipstick still came out bone-dry, so maybe that's not the issue. I'm using Pennzoil 10W-30 High Mileage, is there a better oil you guys recommend or prefer?

Have you run the engine for a couple of seconds after adding the new oil to fill the filter? If not, check the level after ~15 seconds of running.

Hello Murdoc,
Not a dumb question. There is a lot of experience and knowledge here and asking questions is how we all learn.
If you have a Ford passenger car that was not equipped with a performance engine (428,429 CJ/SCJ, Boss 302,351,429) then the factory fill is 5 quarts WITH filter.
Whether it held a quart or not, Ford oil change capacities always allowed for 1 quart for the filter. The Ford oil change specification chart used by shop techs would show 4 quarts, 5 with filter when changing the oil on a standard 351.
I know everyone doesn't have access to a vehicle lift. I used a set of ramps for years. The optimum procedure would be for the car to be level so all the oil drains back to the sump and none is in the shallow end because of the car angle. I always changed my oil with a warm engine so the oil would drain thoroughly. After refilling the engine I would crank and run the engine long enough to check for any leaks. After shutdown, I would wait a few minutes for the oil to drain back into the pan and then check the level.
The original dipstick is D0AZ-6750-A and would be marked "D0AE-A". It was replaced by D5AZ-6750-B which would be stamped with "D5AE-AB". The dipstick tube was the same for all '70-74 351Cs. The only dimension that is given in the Ford Master Parts Catalog (MPC) is the 18 1/4" overall length. You may have to check the length from the flange where it seats to the block against a known correct tube.
I hope you get everything sorted out.

Thanks for the responses everyone! So here are some pictures of the dipstick I have. It’s DOAE-6750-AB. What’s strange is I looked up the same part number on ebay and found one with the same number, but the one on ebay says “use 101B oil”, mine says “use SE 101C oil”. Not sure why the same part number would require different types of oil. I definitely messed up here though because I did not remove the filter (picture attached) when I changed the oil. The filter is fairly new though, I installed it about 5 months ago when I did my last oil change. So what should I be doing in regards to my filter when I change my oil and/or I’m installing a new filter? 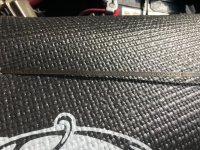 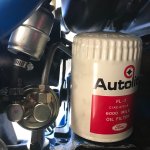 Usually the filter is changed with the oil.

If you want to be super-anal you can add some new oil to the new filter before you spin it on, but on most Ford V-8's the filter is at an angle, so if you overfill the filter you end up making a mess with new oil...

So if you didn't change the filter it would have been full of old oil still. If you added three quarts of new oil I would still expect you to be low by at least 1/2 a quart.

I do basically the same thing as Steve when I change my oil, except that if I don't get the engine up to operating temp I may let the car sit overnight to ensure the oil thoroughly drains. I have a lift so the car is (relatively) level which could be giving you issues with getting all of your old oil out. If you need the ramps maybe find some way to (safely) raise the rear of the car so that its level?

Murdoc,
I wouldn't put a lot of concern into what you see for oil specs on those 50-year-old dipsticks. The engineering number is more important as it is used to cross to the correct part number and verify the application.
The SE-101 B, C, etc, is nothing more than '70s era lubrication specifications. This was an evolution of the ever-changing formulation that was required for the engine oil to meet the emissions of the era and a then, 6000-mile change interval.
The SE category would indicate "S" as a gasoline engine oil and "E" as meeting 1971-1979 model year requirements. (SF would cover 1980-88) The second letter would constantly change as emissions control devices would put more load and heat on these engines, making oiling even more critical. For my '71 M code, the Ford spec is ESE-M2C101-B, for a '72 Q code Gran Torino is ESE-M2C101-C.
I normally pour about 1/2 quart of oil into my oil filter before installing it (very quickly). That's something I miss on my FE engines with the filter setting straight up on the filter adapter. I eventually stopped checking my five-quart engines after an oil change. I knew 5 quarts were the factory fill and that was exactly what I had poured into them. When I did check the level it always showed full. (Sounds a little lazy, doesn't it)?!

Everyone always has their opinions of oil and filters I will share a couple I know for real.
I am not religious on oil changes. I have not changed the oil in my 73 vert in 4 years. Seldom gets driven so why change.
The myth about getting water in it from sitting I proved wrong when I sent the oil out of my Mach 1 off to be analyzed, 38 years it sat. Report came back zero water but high lead content due to leaded gas when the oil was last changed.
My F-150 I have never changed oil as they recommend. When it is a quart low I add a quart when a quart low again I change oil and filter. 308,000 miles and only thing on engine touched was one coil pack, one emissions hose and alternaotr. I use the Ford 5 W 20 oil.
On my lawn mower and I was engineering manager at a lawn equipment factory so I know them. I never changed the oil filter in almost 500 hours. The mower deck rusted out and cost more to replace so I got another engine still fine. BTW the design life for a low cost mower like at Lowes or Home DePot is 350 hours. John Deere even uses same design standards and testing.  I change oil maybe 4 or 5 times in that mower.
The instructor at local tech school I went to high school with decide to see what would happen. This was probably 20 years ago he bought a brand new Ranger Ford PU. He never changed the oil ever, just filter and add oil as needed. He sold the truck with 160,000 miles and later bought it back and over 200,000 miles. Never an engine issue.
I have also been told by people on ships in the U.S. Navy that the oil that is put in the engines the day they leave port is still in there when they decommission them. Some went from WWII until end of gulf war for battleships without an oil change ever only filtered.
I think we have been trained to change to sell more oil not because it is needed. Why would oil wear out just need to filter the contaminants out and go. Years ago you could by recycled oil that had been filtered look like new oil.

Looks like I will test the old F-150 next week. My drivers license ran out and cannot rent a F-350 to pull enclosed car trailer and my Mach 1 to Carlisle, Penn. A 1,050 mile round trip if it makes it. Might be stranded in Virginia. I think it is up hill going both ways also.