I'm taking a good look at the options for my 73 and the Dynacorn 'Full Shock Tower Apron Assembly' looks like a great way to rebuild my front end.

My car is so rotten that nearly every panel needs replacement (which is fine, I have the patience and skills) and has led me to the full assemblies for the front end which should in theory be the way forward.

I have a vision of a new front clip, and I've seen this documented on earlier Mustangs, but I can't seem to throw up many examples of their use on 71-73's to gauge quality/fit/finish/problems etc. So can anyone offer some experience of these pieces on our cars before I take the plunge?

I too am looking at doing the same thing for my car.  The only thing I would advise would be to make sure you build a frame jig to hold and support the car while you cut the front end off. Then use the Chassis dimensions to put everything back to spec.  I think this would be the way to go if the complete assembly is put together well. Would definitely save some time. I don't know of anyone on here that has used one yet..... at least that I recall seeing.  I know Eric (mister4x4)  did replace the front clip on his car but he used a donor car front clip.  Curious to hear what others have to say?  Possibly Don at OMS can chime in since he may have sold some of these ?

Be sure to save your apron VIN stampings and weld them in to the replacement aprons.

I'm Definitely up for building a frame jig and I've seen plenty of great examples on here. I plan to put one together from box section and set the car up using the frame dimension drawings.

I think there are probably three paths...

1. Build a front clip on a separate jig and install in one piece - allows firewall replacement but could be a mission to get alignment, although you would have the original car for reference.

2. Assemble front clip on frame jig - reference points would have to be built into the frame jig, allows firewall replacement but again could be a mission with alignment.

3. Replace one side at a time on the frame jig - fixed reference points and probably the safer option, doesn't allow for firewall replacement.

I'd like to replace my firewall which is complicating things, if I were to leave it in place I could build from the firewall with some ease. I can't see any other way of replacing the firewall other than to remove the entire front clip.

As for the VIN, might struggle with that one...! 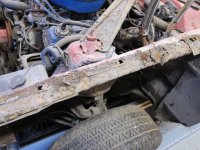 I have sold 9 or 10 of them with no complaints

Turtle are you going to rebuild your car... I have a  complete frt clip

OMS said:
I have sold 9 or 10 of them with no complaints

Turtle are you going to rebuild your car... I have a  complete frt clip
Click to expand...

Hey Don. I’m really leaning towards tearing it down here in Late May.  Are you talking about that clip off the 73 you had?  Are the front frame rails the same as 71-72?  I think they are, believe they just changed the bumper assembly in 73.  I would be making a run out to your shop with a trailer to pick up a lot of parts.  How much are you asking for the front clip? Is it off the car? Do you need me to come out and remove it? Or buy whole shell? Shoot me a PM with some prices if you could or post on here. Thanks.

I saw your other post tearing down and did not comment. If I dug into one that rusty I would go ahead and put it in it's grave. Will cost triple what getting a solid bone would cost. Will take lots of time also. That rusty of a car I do not even consider for a parts car. Only glass does not rust and is usually scratched. I have passed on several great bodies in last few years. I have too many projects as it is.
I have a 1972 Mach 1 T-5 Q code 4 speed that has been sitting in the back yard since the 70's in way better shape that  one I only paid $820 USD for it back then and never been worth fixing.
You must have more time than I do for sure. The other chassis there is a 1965 A code 4 speed vert that has not been on the road since the 70's and cannot justify building it either.
You can get a way better car to start with for half the cost you will spend on parts for that one. Why do it??
To ship a front clip to UK will need to be a container to make a crate to ship on would cost lots due to insect requirements. 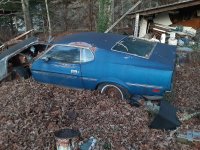 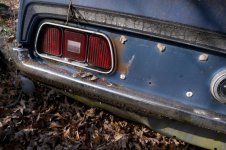 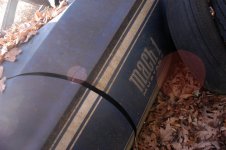 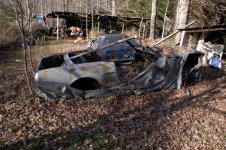 Austin Vert on Water is Your Mustangs Enemy.

B
Dynacorn parts and measurements for chassis straightener