The term CJ or Cobra Jet was applied by Ford for their better versions of an engine. In the case of the Mustang I would rank the 351 CJ version just behind the HO version. It did change from 71 to 72 and Ford dropped the designation sometime in 1972. I have one of the 330 1972 CJ automatic verts built. When I ordered the Deluxe Marti he does state the car has a CJ 351.

I was cruising down ebay over the weekend during all our rain storms and noticed that nearly every ad for 1973 Q code convertible said it was a CJ or Cobra Jet which never was. My 1973 Q code Mach 1 has no reference to CJ or Cobra Jet in the advertising, window sticker and the air cleaner just states 351 4-V.

So I had sent a note to one of the sellers located in Charlotte. The car is on consignment and also has incorrect wheel covers they say are original. The dealer came back and connected me to an article in Hemmings saying that the CJ was still around in 73. They are basing this on the fact that it shows in the Ford repair manual showing that a Mustang Q code is a CJ. So I went to check the Ford manual and sure enough the Ford service manual does have a chart showing the Q code mustang as being a CJ. But while checking the manual it also lists the HO 351 as being in 1973 also. There was discussion at Ford of having an HO model but it got cancelled. So that is how one dealer is backing up their claim that the 1973 Q code 351 is a CJ or Cobra Jet.

If you order a Marti for 1973 Q code it only says 351 4-V like all the other Ford documents but the repair manual states CJ.

We all know errors are all over the Ford documents. The parts books list some of the parts for the Boss 302 in 1971 model. They did have two that were used for testing and Ford changed the engine in one to a 351 H code and sold it. Marti did verify that that car had two different configurations and of course Bob Perkins owns it currently with a pile of the Boss 302 parts for the 1971 he located.

So I cannot argue with the people selling the car as a Cobra Jet based on their stand that the Ford service manual shows that. Even though the 73 351 Q 4-V falls way short of the 72 Q CJ version.

Here is copy of what their reply was with link to the Hemmings article.

Thank you for reaching out to us regarding the 1973 Ford Mustang. While our consignment customers give us information (some good, some not so good) we also try to do research ourselves. We want to be able to identify vehicle models as best we can.

This article explains as to why we are listing it as we are. It is simply because the motor is/was considered a Cobra Jet until 1974.

I have a 73 Q code convertible and I agree with David. I have heard of the 351 4V called a CJ or cobra jet but I have never seen it called that by Ford. On the Ford sticker its listed as 351 4 V 8 cylinder and its the same on my dealer invoice.

Based on that kind of information, I guess Ford didn't produce Boss 351s (which we know they did). My '71 shop manual does not show an engine code of "R", nor is there anything about it in the engine section of the manual. However, it does list a "Q" code engine in the Engine Code section, calls it a 351 CID-4V GT, but nothing on what that was supposed to be in the engine section, either.

Trying to use something like that as the basis is bogus, they need to perform some proper research.

Don't expect a used car salesman to miss an opportunity for a sale, regardless if it's technically "correct" or not.

Dollars to donuts, much of the info on the web is incorrect anyway, even the VIN decoders. Heck, even the one here incorrectly lists the H-code as a ram air engine.

Don't expect a used car salesman to miss an opportunity for a sale, regardless if it's technically "correct" or not.

Dollars to donuts, much of the info on the web is incorrect anyway, even the VIN decoders. Heck, even the one here incorrectly lists the H-code as a ram air engine.

Moreover, the 4v (Q-codes) didn't get the ram air due to emission regulations.

David, It's all in the nomenclature. The engines did receive engineering  upgrades to make them compliant with the current model year emissions requirements.  Got to remember the 72 Q engine content never changed in 72 which is also when the name of the engine changed. I owned a 12/71 built 72 Q code Gran Torino which had the chrome CJ air cleaner lid and CJ on all the paper work. My 5/72 built 72 Sport had 351 4Bl on the lid and other paper work. (Boss1Ray probably remembers how I almost got removed from the selling dealer because of the 351 4bl lid)!  Same engines, but a game going on with the names. The 65-72 Ford part catalog called the 351 Q a CJ. The 73-79 catalog refereed to the 351 Q as a 351 4bl. There were references to the CJ engine in some 73/ service manuals but the shop tech's knew they were all "Q" engines and treated them as such. The 71-74 engines used the same crank, cam, springs, etc  with the 73-74 engines receiving cylinder head, intake and piston changes to accommodate the new EGR systems.  The manufactures desire to move away from any reference to performance had a lot to do with the CJ name disappearance from air cleaner lids and window stickers and all other printed matter. With gas prices changing almost hourly, economy, not performance was the new word of the day!  The Government, which was always busy trying to protect us from ourselves  and the insurance companies were all watching the Big Three. They wanted to make sure we were offered  cars with the same excitement level of a new toaster but were safe and got better fuel mileage that those ole nasty performance cars we needed to be weaned off!

It is amazing to see all the ads that use the CJ or Cobra Jet in them.

On the insurance thing. I bought a new 1973 Mach 1 Q code 4 speed myself that I still have. I talked to my insurance guy at Allstate before I ordered it and he said it would not matter to him if it was 6 cylinder automatic or V-8 4-V 4 speed the insurance would be the same. He said the points and driving record was what drove the cost up not the model. You just had to be fast enough or better driver to not get caught, lol.

Hmm interesting subject. I always thought "CJ" meant "Cautiously Justified" referring to Ford were trying to make a detuned downgraded V8 sound more appealing to the dumbass buyers as well as eluding to the emissions crap they were being forced to install.

So after reading all the posts on this thread... am I to assume the seller here is just using the "Cobra Jet" term to make the car out to be something it's not??

Since the Marti has it as a CJ it would be correct. Why would they paint an original car. Took away half the value in my opinion. Only original once. for sure.

But just to offer my 2 cents as clarification - the changeover from Ford calling out the 351 Cleveland 4 barrel engine as a Cobra Jet was about Dec of 71 or Jan of 72.  The air breather lid sticker changed at that time as well; hence Secluff's mention of his 72 Torinos. 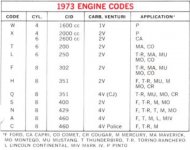 I just had my engine rebuilt so I know for sure it has 4 bolt mains.

Thanks John. I wondered if they kept the Q codes 4-bolt, even though they no longer called them Cobra Jets.