I had always heard over the years (from several different sources) that the initial batch of cars was used for all the driving scenes, including the initial attempt at the 2-wheel 'ski" scene down the alley and that the driver (Buzz Bundy? Bumps Willard?) had no ( or little)troubles doing it on the passeger wheels in the small block car(s).

Some time later, due to the director needing fresh footage of the car leaving the alley that portion of the stunt was set up for reshoots.

The original American stunt team (Joie Chitwood's?) was not available so the only other person that could do the stunt at the time was a french stunt driver, who was brought in for that particular stunt.

He had much trouble trying to replicate the stunt and rolled/damaged some or all of the small block cars attempting to do it.

Apparently he felt that the small blocks did not have the low-end power he needed to perform the stunt so a 429 car was quickly sourced for that one scene. Also, he could only do the stunt on the driver-side wheels...leading to the outrageous blooper we all know about.

So...is that accurate? How close is it to the truth.

Also, I find it odd that no decent amount of raw footage of the stunt has surfaced to date. I have never seen any of the failed attempts at the stunt, although there is plenty of raw footage of many other James Bond stunts available.
Click to expand...

The story as I heard it was that the 302 cars were rolled at the Universal Studios backlot (the alleyway entrance scene), and not on location (the exit) - and I tend to believe that this story is complete fiction.

To begin with, the Ford sales records showed that not a single 302 car fitting the description of the Diamonds are Forever vehicles were sold/transferred to Ford Film &amp; TV during that critical time period when the rest of the cars were purchased.

Secondly, the cars that perform the alleyway exit stunt were both photographed from the bottom - including the deleted stunt performed by the US crew. Both cars have dual exhaust and 351C exhaust manifolds, excluding the possibility that the exit cars are F or H-codes - and I spent a long time examining it to make sure that neither showed evidence of being 429s. They are not; they're M-codes. Additionally, the deleted alleyway exit stunt was done with a car wearing blackwalls, as was the studio stunt; suggesting the stunt was done by one and the same car, meaning that all two-wheeled stunts were done with M-codes.

I'd heard that the 429 car was sourced for the purpose of achieving those power doughnuts on the strip during the police chase, not for the two-wheeled stunt.

The stunt was re-shot due to a large crowd of people obviously watching the stunt from in front of the "Race Book" building. I've been told that the French driver who performed the wrong-wheeled stunt is Remy Julienne, and that he could only do the stunt on the left wheels. I don't buy that.

One of the H-code Machs can be seen doing the jump out of the parking lot. It or it's twin is also seen for a minute in the parking lot chase. Look for the single exhaust car.

Great pics Frank. I wonder where that Boss 351 is today?

Posted this in another thread but thought it needed to be here too.

Sure looks like a Mexican Shelby display or maybe another aftermarket supplier similar to Shelby's 'Autosport' brand. 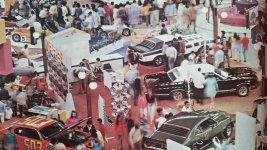 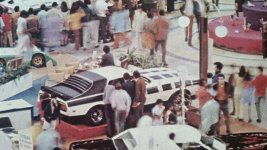 Check out the Motor Wheel 'Spyder" wheels on the hardtop. Louvers :dodgy: , unique striping and spoiler :dodgy: make it look like a Mexican GT-351 model.

Wow! The louvers and blackout on the sail panels look like something other companies like AMC would actually have used on their performance cars.

Here is another video about the manufacturing process.

Video about the assembly line worker back in the early 70's.

GM based but applies to UAW jobs of the time.

Really cool guys, thanks for posting!

Lots of excellent info for our cars archived on this site!!!!!

Many have never seen the rail cars delivering them.

C
Factory hole in side of head