While this isn't a topic specifically about 71-73 Mustangs, it does share some DNA as it revolves around porting my 302 heads

My father and I are resto-modding a '73 Maverick and decided to build a stout 302 to set between the shock towers.  I have two early model 302s in my workshop/garage, and since this Maverick was originally a factory 302 car, and we prefer the early seasoned blocks and beefier cranks, we selected one of those engines.  Both engines I have came with C9TE ('69) model heads, which I thought would be a good head to work because they have the smaller combustion chambers and were in good shape.  Besides, I liked the idea of porting the factory iron heads to find "free" hidden horsepower.

Being that we want a street engine with limited drag strip use, my goals were not to just hog everything out as big as possible, but rather increase flow and keep port velocity. I felt confident that there were areas to improve on, so while we were waiting on other aspects of the build, I took my Dremel, accessories, carbide bits and safety gear and went to work.  Once the porting was complete and I had the springs for the new cam, I sent the heads to the machine shop where they were milled, fitted with bronze guides and screw-in studs, hardened seats, viton seals, and a 3-angle valve job.

Overall I'm pleased with the end results, and while I don't have flowbench numbers, I do feel confident I made improvements.  The pics show the difference between one of my untouched heads and a ported one.  If a conservative estimate is an increase of head flow somewhere between 10-15 cfm, then according to the formula (HP = .25714 x cfm gain x No. of cylinders), I could see a 20-30 horsepower gain.

I spent considerable time on the exhaust ports since, in my opinion, Ford 289/302 cast iron heads leave a lot to be desired and we will use Hooker long tubes and a free flowing exhaust. I worked the port, eliminating the thermactor bump, shaping the guide boss and addressing ridges, flash, etc., then polished to a smooth finish, with the intent to give carbon less to latch on to. The intake port didn't require as much time, but I addressed it as well, paying attention to the roof and pushrod wall, hoping for better flow to the valve. I also gasket matched and spent a lot of time aligning the intake manifold runners to the head intake ports, by using a bore scope and making small changes at a time. The intake port is not polished, since I didn't want to hurt atomization of the fuel from the carb.  All in all, I went slow and easy; and while it wasn't my first time porting, I still enjoyed seeing the results take shape and gaining more experience. 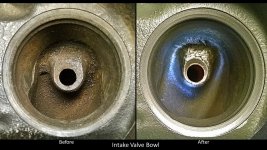 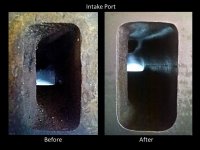 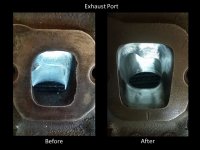 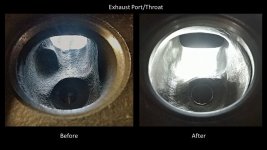 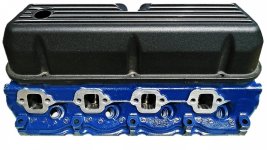 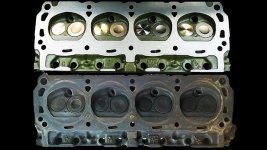 Those look good, I'm sure the time to work them over was well spent. I agree, intake ports need some turbulence on carbureted and throttle body fuel injection engines, to both help with atomization and to keep the atomized fuel from re-combining.

Thanks Don, being that I wasn't under a time constraint meant I could work one port at a time and pay attention to detail and symmetry.

G
351C with high RPM-trop between P and D and a high consuption (other cam?)

Headed to Tampa, Florida for the week. Who's around?