Something they are doing here at work. 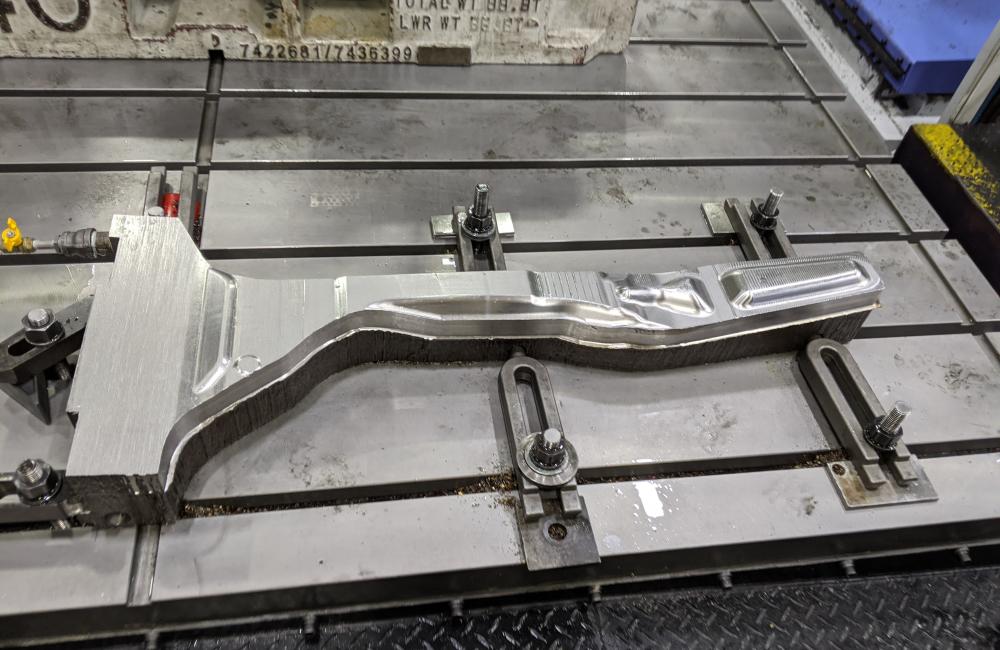 A team of Oak Ridge National Laboratory researchers demonstrated that an additively manufactured hot stamping die – a tool used to create car body components – cooled faster than those produced by conventional manufacturing methods, which could lead to reduced manufacturing costs and production time.

In collaboration with industry partners Lincoln Electric and DTS, they used a gas metal arc welding-based additive technology to print the die for a B-pillar or vertical roof support structure for a sport utility vehicle. The production method allowed for the entire body of the die to be created as one monolithic part.

“With conventional methods, the dies are manufactured by drilling cooling ports in one-foot-long blocks of steel, then assembling, machining the blocks and sealing, and they take 20 days to produce,” ORNL’s Andrzej Nycz said. “We machined and tested the additively manufactured die  in eight days and showed more uniform temperature distribution and 20% improvement in the cooling rate.”

I left a jacket at DTS you had to have a security clearance to go to their shop at the old Oak Ridge facility. There was ATS, ETS and DTS if I remember correct.
The printer technology does not impress me yet. Might in future but not now.

Carolina_Mountain_Mustangs said:
I left a jacket at DTS you had to have a security clearance to go to their shop at the old Oak Ridge facility. There was ATS, ETS and DTS if I remember correct.
The printer technology does not impress me yet. Might in future but not now.
Click to expand...

Not sure where the "old" facility is located as this one was established in the 40's. But would love to hear more history. This is a little history of the plant courtesy Wikipedia.


The city of Oak Ridge was established by the Army Corps of Engineers as part of the Clinton Engineer Works in 1942 on isolated farm land as part of the Manhattan Project.[15] During the war, advanced research for the government was managed at the site by the University of Chicago's Metallurgical Laboratory.[16] In 1943, construction of the "Clinton Laboratories" was completed, later renamed to "Oak Ridge National Laboratory".[15] The site was chosen for the X-10 Graphite Reactor, used to show that plutonium can be created from enriched uranium. Enrico Fermi and his colleagues developed the world's second self-sustaining nuclear reactor after Fermi's previous experiment, the Chicago Pile-1. The X-10 was the first reactor designed for continuous operation.[17] After the end of World War II the demand for weapons-grade plutonium fell and the reactor and the laboratory's 1000 employees were no longer involved in nuclear weapons.[15][18] Instead, it was used for scientific research.[17] In 1946 the first medical isotopes were produced in the X-10 reactor, and by 1950 almost 20,000 samples had been shipped to various hospitals.[17][18] As the demand for military science had fallen dramatically, the future of the lab was uncertain. Management of the lab was contracted by the US government to Monsanto; however, they withdrew in 1947.[18] The University of Chicago re-assumed responsibility, until in December 1947, when Union Carbide and Carbon Co., which already operated two other facilities at Oak Ridge, took control of the laboratory. Alvin Weinberg was named Director of Research, ORNL, and in 1955 Director of the Laboratory.[18][19] 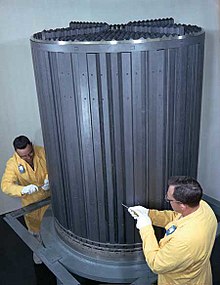 The core of the Molten Salt Reactor Experiment


In 1950 the Oak Ridge School of Reactor Technology was established with two courses in reactor operation and safety; almost 1000 students graduated.[18] Much of the research performed at ORNL in the 1950s was relating to nuclear reactors as a form of energy production, both for propulsion and electricity. More reactors were built in the 1950s than in the rest of the ORNL's history combined.[18]

Another project was the world's first light water reactor. With its principles of neutron moderation and fuel cooling by ordinary water, it is the direct ancestor of most modern nuclear power stations. The US Military funded much of its development, for nuclear-powered submarines and ships of the US Navy.[18]

The US Army contracted portable nuclear reactors in 1953 for heat and electricity generation in remote military bases.[20] The reactors were designed at ORNL, produced by American Locomotive Company and used in Greenland, the Panama Canal Zone and Antarctica.[18] The United States Air Force (USAF) also contributed funding to three reactors, the lab's first computers, and its first particle accelerators.[18] ORNL designed and tested a nuclear-powered aircraft in 1954 as a proof-of-concept for a proposed USAF fleet of long-range bombers, although it never flew.[18][20]

The provision of radionuclides by X-10 for medicine grew steadily in the 1950s with more isotopes available. ORNL was the only Western source of californium-252.[18] ORNL scientists lowered the immune systems of mice and performed the world's first successful bone marrow transplant.[18] 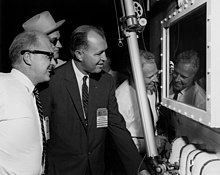 
In the early 1960s there was a large push at ORNL to develop nuclear-powered desalination plants, where deserts met the sea, to provide water. The project, called Water for Peace, was backed by John F. Kennedy and Lyndon B. Johnson, and presented at a 1964 United Nations conference, but increases in the cost of construction and falling public confidence in nuclear power caused the plan to fail.[18][20] The Health Physics Research Reactor built in 1962 was used for radiation exposure experiments leading to more accurate dosage limits and dosimeters, and improved radiation shielding.[18]

In 1964 the Molten-Salt Reactor Experiment began with the construction of the reactor. It was operated from 1966 until 1969 (with six months down time to move from U-235 to U-233 fuel), and proved the viability of molten salt reactors, while also producing fuel for other reactors as a byproduct of its own reaction.[18]

The High Flux Isotope Reactor built in 1965 had the highest neutron flux of any reactor at the time.[18] It improved upon the work of the X-10 reactor, producing more medical isotopes, as well as allowing higher fidelity of materials research.[18]

Researchers in the Biology Division studied the effects of chemicals on mice, including petrol fumes, pesticides, and tobacco.[18]

In the late 1960s, cuts in funding led to the cancellation of plans for another particle accelerator, and the United States Atomic Energy Commission cut the breeder reactor program by two-thirds, leading to a downsizing in staff from 5000 to 3800.[18] 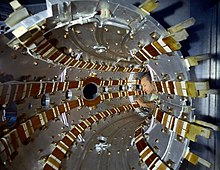 The inside of ORMAK, an early tokamak, was gold plated for reflectivity


In the 1970s, the prospect of fusion power was strongly considered, sparking research at ORNL. A tokamak called ORMAK, made operational in 1971, was the first tokamak to achieve a plasma temperature of 20 million Kelvin.[21] After the success of the fusion experiments, it was enlarged and renamed ORMAK II in 1973; however, the experiments ultimately failed to lead to fusion power plants.[18]

The US Atomic Energy Commission required improved safety standards in the early 1970s for nuclear reactors, so ORNL staff wrote almost 100 requirements covering many factors including fuel transport and earthquake resistance. In 1972 the AEC held a series of public hearings where emergency cooling requirements were highlighted and the safety requirements became more stringent.[18]

ORNL was involved in analysing the damage to the core of the Three Mile Island Nuclear Generating Station after the accident in 1979.[18]

Also in 1972, Peter Mazur, a biologist at ORNL, froze with liquid nitrogen, thawed and implanted mouse embryos in a surrogate mother. The mouse pups were born healthy.[18] The technique is popular in the livestock industry, as it allows the embryos of valuable cattle to be transported easily and a prize cow can have multiple eggs extracted and thus, through in vitro fertilisation, have many more offspring than would naturally be possible.[18]

In 1974 Alvin Weinberg, director of the lab for 19 years, was replaced by Herman Postma, a fusion scientist.[18]

In 1977 construction began for 6 metre (20 foot) superconducting electromagnets, intended to control fusion reactions. The project was an international effort: three electromagnets were produced in the US, one in Japan, one in Switzerland and the final by remaining European states. Experimentation continued into the 1980s.[18]

The 1980s brought more changes to ORNL: a focus on efficiency became paramount.

An accelerated climate simulation chamber was built that applied varying weather conditions to insulation to test its efficacy and durability faster than real time.[18] Materials research into heat resistant ceramics for use in truck and high-tech car engines was performed, building upon the materials research that began in the nuclear reactors of the 1950s.[18] In 1987 the High Temperature Materials Laboratory was established, where ORNL and industry researchers cooperated on ceramic and alloy projects. The materials research budget at ORNL doubled after initial uncertainty regarding Reagan's economic policy of less government expenditure.[18]

In 1981, the Holifield Heavy Ion Research Facility, a 25 MV particle accelerator, was opened at ORNL. At the time, Holifield had the widest range of ion species and was twice as powerful as other accelerators, attracting hundreds of guest researchers each year.[18]

The Department of Energy was concerned with the pollution surrounding ORNL and it began clean-up efforts. Burial trenches and leaking pipes had contaminated the groundwater beneath the lab, and radiation tanks were sitting idle, full of waste. Estimates of the total cost of clean-up were into the hundreds of millions of US dollars.[18]

The five older reactors were subjected to safety reviews in 1987, ordered to be deactivated until the reviews were complete. By 1989 when the High Flux Isotope Reactor was restarted the US supply of certain medical isotopes was depleted.[18]

In 1989 the former executive officer of the American Association for the Advancement of Science, Alvin Trivelpiece, became director of ORNL; he remained in the role until 2000.[18]

In 1992, a whistleblower, Charles Varnadore, filed complaints against ORNL, alleging safety violations and retaliation by his superiors. While an administrative law judge ruled in Varnadore's favor, the Secretary of Labor, Robert Reich, overturned that ruling. However, Varnadore's case saw prime contractor Martin Marietta cited for safety violations, and ultimately led to additional whistleblower protection within DOE.[22]

In January 2019 ORNL announced a major breakthrough in its capacity to automate Pu-238 production which helped push annual production from 50 grams to 400 grams, moving closer to NASA's goal of 1.5 kilograms per year by 2025 in order to sustain its space exploration programs.[23]

They were just trying to find uses for the facilities there recently. Nothing to do with the black box research of the past. DTS is a division of several tool shops out of Grand Rapids Michigan. I did die work with them for years. The old Oak Ridge facility did lots of nuclear research. If you ever go there there are signs at all the streams not to eat the fish. If you shoot a deer you have to have checked for radiation. BTW if you go there I want my jacket back, lol.