Getting the 73 Mach 1 out of the trailer after couple months.

I had never taken the 73 Mach 1 out of the enclosed car trailer since going to the P.I.T.S. show in Tenn. My neck and shoulder do not like changing four tires. I have original Goodyear RWL tires for the shows but have to drive about 200 yards on driveway so need to change to rollers.
So me being the guy that loves mechanical things I already have two player pianos one in home and one in the shop. I was looking around for some new rolls to play and up came this beautiful player piano in Kingsport Tenn. two hours away. It was free to a deserving person. So I got in touch. It was quite a process. The did about an hour interview with me on phone. Lots of questions to see if I knew the pianos which I have worked on some but not a piano tech for sure. It looks to be a very high end model built in England. They did interviews with several people and called and said I had won out. So I needed the enclosed trailer to go get. Not going to risk rain in open trailer.
At the last show the Mach 1 started up and I drove on the trailer and was going to leave there until the Penn. show in June. So I backed into my neighbors paved drive and tried to start but no fire. I I ran starter and got the car out of the trailer. Tried starting fluid and no start. Then battery dead. So I go get the charger and go ahead and put the roller tires on while charging. I go to shop and get timing light and new coil and meter. Everything seems to be in order so I decide to straight wire to bypass the switch, did not fire. While cranking over I saw some sparks at the solenoid and had not tightened the wire going to the starter. Tightened it and varoom. It is in the shop and can go get the new man cave toy.
Player pianos are sort of the precursor to the IBM punch cards. The rolls have holes punched and when the reader sees the hole it puts vacuum to a bellows for that key. Can be sustained by long series of holes. A player piano can play way more intricate music than any person you are not limited to 10 fingers. I just love to watch all the mechanics inside them to make them work and to know they were designed with no computer on paper and mostly built by hand.
QRS still cuts the rolls and was looking today for my Hotel California roll but could not find.
My water pump on the 73 was leaking when I took to the PITS and is still leaking. I cannot change with my shoulder and Dr. cannot see me until June 9. It is crazy how backed up they are. I have also got issue with neck but Dr. says only one thing at a time so they can run the bill up. Sucks they are ass holes. He could do both in one visit but I will sit and hurt another month waiting on another opening.
I might not go to Penn. going to be like $1,300 to rent a diesel to tow with and my F-150 5.4 with now 308,000 miles I do not trust for that trip. I need to go ahead and sell and head to Africa and enjoy life again.
Pics of the new player piano. It was free on Craigslist and Marketplace very week. Some try to sell but only old farts like me enjoy them. There are over 8,000 pieces in there that have to adjust, lube or restore. I love them.
I have a water pump in the box on the shelf but afraid I could not get through the process.
Oh the other great thing about this piano. He is a retired Ford engineer. He is also a licensed Trans Am driving instructor and is going to help me with my track days car. He is moving from Kingsport Tenn. to about 40 miles from me. Was a former 1971 Mustang owner when new. Odd how you meet people on the net today. 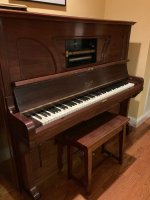 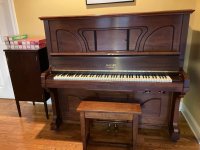 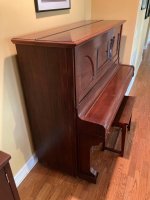 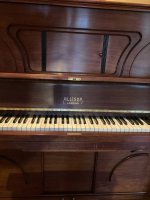 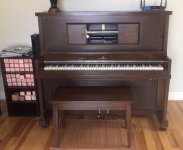 What I thought was bad is the fact Ford paid his college and worked for them his whole working life. His track car is a new  corvette. He said the mustangs engines just will hold together oiling issues.