Greetings all from James, 20 years old. I'd wanted a classic mustang all my life as the love of mustangs and other Fords kind of runs in the family and on my 16th birthday my father gave me the best birthday I'll ever have when he surprised me with a 1973 mach 1 project he'd bought from one of his customers (he used to own an auto repair shop). He worked on it for a while and unfortunately passed away the next year. There wasn't much left to do so I finished putting the engine together but there's still a lot of work left to do and I have a lot to learn, not just about Fords, but about cars in general as I don't have much experience working on them.

As for the car I know very little about its history or how much of it is original. It's a bit odd as you'll notice it has the '71-72 decals, despite being a '73. I guess the last owner liked the older look more but I'm not complaining as it does look pretty nice. A lot of the parts are either very well maintained, refurbished or brand new as there's virtually no rust anywhere, aside from a bit of surface rust on the heads but I'm currently pulling the heads off to clean them and replace the head and intake gaskets.

The engine is a 351c 2V with an Edelbrock performer intake and a Holley 4 bbl.

Transmission is a 3 speed automatic. It also has a new 9 inch rear end.

Also I'm definitely replacing the wheels as they're from a newer mustang and I don't like how they look on older cars. They were put there by the last owner. 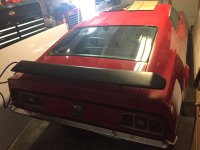 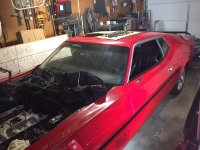 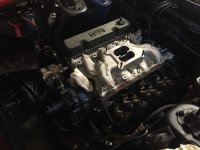 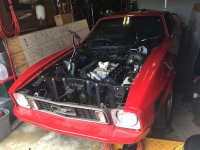 Welcome to forums - that's going to be a nice looker when on the road-  :thumb:

Welcome from NE Tennessee.  Nice project you've got there.  Keep at it - you'll get it done.

Welcome from League City, TX.  Sounds like you have the drive and will to learn.  Good luck and post more pics!

Welcome from southern Ohio.  Sounds like you have a good solid car to work with.  Plenty of friendly people here with a ton of knowledge they are willing to share just for the asking.   What part of Ky you from?

I'm from Catlettsburg but I recently moved to Russell. I actually live just across the bridge from Ironton OH.

Welcome JamestheJameson. You have a good looking car and an excellent starter car. You will be able to learn quite a bit about your car on this website as there are numerous members who have a vast amount of knowledge and experience on our cars. Have fun and best of luck.

Welcome to the group! I bet your dad is happy you honor him with continuing the project!

Good luck with your car.

Welcome from Arizona! That is a one solid looking car. Take your time and ask questions when you need to. There are some very knowledgeable motor heads here on the forum.

I am sorry for your loss! Your father would be proud you follow up the project!

Your car looks like a great foundation for an excellent driver. Make some progress so you can drive it soon.

Are you sure it's a Mach 1? From the looks of it (grille, rear, chrome side mirrors) it could be also a Standard Sportsroof...

We are ready to help you whatever it is around  your car  :thumb:

Timachone, I've looked up the vin number and it is indeed a Mach 1 model despite how weird it looks.

JamestheJameson said:
Timachone, I've looked up the vin number and it is indeed a Mach 1 model despite how weird it looks.
Click to expand...

TBH , whether an "02" body or "05" body - and I've had both ( see my sig) - they the same apart from tiny alterations in options, it matters not really...and I do love engines lovingly wrapped in Edelbrock.

Welcome from West Texas!  It doesn't look weird at all - it's just a '73 with '71-'72 stripes and decals, along with a set of late-model Mustang GT wheels (those are actually the weirdest part).

Good lookin' car - can't wait to see it all come back together and what you have planned for it!

I forgot to mention I do have what I believe to be the original 2bbl intake, valve covers and exhaust manifolds. Also the block, cylinder heads, water pump and oil pan look to be original as well.

It's awesome seeing so many people from other countries here by the way. 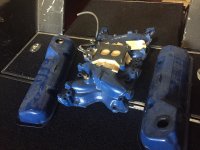 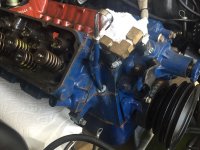 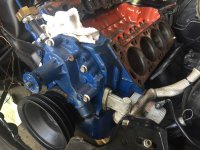 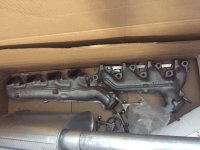 Welcome to the forum. When you put the head gaskets on be sure you put FRONT to front the logos on the gaskets mean nothing. If you put on wrong will have heat issues.
Need to see the door sticker or VIN#. Grill is a sportsroof not Mach 1. Little difference. Mach 1 was an appearance package not performance.