New to the forum but I’ve been lurking for a while.  Since I am about to get serious with my project, I figured I’d introduce myself.

While I am not the original owner, I am pretty close.  I bought the car in 1975 used from the local Ford dealer.  It is a 1973 2V automatic Mach 1.  When I acquired it there was 8000 miles on the clock.  The woman who owned it originally traded it for a Mustang II.  [how I met her is a story for another time].

I was in college at the time in Southern California and this is the car that I learned to work on cars with.  I was a road racing fan at the time and my Mach saw many late night high-speed runs on the Angeles Crest highway back in those years.  During my college days I made a number of “improvements” on the car.  All of this work was done in the parking lot and under an apartment carport.

Hedman headers, Offenhauser Dual plane intake, Holley 650 double pumper, Ram air, 351 Boss valve covers, 1971 4V Ford HO Cam, Rear sway bar, radial tires, Mallory electronic ignition, 1971 rear valence and dual exhaust.  I am sure I am leaving out a number of things, but that is what I remember.  The car ran pretty well and I managed a high 14 second run in the quarter which is saying something given the 2.75 open diff.

In 1977 an idiot riding a bicycle between cars in a parking lot ran into my front fender.  I decided to repaint the whole car since I wanted to remove the white ½ vinyl top that came with the car and put on 1972 stripes.  I also changed out the tail lights to the earlier black surround style. This is also when I added the rear valence.

In about 1980 I moved in next door to a guy with a 1971 Mach 1 4V HO car.  He was going to trade his Mustang in on a BMW so I asked him if I could swap out some parts.  He said no problem and over the next week or so I ended up with his 4V heads (open chamber), carb and intake manifold and he traded in a slightly modified ’71…

Well come the early 80s and life got in the way.  New wife, job, small garage…like many it was time to part with my pride and joy. I had a great dad who when learning that I was going to sell the car offered to buy it from me and store it until I could buy it back someday.  He was sure I’d really like to have my “first love” back at some point in the future.  He like so many others always regretted selling his first car.

As I recall he gave me $3000 for it.  We never did any paperwork so legally I continued to own it.  I guess the transaction is better classified as a fully collateralized loan where there were no payments and he held the collateral.  He stored the car in his airplane hangar and drove it monthly around the airport taxiways (you could get away with that back then) to keep it fresh.

I decided the first order of business was to take the car back closer to stock and removed the headers, installing factory exhaust manifolds and factory dual exhaust.  The ignition went back to points, coil back to yellow top, steering wheel back to original along with a few other things.

She didn’t run nearly as strong anymore, but my days of racing up the Angeles Crest were behind me and I was happy to have my “first car” back.

Well, again life got in the way and my automotive interests changed and the old Mach ended up languishing in storage and un-driven for 25 years which brings us to today.

Now retired I have the time and flexibly to work on the car again.  I’m going to get her back running and do some things I have always wanted to do.  I have no illusions that the car will ever be particularly valuable to anyone other than me and I am not interested in showing or having the car judged.

Thanks for sticking with my lengthy post until the end…

Here are a few photos below.  As you can see, I have already started on the engine work as the strut braces are off and the vacuum booster has been sent to the guys in Portland.  I am definitely looking forward to being involved with this wonderful forum! 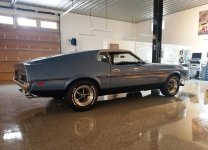 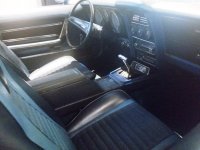 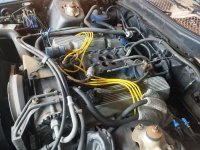 Great story! Clean it up... get it running like you want it and drive! Enjoy.

Congrats on your re-acquisition!.....and Welcome from League City, Texas!

Welcome from PA,  story sounds familiar Enjoy your new old car and I like the plan to restore back the old school parts.

Welcome from Ohio.  Nice story about your car.  Glad things are headed in the right direction for you again.  Keep us posted as you get her back in shape.

Welcome. Whereabouts in north Idaho? I am typing from my cabin ~20 mi NE of Sandpoint.

Welcome to the forum and Boise idaho.

Thanks for the warm welcome guys!

EdM said:
Welcome. Whereabouts in north Idaho? I am typing from my cabin ~20 mi NE of Sandpoint.
Click to expand...

I think we are neighbors!  As the crow flies, we must be very close if you are 20 miles NE of Sandpoint.  I am located off of Rt 2 just east of the Moyie Bridge.

My wife and I were just down in Sandpoint last night having dinner with friends at 41 South.

Love to talk to you about your car as I am planning the MDL T5 conversion and a suspension upgrade, both of which I understand you have accomplished.

Welcome to the forum and thanks for sharing the condensed version of your story. Not too many can say they've owned their Mustangs since 1975. I'm sure there's more than a few here who weren't even born in 1975. My own 1971 Mach 1 was parked and off the road from 1975 to 2019.

Hello and Welcome from Michigan. Great story and great car!

Hello and welcome from MO.  That is a very nice looking car.  It appears that it is in great shape!

Welcome, also from north Idaho, but a little south of you.