You all have helped out with a previous problem and need more help.

In December my 73 Vert with a 351c suddenly stopped running while driving it. When I tried to start it on the side of the road it just would not turn over (had electrical power). After help on here it was in fact the pin in the distributor that snapped. We place a new one in. Tried to start her and it almost caught, but would not turn over. We looked and and the pin snapped again. After looking in past threads it looked like the oil pump.

When my friend and I went to replace the oil pump (not easy to get to!) found a lot of metal shavings in the oil pan, which we know is not a good sign. A few of the smallest ones where magnetic but there were a few larger ones, about the size of a thumbnail, that were not magnetic and appear to be aluminum and very malleable. I have no idea how long they had been in there.

I bought the car about a year ago and don't much of its history except that a 351c was dropped in it at some point, probably in the 90s from what we could tell on some old parts.

So, what should we expect, be looking for.... any advice would be great. We just don't want to put it back together to find out we have a problem to deal with still. I am sure I forgot to add something so will be happy to give more info!

Given your description I'm afraid your only course of action is to pull the engine and tear it down. IMO something has catastrophically failed and you need to find out what it is. Sounds like a piston to me.

+1, pull it and tear it down. Hopefully you'll be able to salvage the block. On mine there was a corner missing off one of the distributor drive gear teeth on the camshaft (not the cause, but a result). Tore it down, needed new block. Metal gets thrown/splashed around inside the block, it doesn't just travel through the oil passages.

I had this happen on a 460 engine once.  It turned out the valve seals had crumbled and locked up the oil pump.  The seals were some type of cheap rubber-like material that hardened and then cracked.  If the engine still turns over you may get lucky but you will still need to pull the engine and take some parts off.  Those little bits of broken seal were everywhere.

Thanks everyone. I appreciate your time. We assumed it was serious and this was what the course of action would be. Was just making sure and hoped for a 'Hail Mary'.

Good luck. Hope it is something minor that doesn't break the pocket book.  Also, if you could post a few pictures of the metal shavings you have found now  and what you do find out it could help someone else if they experiences the same thing.

Here are some photos of the shaving and a big chunk. Very shiny new looking. The largest one is about size of my thumb nail 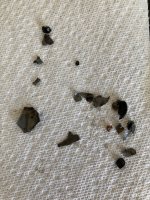 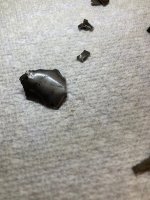 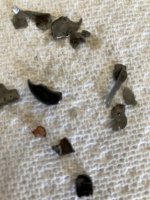 That looks like Babbitt bearing material to me.  When you tear it down I am curious what you will find.

Ouch!! Is that one piece a chunk of ring??

It looks like a piece of an oil ring scraper rail. That's ugly... I hope for the best on this one.

My mechanic thinks it is a piston.

goodnigh said:
My mechanic thinks it is a piston.

Bentworker said:
That looks like Babbitt bearing material to me.  When you tear it down I am curious what you will find.
Click to expand...

+1. Babbitt is nonmagnetic and dull, aluminum should be shiny.

Dead in a parking lot

Dead mustang, will not turn over.

B
Some fuddlement fixed, onto the next two, start position not working, right turn signal not working