While by passing the resistance wire on my tach, I decided to dig further behind the dash to look at the electrical.  I found several electrical connectors not attached to anything.

I downloaded the colorized wiring diagrams and attempted to trace out the circuits. i believe I have identified a couple. I would like confirmation on the identified ones, as well as knowing what the others should be attached to.

Photo #1  Located behind glove box. Purple/white hash. Terminated in center of 3 pin connector. Left and right ports on connector are empty.  I think this is the seat belt warning lamp to warning lamp switch. I don't know where this connector terminates

Photo #2 Located behind glove box. Two black/blue stripe wires terminating in two pin connector. I think this goes to an under dash courtesy light on the right side of car. The light is no longer there. There is not another connector like this on the left side of car.

Photo #4 Located behind glove box. White connector with Red/Orange hash marks and light green wire. I don't know what this is for or where it terminates. 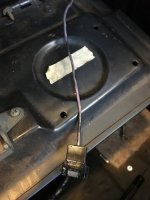 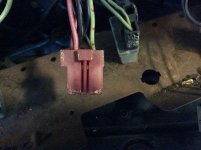 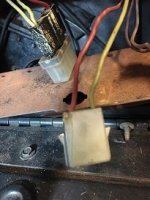 Nothing, zero, zip, nada? No ideas as to what these connectors are for?

I have located three more electrical connectors that I can not locate on wiring diagrams. Could you tell me there purpose, and what each wires purpose is.

Photo #3 is located on the left hand side of the steering column. The wires leaving the red connector are in the harness that goes to the engine compartment.

Photo #4 I think this may be the feed to the old radio. The blue and yellow wires on the bottom half of the connector have been cut.

Photo #5  will be included in next reply. I have exceeded the allowable photo size. 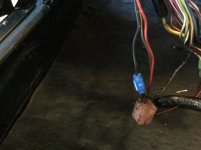 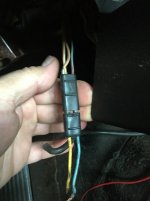 Red plug is for emissions of some sort.  I've never seen it's mate, so it is unimportant.

Yellow/black and blue/red wires are the radio feed plug.  Opposite of the yellow/black wires should be white/purple.