How did you choose the non original Ford color to paint your 71-73 Mustang?

I've painted a few projects over the years and my best 2 cents would be to avoid 'trendy' colors of the moment. I painted an El Camino in 2008 in a copper color that was hot on new cars at the time - now you never really see it anymore. Think of the teal and orange sherbet color street rods from the 90's that show up at the TV auctions - they look very dated. I'm seeing a lot of new cars and trucks in non-metallic 'battleship' gray lately - I have a feeling that color will age poorly.

I drove around to car dealers and looked at the vehicles until I found a couple colors/shades that I liked, then went back a few times at different lighting until I found the one I wanted.

For me changing my 2B red 73 vert to another factory color, gold glow was an easy choice. I always want a gold glow vert. What was hard for me was deciding to keep my other 73 vert it's original 5M medium copper metallic color. I was not fond of the color and the car color was already changed to black by a previous owner. In the end I stayed with the original color and hoped i would like it. I am glad I did.

My 73 was yellow from the factory , but when we bought it (1983) it had already been changed to white with a black top. I changed to red but was never happy with the shade of red.

The car was stolen and we found it a few years later in a police compound. It had suffered some damage and went off to a few people, the color I wanted was bayside Blue (Skyline GTR) color.

My E30 was at the panel beater and he ordered the wrong color , I wanted Ferrari Nero (Black) and he ordered Ferrari Verde , color codes 910 and 610 , we decided instead of wasting the paint to use the paint on the Stang. Its a stuning pearl green with sparkle, in the shade its a dark green similar to the "bulllit' color and in the light the curves show up with the pearl.

I have to chime-in. My idiot, moron and dishonest thief of a body guy painted my car the wrong color and I kept asking to see the paint code and he kept lying and said it was correct when it obviously not. Turns out it is a 1970 Lincoln color and most people don’t realize it’s not the correct Mach 1 dark green metallic. So beware of incompetent painters and make them do paint color panels.

in the final project the car had to be repainted due to thin base and sealer layers that you could almost scratch thru to the base metal. I opted for ease of the repaint to keep that Lincoln color. 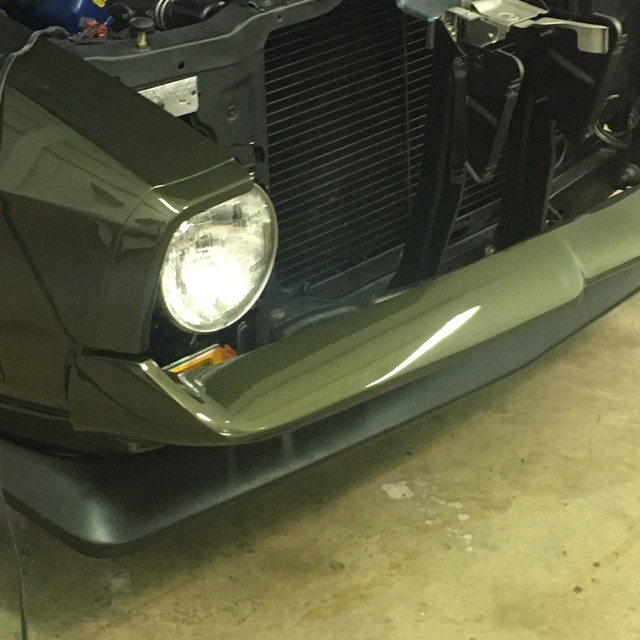 I let my Wife choose. I had plans for the rest of my life. LOL. Seriously, we chose from a color sheet and then had a small panel painted so we could really tell what we were getting into. It doesn't even have a name but is Martin Senour 59346. A wild red that changes tones in the sun. We didn't know it would do that but we like it. I've posted pics before but having trouble now. Ed Raver 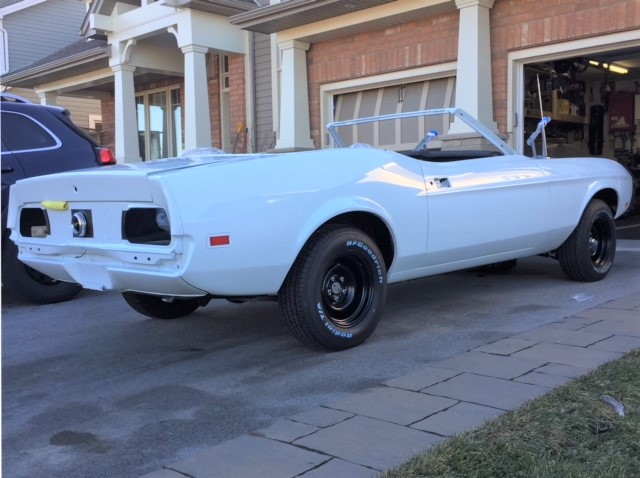 As a purist  when it comes to rare car's, I had no problem repainting this car it's original Pastel Blue. Definitely not the most exciting colour out there. Most people initially think it is white. All depends on the light reflection. What was difficult for me in the paint selection was my actual painter.... He did not like the colour and wanted me to go with something else. I told home for the many $1,000's of $$$ I am paying you, please do the colour I ask for. He did. Now,i if I was going to build a nice driver from scratch, I would do one in a nice "grabber" colour. They always look nice...

Picking a custom colour is hard and about personal taste. Much harder than picking a color that was offered.

It goes also further than that, depending on your goal. Its also picking greys for parts, interior details that marries with the custom colour etc..

I know I've spent lots of hours for this and bought samples to make tests. Went to my painter and came back home with like hundred of samples.

Some of the grey's i've picked for instance are inspired of the original ones, but then married to match the future car colours, ending up with more warm greys.

Same for the engine, as I can't suffer the idea of a ford blue engine near my carefully picked greens and greys, I've picked a Ford engine grey for it.

Yet, no matter how much time I've spent on this, it's only when all will be back together that I'll see if all is as expected.

The hard part is projecting the colour in your head and see the car with it. In that regard, the advise to look around and pick a car at dealership is a good one.

Tho as most people pick a colour like the one their neighbours picked, its not always helping.

In my 71 case, I want for it something near of original, but I find the original ivy green too flat and not giving enough guts to the body line. Something paints could not do at the time. My painter has like 20 grades of particles. giving more or less contrast and sprayed tests to pick the right one for my feeling.

Unless you try to match an original colour, I believe there are no wrong colours if all is nicely matched.

The darker ones and metallic, will not accept easy a bodywork that hasn't been sanded/prep for quite a few hours. They also imply more complicated repairs and often even the smallest dent means redo an entire panel, while non metallic would need only a good polishing session on the resprayed region.

it's really up to u... but with that said i would choose a color that a car/truck/van.. whatever... is painted now.. u need the paint code for future needs.. doing custom is throwing the dice... u will need the manufacturer of the base as well as the tints and how much...u NEED to cover your bases if at any time something happens and u need to paint a fender or so... just think years down the road if something happens or u sell..

I'd originally fallen in love with a Grabber Yellow/Ginger interior Mach 1 302 car when I was 14.

I also had absolutely no idea what color mine was when I bought it (sunburned "something"), and got the bug again when I saw a Grabber Lime '71 featured car in a 2010 issue of Mustang Monthly (which made me think of the Grabber Yellow one immediately).  So, I bought it and kind of forgot about worrying about what color I was going to go with, until I decoded the paint code on the door sticker, and saw some nicely restored/restomodded Light Pewter examples.  I'd always been a fan of gray scale and metallic silver colored cars, so I was leaning that direction... but then I hit the point of pulling up the carpet and saw the unmolested Light Pewter on the transmission hump - it was a done deal at that point.  In fact, a lot of original styling was considered when I was putting it all back together.  Aside from the wheels, louvers, missing lower bright trim, and chrome front bumper, my car is pretty much 'cosmetically' how it came from the factory (and I made that decision after seeing so many cars with every 'cool' option thrown at them - not enough "no stripes, no spoilers, no magnums" cars out there).

As much as I love the color of my Ram and wife's Camaro (Metallic/Pearl Cherry Red, basically) I don't know if I would go with that color on mine.  In fact, I honestly can't see me having my car in any other color than the Light Pewter it came with.

Now, a 'vert, on the other hand... that Metallic/Pearl Cherry Red would look freaken awesome.  (some body styles just don't lend themselves well to certain colors and styling options - just my personal feelings).

B
Original vs Modified
2

AUSTIN VERT ADDS A TOUCH OF BLING TO THE FRONT LIGHTS.