I need the Truth about Suspension please!

Ok all. I have read the 17 pages of suspension question and answers. Parts, bushings, shocks and poly vs rubber. Air vs gas shocks.

My goal is to end up with a sweet rider. Slight rake look only. And have her handle in a nice calm way. I will not be taking her on the track or street racing her.

Right now she has Helper shocks on the rear and every bushing on her is shot.

Plan: Go all rubber bushings. Any clue where to find them?

I can find poly all over the place. But not a rubber master set.

The metal Idler arms, pitman, sway bar, strut rods and springs all are in good condition.

Wanted feed back on the rear helper shocks? Anyone have them?

I do need to watch the $$. I am on a fixed income. But I do want her riding nice. All words of wisdom would be a big help. Thanks. 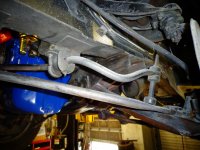 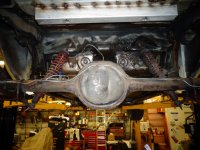 OK, I would first like to dispel a widely held opinion that "helper" shocks, air shocks and the like are the way to "jack up" a car. This is incorrect.

The shocks primary function is to control the rebound effect that the springs allow the car to experience. They work in tandem with one another and do opposite functions.

The bulk of the cars weight in the rear is designed to rest on the spring perches, not the shock mounts. Jacking up the rear of your car with shocks forces the shocks to do two very disparate and contradictory things: Support the weight of the vehicle and allow some rebound, while at the same time try to control the rebound oscillations.

You always end up with a very harsh ride and a rear end that crashes over speed bumps and such. And terrible, even unsafe handling.

The 71-73 Mustangs came from the factory with the rear end sitting slightly lower than the front, more pronouncd on the sportsroofs than the coupes, but pretty noticeable on the convertibles too. This was done to aid the car's handling, and it worked.

Unfortunately, it also gave the car a kind of wierd, anemic and "worn out rear springs" look that most don't think looks appealing.

Many have jacked up thier Mustangs to get the look thay want. Over the years many, many have done it the simple way and just installed some air shocks and pumped 'em up to thier best-looking ride height.

This creates a horrible suspension compromise and terrible ride and handling.

Others have put "hi rise' spring shackles on the mounts, which works and doesn't compromise handling as much, but the shackles are quite visible and though they looked "all the rage" in the 70's, today most people find them just too cheap and ugly to put on. I agree, they look like crap!

The correct way is to change the springs.

If your front coil springs are stock and in good shape, getting new rear springs that are 1 1/2" to 2" higher than stock will give you a slight rake, assuming you have the same size tires all around.

If you don't have a rear anti-sway bar already, get one and install it. It is quite simple, and it will improve your handling dramatically. They are usually less than $100 and easy to install with simple hand tools.

I have poly-graphite bushings in my car and thay are far better than rubber, and I think better than styraight polyuerathane bushings too.

The poly-Graphites are a rubber/ poly-G blend. Black like rubber, does not squeak like polyeuratheane , almost as compliant as rubber, and lasts forever. I like em.

If you replace your rear springs, you should replace the fronts too.

I have been buying custom-made springs for years from Eaton/ Detroit Springs, and those guys are awesome! They will talk you through the order process and figure out exactly what you need. Thier springs are not typically any more expensive than simple aftrmarket replacement springs you would get from any vendor.

A note about "re-arching" your exsiting leaf springs: I wouldn't do it. I have had it done a few times on different cars years ago, and they never seem to last. They start sagging within a year. Just pony up the dough for new ones, you'll be much happier.

Any links to these Poly-Graphite Bushings for our cars? I would like to read/check them out a bit more.

There are a lot of places to buy Mustang suspension bits and pieces. Any time you can re-use your Ford metal and just install a bushing, you will be better off. I have heard, but no bought personally, that most new replacement parts like control arms are made using thinner metal, and so fail sooner. I have heard good things about these guys.

These guys are known for resto-mod stuff, http://www.mustangsplus.com/xcart/home.php

Probably the best strut rod rubber bushing to use-


Here is a weblink to

Thanks for the links. The car came with the rear end helper shocks. To be truthful, I was not sure what type they were. :huh: LOL. Kids can be helpful at times. I do not see any signs of any rear springs, so it must have been the last owner that did the helper shocks. I am trying to put her back to as original as I can. That's why I am asking for help. According to the books, it looks like 429s came with rear sway bars and springs. I could be wrong. Guess I need to get my numbers run. It's a start.

Sure..Post up the VIN and data plate info, and these guys can tell you exactly what the car was supposed to have, and where to get replacement parts...

First of all, ALL of them have springs: one at each wheel. The fronts are coil springs, the rear are flat "leaf" springs.

For 71-73 Mustangs, only the 4-V ( 4-barrel carburetor) cars came with rear sway bars and staggered shocks. Staggered shocks are where one shock is mounted in front of the axle, and the other is mounted behind the axle.

This to try and counteract the tendancy of leaf-spring car's tendancy to exhibit "axle tramp", where the leaf springs allow the axle to "wind up" under hard acceleration, and then violently spring back as the leaf spring reaches it's limit and forces the axle to "unwind".

This can happen many times a second on hard take-offs with good traction, and can csuse one or both rear wheels to violently hop up and down...hence the term "axle tramp". This is very bad for the rear suspension.

Staggered shock only came in manual transmission cars, there wasn't I difference in 2v vs 4v Cleveland. This is just what I information I have. If this is wrong please correct it.

Staggered shocks came on most 4v cars, manual or auto.

Mine has staggered shocks and is an automatic.

Nope, staggered shocks and rear sway bars came on all 4-v cars, automatics as well as 4-speeds.( as part of an included package, or as a mandatory option, depending on which model of Mustang it was.)

Sadly, the "competition suspension" on 2-v Mach1s didn't include much: "revised" springs and shocks, and a slightly thicker front sway bar. No stsggered shocks or resr sway bar, though. Doesn't sound very "competitive" to me!

Only 4 V cars could be had with 4 speeds

All 4 v cars had staggard shocks

Comp suspension was a option and a required / automatic upgrade on some combinations. [ depending on the year - rules changed ]

It could be ordered on [ depending on the year - rules changed ]

It might have been required on the 429's - not positive though.

Thanks for a correction of information for me! Learning new stuff everyday!

"Competition Suspension" was included on all Mach 1s, but the actual content of the package changed according to what engine was in the car:

Mach 1s with 302s and 351 2Vs came with a "Competiton Suspension" that included revised springs and shocks, a little bigger front sway bar, and a variable-ratio steering box. No staggered shocks or rear sway bar though.

351 4Vs and all 429s came with the same as above, but added the staggered shock feature and a rear sway bar to the package.

Each engine,trans and a/c or no a/c combo had its own computer-picked set of springs (many different spring rates for these cars), shocks and bars.

There may have been only two or three sway bars and shocks for all combinations, but there were probably 15-20 different variations of springs for each combo.

Most vendors offer replacement springs in 2 or 3 choices. Eaton/ Detroit has the computer lists and makes each spring as it was avaialable when factory made.

I highly recommend Eaton as your spring choice.

"Competition Suspension" was included on all Mach 1s, but the actual content of the package changed according to what engine was in the car:

Mach 1s with 302s and 351 2Vs came with a "Competiton Suspension" that included revised springs and shocks, a little bigger front sway bar, and a variable-ratio steering box. No staggered shocks or rear sway bar though.

351 4Vs and all 429s came with the same as above, but added the staggered shock feature and a rear sway bar to the package.

Each engine,trans and a/c or no a/c combo had its own computer-picked set of springs (many different spring rates for these cars), shocks and bars.

There may have been only two or three sway bars and shocks for all combinations, but there were probably 15-20 different variations of springs for each combo.

Most vendors offer replacement springs in 2 or 3 choices. Eaton/ Detroit has the computer lists and makes each spring as it was avaialable when factory made.

I highly recommend Eaton as your spring choice.
Click to expand...

I disagree on the rear bar

What exactly do you disagree with? It is definite that only 4-V cars got the rear sway and the the staggered shocks.

Back to the original question... Before disassembling the suspension remove the rear shocks and helper springs and see how the car sits. Then decide if you want the front lower or the rear higher, this will determine how to proceed with springs. If you want the rear higher you can replace the springs, they should come with new bushings. Get a rear shackle bushing kit with the new springs, the original shackles should be fine. If you want the front lower, that can be accomplished by either replacing or cutting (my preferred method) the front springs. Rebuild the front suspension using good quality OEM replacement parts (rubber bushings). Moog probably makes the best replacement suspension parts. Your ride is way more dependent on shocks than any other component. If you splurge do it on shocks. The KYB gasAjust shocks provide a nice firm ride and I have not found them to be harsh at all. To save money rebuild your original control arms. If you'd like better handling upgrade the sway bars. I have 1-1/8" front and 3/4" rear, the car steers very flat, but the big bars affect the ride over uneven pavement. Maybe a 1" front and 5/8" rear would be a better choice for a more mild combination.

A little info on the side: when you wanted the 15 inch Magnum 500, you had to order competition suspension at the same time.

New Spring advice front and rear, Height of fenders, Passenger side rear is lower by 5/8" now....or maybe a bit lower.
2