Kamm Tail aerodynamics and our Mustangs

Some of you may have already known this, but this weekend I was watching a documentary about Shelby and learned about the Kamm tail when discussing the design of the Shelby Daytona. In the documentary, Peter Brock, who designed the shell/aerodynamics of the Daytona, explained that the idea of the tail end design was based on the Kamm tail studies from Germany (https://journal.classiccars.com/2017/09/28/the-shelby-daytona-coupe-peter-brocks-kamm-tailed-legacy/). The Kamm-tail is based on the ideal "tear drop" shape for a car but with a chopped back tail (see diagrams below) 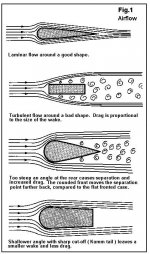 Here is a list of cars that carried such design: https://en.wikipedia.org/wiki/Kammback#cite_note-popular_mechanics-11

The list obviously includes the Mustang Fastback design among many other famous designs such as the Daytona and GT-40. In this collage picture I made you can really see the resemblance of the back end of these three designs with similar tail angles, chopped tail and such. 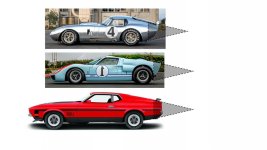 Notice that both the Daytona and GT-40 have a solid spoiler that breaks the profile of the tail compared to the Mustang which follows the line of the tail. They had to add this aggressive spoiler to the former two to increase the downforce needed to travel at such high speeds. Even though it slowed the car down, it made them safer and drivable at high speeds. Our Mustangs are not designed to go at such high speeds, or at least not in the "streets," so that much downforce is not needed. I have read a lot of debate about the angle of the spoiler. The original design for the Mustang was for it to follow the line of the tail, even though a lot of people install it at a steeper angle. The steeper angle may increase down force but reduces the aerodynamic effect of the Kamm tail. Interestingly I found a SAE paper that did some simulations about the spoiler angle. Granted that in their case it was a "solid" spoiler rather than a "wing" spoiler, but you get the idea (https://www.academia.edu/6142362/Aerodynamic_Design_of_Super_Efficient_Vehicle). Here is an excerpt of that paper showing the results of spoiler angle. In essence, when the spoiler follows the line of the tail it increases the drag coefficient by very little, or 1.36%. However, as the angle becomes steeper, the increase is much more aggressive, or 19%+. In the table below, Cd is the drag coefficient and Cl is the downforce coefficient. Obviously the downforce increases as the angle increases. The angle referred to in the table is with respect to the tail line or tangent. 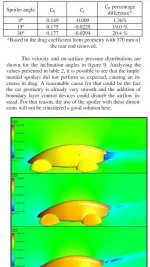 Very good info, thanks for sharing it. I'll just leave mine inline with the trunk as it "looks" better that way and at least, it's the right way around.

Great Info! I have mine set level. I was told if you can sit your beer on it and it doesn't slide off, it's correct. I'm going with that. ;-)

B
Some excerpts from a book about our cars