You knew it was gonna happen sooner or later, didn't you?

Surprisingly enough it's not for indecent exposure or for being the best looking 40something going on 50 or even about my attempt to take over world leadership but it's in fact about my car.

(You take what you get, it's another step towards world leadership!)  :whistling:

I got my car featured in one of the two big German US car themed magazines!!

It had been in "Street" magazine a few years ago, still sitting higher and with 15 inch Torq Thrust wheels, but this time it even made the cover (which I'm very proud of!)

The cool thing about this is that when we were kids, we used to read "Chrom &amp; Flammen" (meaning "chrome &amp; flames" but that was easy wasn't it?) and drool over the cars they featured. At the time it was the only such publication on the local market.

Their headline touches the subject of how the color combo of the Nash Bridges 'cuda inspired me to go with yellow after the rebuilt.

I especially like the second part under the headline "Gelb, tief, cool" which means "Yellow, Low, Cool". I think that pretty nicely sums up what I wanted to achieve with this car. 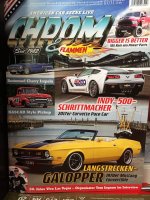 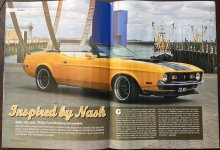 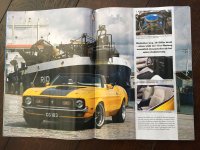 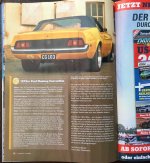 That is awesome! Congratulations 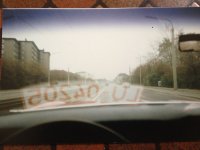 Very cool! Great keepsake! I'm surprised you didn't get your better half in the photo shoot.

That is very cool indeed! Chuck

That's awesome and the car pics turned out great!

Way to go Lux! Your car is lookin awesome and congratz on making the front cover.

That's Awesome Mike! Congrats. Did you take the pics? The back drop is perfect.

Yeah, I took all the pics. I was in touch with them and we'd been trying to arrange a shooting for ages so I simply sent them these and asked if they were good enough. They asked why I hadn't sent those before we started planning.

I'm glad they were up to par for the magazine.

Well done mate! I used to read that until recently when they killed the Dutch version. But I'll make an exception and get this one I think!

Very cool! Great keepsake! I'm surprised you didn't get your better half in the photo shoot.
Click to expand...

I was so excited to see the cover that I completely missed that!!!

I'm glad they liked your pictures - you (collective 'you,' talking to everybody) have the best eye for capturing the 'right' images of your own vehicle.  Having a quality camera and good composition is all anybody really needs these day.  The thing I don't like about having someone else take and choose the pictures, is they usually tend to take some artistic liberty and start editing things (choose an unflattering angle, make the yellow brighter, or wash out some background details, etc.).

You've got a great eye, picked incredible backgrounds, and took quality pics of your awesome ride that they actually used - can't do any better than that!  ::thumb::

that is defiantly  one off the bucket list  :udaman:

Yup! Kate Upton is still on it though!

B
Anyone autocross or race their 71-73 in SCCA type events?