I was looking on eBay and they have Monroe spring adjust rear shocks for sagging rear end which I have. My old shocks are leaking air shocks.

The seller states that shocks will raise ride height in rear.

Anyone have experience with this product?

Thanks Rodney from S W Florida

if the rear end is sagging you might need springs first

New or recurve rear springs and get rid of the air shocks. They are hard on the upper shock mounts.

What they said. Using shocks as a band aid to restore ride height is a compromise. Bite the bullet and replace/ rearch the springs if needed and get some good shock absorbers...

Ok thanks for your feedback.

I will have my springs rearched

to rearch 45 year old springs might be a temp. fix at best

You might look into a set of the 5-leaf packs - the stock spring packs (non-performance) were 4-leaf packs, and prone to sagging over the years.

You might look into a set of the 5-leaf packs - the stock spring packs (non-performance) were 4-leaf packs, and prone to sagging over the years.
Click to expand...

i have 5 leaf on a vert i think they are much to ferm i would op for 4.5 if i could do it again ---- standered eye 5 leaf set ther rear end way to high just my thoughts

Keep the air shocks and get ready for this... 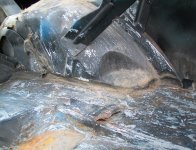 The holes were smashed open big enough for the heads of the new shocks to fit through. On QCode351Mach1's (Scott's) advice, I sectioned in a shock cross member from a '69-'70 to repair the damaged mounting points.

Here's the damaged sections cut out, the new pieces are on top (looking up through the where the trunk pan would normally be): 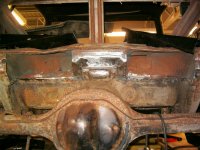 New pieces welded in - they are easily 2-3 times thicker metal than the factory cross member material. 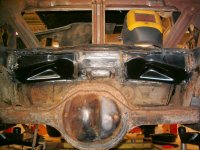 All buttoned up - just before I pulled the rear axle for a rebuild. 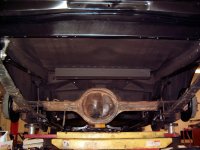 I have mentioned this in several previous posts about the rear sitting low.

The day I picked up my 73 Mach 1 it sat low in the rear... After a month or so I put the helper springs around the rear shocks. Now I grant you the car never got but 12,000 miles on it with no damage or issues with shock mounts.

Two of the verts I have have air shocks from PO one has staggered shocks &amp; sway bar from factory the other does not and I see no damage to either of them.

Now if someone in the past tried to pull a big trailer then I could see how it would damage the mounts but I don't see how it could just driving down the road.

Your rear leaf springs do not really wear out or loose tension. They simple loose part of their arch as some have said. You should have a shop in your area that does leaf springs. Most can even make them up for you putting the eyes on the main leaf also. I would re-arch the springs and go from there.

In days gone by we use to cut the eyes off the main leafs and put them on as an extra spring and add clamps on either end. Stiffens it up for sure and stops any wheel hop issues without traction bars.

The spring subject is almost as bad as the cam subject, lol.

The big difference: your cars were most likely driven and cared for responsibly.

Mine, was driven hard for 74K miles over 9 years before it was parked (last registered in 1980, anyway) - most likely with a seized engine. Somewhere along those years and miles, mine saw air time - I know because the front and engine cross members were bent upward, as well as the oil pan and even the oil pump pick-up was dented! I had a chain holding my gas tank in, for Pete sake! I'd wager the majority of these cars suffered through all sorts of abusive driving, thanks to the car chase movies and TV shows of the time and all their fan-boys trying to have their fun as well.

With the air shocks "pumped up," the ride would've been stiffer in addition to having the 'ass-end in the air.' When the suspension needed to flex, and the air shocks wouldn't allow it, so the shock mounts would suffer the consequences - since mine had 3/8" lower shock mounting points on the Lakewood traction bars, the upper shock mounting points (rear shock cross member shown above) took the brunt. The vibrations also most likely spun the bolts loose, allowing them to bounce around in there to wallow out the upper mounting points. If that wasn't bad enough, the previous owners torch-cut (real precision work) some adapter plates to sandwich the wallowed-out upper mounting points so the air shocks had 'something' to mount to. The rear shock cross member is literally 1-2mm thick stamped sheet metal... and quite flimsy, all things considered. :shootself:

Not sure what you meant by your last comment. You've been fortunate to have had good luck with air shocks... but it doesn't really measure up when compared to all the countless stories of people having bad experiences with them - I know you're only one success story out of at least 30 people I've heard who've had issues with them.

New Spring advice front and rear, Height of fenders, Passenger side rear is lower by 5/8" now....or maybe a bit lower.
2

Front Coil Springs - too short for me