I got a Monte Carlo bar for my Mach and having trouble figuring out how to mount it. I got a used one from Don at oms. has anyone installed one on their Stang. I tried googeling it no luck. Need to strengthen the fenders up before race season.

the ones i seen installed on other years, they mount infront of the shock towers!

They do mount in front of the shock towers, right above the distributor.

You may run into clearance problems because of the distributor.

At least, that's what happened with mine.

When I had the original 302 in the car, the monte carlo bar would have to be pressed tightly in between the cables on the distributor cap so there was no way I could pull them off the cap with the bar in place. Taking the distributor cap off was completely out of question without removing the m c bar.

Now with the 351 and the Duraspark distributor it is simply impossible to even get the bar into the car.

So I never put it in, though I'd love to use it.

Did anybody else have those problems? As far as I know, there is only the straight one available for our Mustangs or has anybody seen another type of bar?

I had to remove the air cleaner snout to make it work on mine. It is close for some of the distributor wires, but there is clearance. With Pertronix installed in place of the dual points, I have no reason to remove the cap. 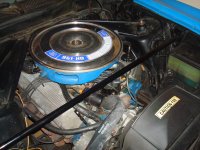 Same as above on mine no problems with it.

kind of pricey but it includes with much thinner shock supports to firewall. however this could be beneficial to people because alot of us have to remove them to work on the motor around that area.

here is a picture of the top view of them installed

Thank you to all who responded. 72 thanks for the pic. That is the mc bar that I have. I thought that was where it went but wasn't sure.

I don't know what I would do without the people on this site. There is always help a click away.

Back to the drawing board now. Battrey to be mounted in trunk and move MSD box to make room for mc bar. Will post pics after installation.