Welcome from San Diego. Congrats on your new ride.

Welcome from Germany! Very nice optioned Vert you have  :thumb:

Please make separate threads for you problems, there we guys see them faster and could help out  :wrench:

Welcome from MO. Nicely optioned car!  Gratz on acquiring it.

Welcome to the Forum from North Carolina.
I also have a 1972 Q vert Gold Glow. It is on rotisserie right now should have been painted several months back but my human body did not allow. Great color for sure.

So is Moose Gold Glow? I know it is not the original color, but I have no information regarding the repaint.

Welcome from west Michigan and another convertible guy!

I see you were asking questions on what was different from Marti.
The paint code is for Medium Brown Metallic or was called that in 1973. 72 might have been different name. The Mach 1 in this picture is mine and is that color.
If the radio is AM/FM and 8 track would have came from a Lincoln or T-Bird never in a Mustang. Only AM / 8 Track in Mustang.
The lock button in the window control just turns off the other three window switches. It does not lock the doors. Cougar had Power Door Locks and the Power Window harness has the connector for them but was not offered. Could have been a special order for Trim or Paint but would be a six digit DSO code and would show up on the build sheet.
All 1971 - 1973 verts had glass rear window.
Your car originally had the little narrow bump strips down the side which have been removed and stripe added. To get the stripe on convertible you had to get the Decor Group which blacked out the bottom side of the car and got you a Mach 1 grill.
The hood black is incorrect should be flat and different size. You did get the NASA hood with the Q code engine in 1972 but if the hood was black it would also have hood locks they came as one option.
The door panels are repo for sure. For some reason they just cannot get them to look right they are all splotchy. I found an insurance crash that had perfect ginger interior for my car. The hood locks were out to do a rub off for a member to do his hood by. Current templates are incorrect.
With the Magnum 500 wheels you should also have a BFG space saver spare like the one in the pic.
People do make changes in them to fit their taste.
The 72 Q vert I have is a C-6 and pretty loaded as well. No AC and I am removing the protection package and adding stripe. Also Power windows going in.
So some answers to some questions there will be many more I have new ones each day. 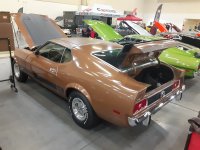 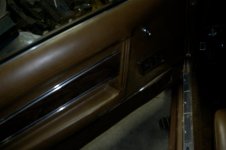 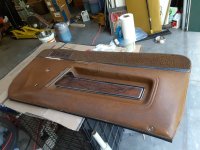 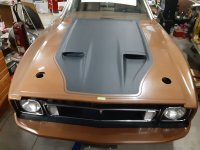 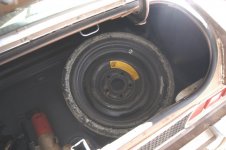