Cool, I'm looking at the same kit for my car. Did you block off the cowl vent as they want you to do? Outside air only comes in through the side windows then, right? Any thoughts on this matter?

Vinnie said:
Cool, I'm looking at the same kit for my car. Did you block off the cowl vent as they want you to do? Outside air only comes in through the side windows then, right? Any thoughts on this matter?

Yes. Unfortunately that's how it is designed. Definitely one of the drawbacks is that it only recirculates air. At least I still have the driver's side air inlet working since my car was original non-air.

Another upgrade over the winter was the front suspension. I installed Mike Maier's MOD1 suspension with single adjustable JRI coilover shocks (https://mikemaierinc.com/products/64-73-mustang/front-suspension/64-73-mustang-mod-1-front-suspension-kit/). This suspension is awesome. The car is super responsive, rides nice and stays very flat when cornering. The strut rod and LCA are mounted to the chassis with bearings. You can feel the road a lot more but not to an excessively harsh point. Definitely a sporty/racy feel. The coilovers are great to adapt the ride height. I decided to lower the front end about 1" from what it was. The springs are located further outwards in the UCA than stock making them more effective. The UCAs are non-symmetrical to allow for more caster without pushing the wheel to far forward. I am now running a 5 degree caster. The sway bar is 1 1/8" from Hellwig. Overall, I am very happy with it. Installation was straight forward. 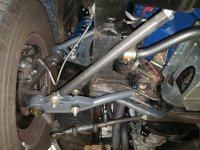 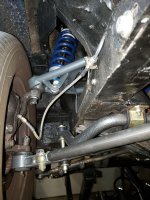 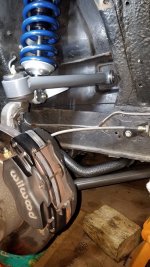 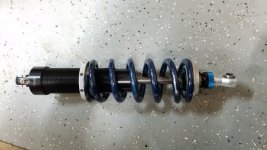 Wow, that looks very cool and interesting! Nice to hear your whole installation pay that much out and you have a great driver feeling and street response. Not only good looking but good driving. Fits more to your other mods on the car - great  :thumb:

Next step is thread 200 tires so i can push the suspension even more. I will keep the Magnums but switch for AutoX.

And I can't forget to post my custom made cross-brace, export and Monte Carlo bar. It is based on Mike Maier's for 70s Mustang (https://mikemaierinc.com/products/64-73-mustang/chassis/64-70-mustang-mod-shock-tower-brace/). I bought his DIY kit which comes with the shock tower pads and straight tubing. I had to redo the firewall brace, bend the tubing, modify the pads and weld. I still need to paint it. I will eventually post a separate thread with more details.

PS: don't spend too much time looking at the welds :whistling: 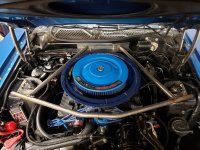 A long time without updating this thread. I typically do the major work over the winter so I can enjoy the car late spring to early fall. This winter I did work on the heads including porting, which is another long story that soon I will sit down and write about. I did a lot of noise cancelling in the interior and doors, added a fuel pump relay to my EFI, fixed some rust on the rear fender and installed new spindles. I may forgetting some other minor tweaks but these took most of my nightly winter work.
So today I want to talk about replacing the spindle. I got spindles through Maier which in reality are the CSRP (https://www.discbrakeswap.com/) ones drilled for Wilwood brakes. Replacing spindles is kind of straight forward but I got stuck in removing one of the ball joints. On the driver's side I had some difficulty with the upper one but with the use of a jaw puller and some heat it came off. However, the lower on the passenger side was a chore. I broke three different tools and ended up making it work with a modified Autozone ball joint separator. I had to grind off so the jaws can open enough to fit the ball joint. This ordeal took three trips to the hardware store in a matter of few hours. In any case, it took a lot of modifying of the joint separator in combination with a lot of heat to get it loose. But at the end I won the battle. This happened a month ago but I thought it would be interesting to share my experience.

Here is the culprit ball joint: 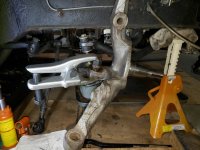 The war zone. A lot of tools from my arsenal were used: 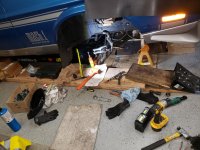 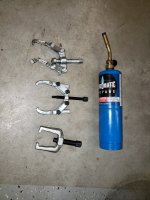 And finally the winner. The ball joint separator from Autozone after grinding to allow for more jaw opening and to prevent it from sliding: 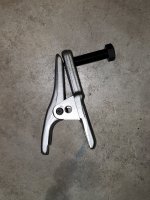 I won, for now..... here is the spindle, suspension and brakes all assembled. 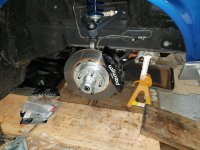 I wanted to share here a few pictures taken of my car at the last track and AutoX events I did.
Track or HSAX: 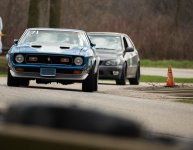 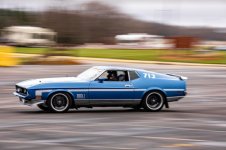 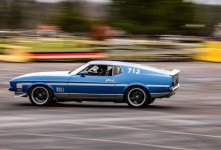 Thanks for the pics, your car looks really good on the track and seems fast! I can even almost hear its sound... Do you have a roll cage in it?

timachone said:
Thanks for the pics, your car looks really good on the track and seems fast! I can even almost hear its sound... Do you have a roll cage in it?

The pictures make it look fast with very good panning from the photographer
I have no roll cage and all is good. Steering feels great!