back in may is when i last had it out the garage and running. thats was when the 521 detonated itself to death. i pulled the motor to send back to washington. i brought the old 466 to a machine shop to get re-ring and re-bearing'ed even though it didn't need it just so i can have some paperwork and documentation with it to sell to somebody. i installed a slightly smaller cam in it that a 460 builder suggested to me and a new set of BBF only rockers (i had a rocker built for both BBC and BBF 1.70 rockers when i needed 1.73).

i picked up the motor the wednesday before last. started putting parts back onto the motor and giving her a coat of paint all over. the saturday i had my trusty helper help me install the engine, transmission, driveline, exhaust in less than 3 hours. the next day alone with the kids, i managed to sneak away and install all the accessories and clutch. the tuesday i had to plumb up a power steering cooler because my header is so close to my steering box so i didn't want to melt any orings again on this box.

tuesday after work i had my trusty helper help me break in the motor. i did the first 15 minute break in at 2000rpms and the temp never got above 160. i turned her off to cool back down and did another 10 minutes of break in. by that point, its time again to take my son to football practice. the wednesday, exactly one week after picking it up, i reinstalled the inner springs and with the kid's football practice in between work, and time going to bed, thats all i got done that day. i adjusted the valves on thursday and did another 15 minute break in period with the inner springs installed. everything went great so i buttoned everything else up. and again, my trusty helper helped me install the hood back. again, kid's football practice comes. after i get back its now dark so i took the car around the block a few times to get some mileage on it.

on friday i get more mileage on it after work to break her in moderately to slight aggressively. i then was told of a car meet the next day when i was forced to wash her up and polish the wheels. afterwards, i played with the clutch on the driveway. at idle i slowly let the clutch out and let the car climb up the driveway and doing that over and over and over for abotu 15 minutes. i never smelt a burn clutch but after a while it was harder to put it into gear. i hope this was the sign that the clutch FINALLY meshed up with the flywheel (SOME OF YOU MIGHT RECALL THE CLUTCH WAS SLIPPING BIG TIME WITH THE 521 AT THE TRACK) and didn't have the recommended 500 miles on her. i put the car on jackstands and found the cable a little looser now (the locking nut was still super tight so i know it didn't loosen up). i adjusted it up and off i went with the clutch and i hope the clutch doesn't slip and i break it in real good.

the next day i drove her out to the car meet and WOW does this smaller cam thump. i think its noticably faster. we had a few miles of highway miles and a few more of city. man does the motor love 3rd gear on the highway . i was told by the guy at superior clutch who built my custom clutch to drive it VERY AGGRESSIVELY and try to get the clutch to slip on the highway or wherever i can to get some serious rpms and speeds. and still nothing.

i will say on saturday was the most fun i've had with the car in a long time OFF OF A TRACK!!! the car was down for 2 months due to being TDY in england and waiting for the old motor to be overhauled un-needingly but i did it anyways to make it more marketable.

BTW, this motor is for sale already. its just a temporarily thing so i have something to drive as my 521 is waiting alumium heads and to get back to me.

sorry for the blabber, i'm just so excited to see the car move again and to see it be so much faster.:shy:

Olie you know what is coming

Olie you know what is coming

i'm at work so i'm trying to upload from facebook. however, i have ALL THE VIDEOS for all of the break in period and the mileage marker i had on there before breaking it in so when somebody wants/picks it up. they will know exactly how many miles are on the motor and how it was broke in.

pic is coming up! 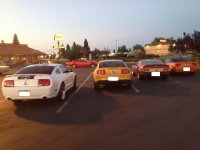 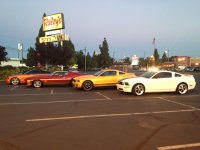 Looks good!! 71-73's look so sleek and diffrent when stuck next to other stangs..lol...Makes them all look like pinto's

Big brothers tend to do that!

Sounds like your making best use of time squeezing in working on your car. It's always great incentive to get it out on the road.

Sounds like your making best use of time squeezing in working on your car. It's always great incentive to get it out on the road.
Click to expand...

the work part isn't the hard part, its fitting in my son's football practice. i have to take him to practice and i help coach so its not like i can just drop him off and pick him up.

my days goes by so fast its almost like a wash, rinse and then repeat until saturday morning. pretty soon, saturdays will be the game so yeah.

Back in the saddle!!! The Mustang rides again!