Been a lurker for a couple of years, taking in great information from many of your threads. Enjoying the site very much.

The short version of my story is that I've been wrenching on cars since about 11 years old. Dad always had Fords.

Got girlfriend knocked up, had to sell. Always missed it.

Always intended to one day get another, but chose to raise family, focus on career, and then grandkids got in the way.

I purposely chose to hold off for a long time because I was always realistic to the amount of commitment, work, and money it takes to go down the old muscle car road.

Back in 2015 finally began looking again. Made the decision that if I could find one close to what I had, would pull the trigger and bring it home.

After some time, came across this one on Craigslist. Watched it for quite a while. Then finally made the phone call. Made the arrangements for a road trip to New Jersey to introduce myself to this survivor, the day after Christmas, and hauled her home.

I wanted a car that needed some of my love and attention. Not wanting perfect, but not wanting a wreck either. I've always understood the best way to get to know a car, is to work on it.

So anyway, the seller had posted about 25 pic's of the car from most every position. She had some front driver side fender, valance, and grille damage. She also had all the signs of age and neglect from a car that had been garaged for 20 years.

Most important...…. She looked cool, she had the 351 Cleveland engine, and the Ginger interior.

The seller and his brother found the car and got it running again. They were car enthusiast themselves. We had some good gab, made the deal, and headed for her new home. We've kept her running and would take short trips just to keep everything loose, but held off on diving into major repairs yet until I got more free time.

This summer made the decision that it's time. She's now in the garage getting the attention that she deserves. And I feel like I'm sixteen all over again! 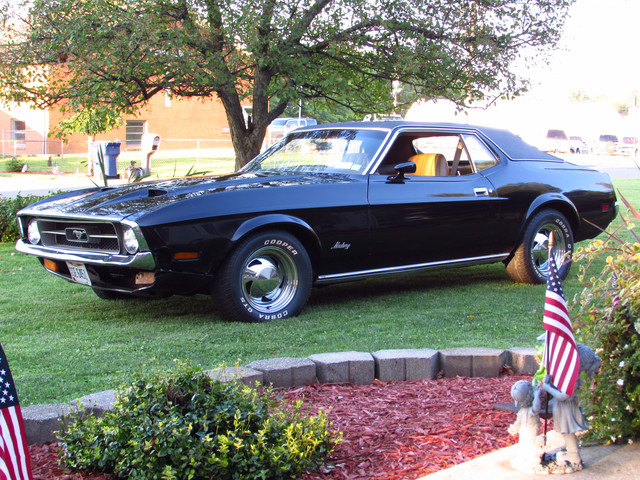 There's more to the story, and will post updates and more pics as time permits.

The threads on this sight have already helped significantly.

These cars look good in black. Is that original color on yours? I didn't think they did a black exterior (71 only unless special ordered)

with the ginger interior but don't have time to research right now.

Welcome aboard from Texas!

I'm just fixin' to get ready to start to get going.

Welcome aboard. Always glad to see another Buckeye here. What part of Ohio you in?

Welcome from Marysville Ohio - Where are you located?

My Car
1973 Ford Mustang Coupe. 351C 2V. Auto. All original, been in the family since new. Originally a California car, it's never seen snow.

Welcome from Florida! I am a native Ohioan myself and I grew up near Youngstown. Glad to hear you were able to attain your long lost love.

These cars look good in black.  Is that original color on yours?  I didn't think they did a black exterior (71 only unless special ordered)

with the ginger interior but don't have time to research right now.

When I bought the car I hadn't studied up much on original car spec's. Wasn't until I got it home and was making an adjustment to the rear deck lid that I spotted the original color hiding beneath a rubber seal. They did a decent job covering up the original paint, but clearly wasn't a complete tear down job.

And you are correct, Black wasn't a color option for the 72 Grande'.

So at that point I wasn't quite sure how I felt about it. I went to the internet to pull up images of Golden Glow Grande's. Found one that is an awesome looking Mustang. 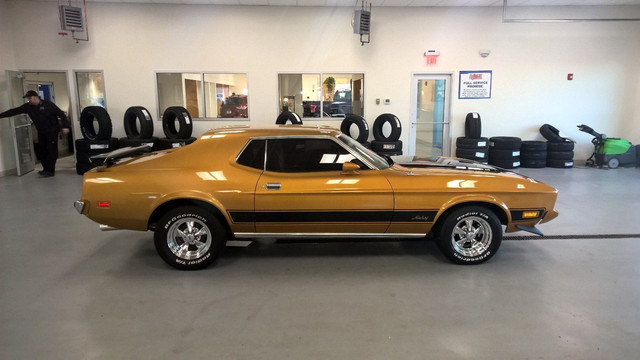 I like that look a lot. The only snag is mine has the black vinyl top.

If it's done right, it could still look pretty cool as long as the right combinations are brought together, like striping, or blacking the hood panel center. Not sure what we'll do, but that will be a ways down the road. Might get done when I get closer to retirement. I don't see having the time for a complete teardown until then.

Welcome aboard.  Always glad to see another Buckeye here.  What part of Ohio you in?
Click to expand...

I live in Heath, Licking County.  about 30 miles east of Columbus. 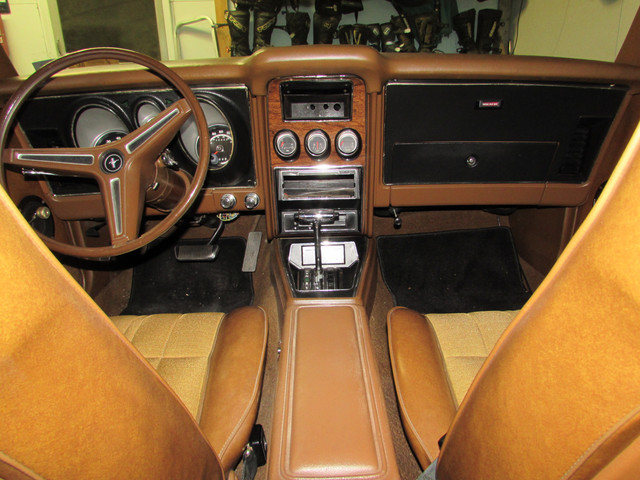 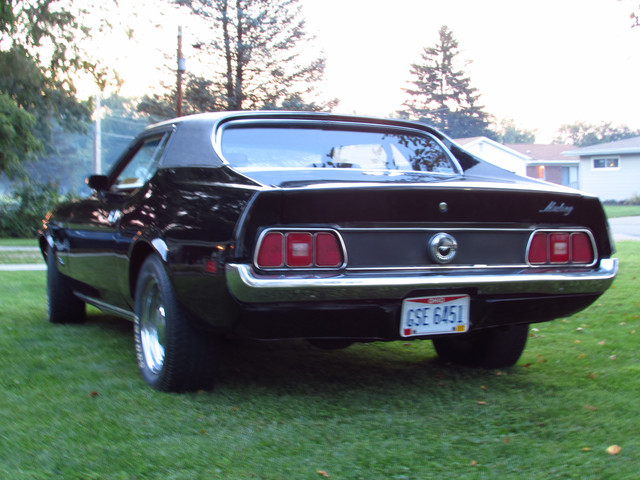 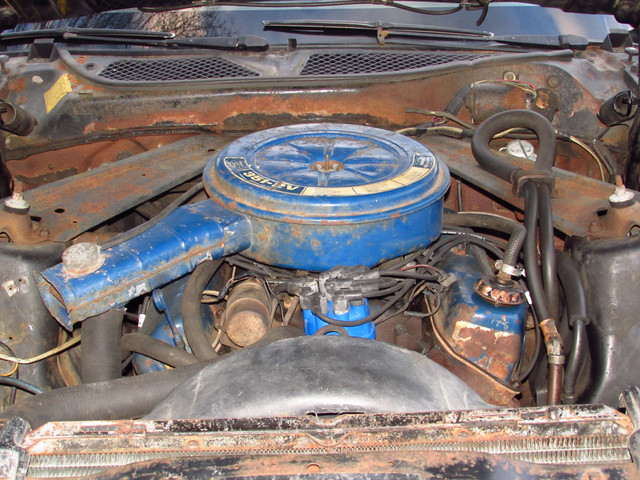 Have a couple of coupes for parts one with really nice Ginger interior parts and one with good body parts
Click to expand...

I've been on your website a couple of times. Good chance will be taking you up on the offer.

Welcome aboard.  Always glad to see another Buckeye here.  What part of Ohio you in?
Click to expand...

I live in Heath, Licking County.  about 30 miles east of Columbus.
Click to expand...

I know where that's at.  Used to travel to Newark.  I'm a little north of Cincinnati.  71coop is over in Marysville.   The Golden Glow  is a sharp color.  I think a black vinyl top could look great with it.  Black out hood, stripes and spoiler would flow well.  Need to play with the picture in an image editor program.

Welcome from Seattle! My story is similar. My first car at 18 was a 73 Grande. Had to give it up like you, and got back into the club a few years back. Congrats on your purchase. Keep us posted as you go.