my 71 Mach 1 is in the paint shop, looking for opinions. I know it's my car, my choice. just looking for thoughts. It was originally Wimbledon white, Vermillion interior.

I wasn't real big on the wimbledon white, so I went with polar white. No stripes on the rockers, front and rear valance also polar white. Only going to have the hood and trunk striped,

and  Mach 1 on fenders. Opinions on stripes, satin black or argent. staying with the vermillion interior

Satin Black and add the lower body stripes.... it helps break up the body a bit and looks great.

I almost painted my car white and really like the look on our body style.

Another vote for lower body stripes in black. And instead of a decal for the thin line above the rocker panel; tape and paint.

But as you said it is a personal choice how you want it to look.

I agree that the rocker paint is kinda a must do  with the hockey stick stripes.  The Bold wide 73 Mach stripe can have non painted rockers and still look fine to me.

I have the hockey sticks and rocker paint.  I like the way everyone compliments how the car looks fast while sitting still.  Ford graphics designers did a old job of accenting the body to make it look long and sleek.

For colors of stripes, I like a contrast, but you have an interesting thought there.  Argent stripes on a white body would give almost a ghost effect I feel.

Good luck. I am a stock guy, no good at custom mods to cars.

I'm counter to the current consensus, I think your plan would look great. I'd say argent stripes and no to the rockers or the hockey sticks the dark lower body makes the car look visually higher and pencil thin. I also think it makes the car look too busy.

IMO white with silver looks great and then a vermillion interior... FANTASTIC!!  Black on a bright white would be too stark of a contrast.

I found this pic searching around on Google. I think white and silver look great. 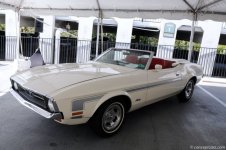 The lower blackout makes the car look higher to me.  Going color keyed to the bottom of the rocker gives a lower appearance.  Personally I dig your plan.  No black rockers on my build.

Interesting to see the varying views on the subject.

I can get behind the argent stripes for a subtle color scheme, but I’d personally add an argent rocker.  I don’t think the rocker color is always necessary, but I think in white the rocker sans blackout  makes the car a little less sleek and more bulbous.


I definitely understand folks with a contrary opinion on the rocker blackout (greyout?).  On my yellow car I do sometimes think the car looks sort of narrow with the blackout, and have even considered lowering the blackout line to under the door instead of the body line as a bit of a compromise... but the body line is such a natural place for it.

It sounds like he said he's not planning on hockey stripes.

I was originally planning on hockey stripes for mine (since my rocker bright strips were damaged), but after seeing almost every '71-'73 with hockey stripes &amp; spoilers, I decided to be different and stick with the 'no stripe/no spoilers' look.  Oddly enough, as one who believes in making how you like, my car is actually pretty much stock except for louvers, wheels, and other non-cosmetic mods.

Personally, I think the white/argent looks awesome!  Kind of softens things a bit - a lot like Lazarus's car: subtle, but still there.

How about Red as a contrast color? 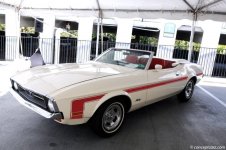 That would be a personal choice, I think I prefer the argent.

I think the red stripe would look better on a silver car with a vermillion interior. Either way the trick is to match the stripe color to the interior color. Different reds would look weird.

Since you seem to be not doing side vraphics, what type of striping are you doing?

I appreciate all the input. Justinc1973 thanks for that pic, made the choice easier. My mind is made up. shouldn't be long and i'll be able to put some pics up

Looking for some paint advice

How was it originally in the trunk, the fuel tank , undercarriage and the interior of the body ?