First, I’m a newbie, first post.  I recently retired and it’s been 30 years or more since I did any car work and then it was mostly GM products. I picked up a 73, 302 coupe for my grandson and I to work on.  It is supposedly a 55k mile car. We’ve replaced the original FoMoCo shocks and swapped the perfectly good single exhaust for duals.  Under the hood, it appears all original except someone has redirected some of the vacuum lines.

I stumbled over this thread and thought I would share.  The valve covers were leaking so I replaced the gaskets.
Question: I can find no documentation on red and orange valve springs.  Any ideas?

BTW, I have struggled with maintaining the originality under the hood vs. upgrades and finally caved in to my grandson’s ideas and my disappointment with the anemic, smog laden 302.  It will look different under the hood before the start of next year’s cruise season. 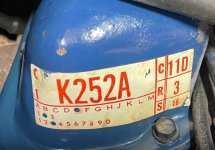 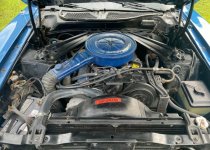 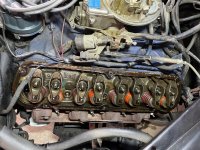 I can't tell you exactly what the colors mean, but it seems pretty obvious that one color is for the intake valve and one is for the exhaust valve. The color may have signified more than just the placement, but also the actual spring pressure or other things, but it would be hard to figure that out nowadays. I do know that Ford used colors on everything to tell the assembly line workers what to install. If your car had a competition suspension the front sway bar would be marked with 2 yellow stripes and a green stripe (at least in 1971), different components had different colors on them. So when a car came down the assembly line it would have a build sheet with it, on the build sheet it would say install sway bar with 2 yellow stipes and one green stripe, install springs with one orange and one purple stripe, install leaf springs with 2 green and one purple stripe. The parts pulled for the car would all be differentiated by the colors on them. There would be parts bins with different sway bars with different colors on them, and different springs with different colors on them etc... The build sheet would just specify the colors that needed to be on the part for that specific car. I would assume that they probably did that on engines too. Your 302 when the head was being built probably called for orange intake springs and red exhaust springs, and that is what you see there today.

BTW that is an excellent looking head, there is no sludge, varnish or anything on it. It is super clean, whoever had this car really kept up with their oil changes, or the engine, or maybe just the heads, were at some point not too long ago rebuilt. Looking at the photo of that valve cover with the factory decal, it does not seem that those heads have ever been off that engine. Nice find, car looks very original and well maintained.

Colors are as 71PJ stated, for assembly line workers to identify parts needed for a specific assembly. Ford build sheets had color codes for quick identification.

The tag on the valve cover is explained in the pic below. Calibration code will determine which vacuum diagram you would reference, as different engine/chassis/transmission combinations had different setups.

FWIW, the only smog device on your engine is the EGR system, which is easy enough to disable.

First thing to check on these engines is the condition of the timing chain. Ford used a nylon coated cam gear which will shed it's teeth as it ages, and the chain stretches. Video below explains how to check it easily. 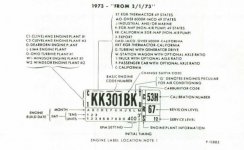 Howdy and welcome from San Antonio!  You've come to the right site for your Mustang build, which looks like an excellent granddad grandson project.

Thanks!
71PJ, I’m trying to verify that this is the original engine while planning some easy performance upgrades.  My searches only revealed color code stripes on valve springs except one thread that said something about orange performance springs.  Was hoping to hear “Yeah, it’s a 73 302” or “Those are after market springs”. I’ll keep looking for clues.
I’ve picked up an Edelbrock F4B intake and a 600 cfm Eldelbrock carb, not installed.
The 72 forward 302s have 8-1 compression and only new pistons will fix that, not ready to go that deep.  I’ve read that the distributor has retarded timing and mechanical advance.  I’m thinking I’ll go to an electronic distributor to cure the mechanical advance.  I’ve heard the cam timing is retarded, too.  Any suggestions for the cam?

HK, thanks for the help.  When I got the car, the distributor vacuum advance was connected directly to the spark port on the carb.  I disconnected and plugged the EGR and it made a little difference.  Also, the 2 port transmission diaphragm has been replaced with the single diaphragm and connected properly.  I will definitely check out the timing chain.  Back in the day (over 40 years ago), I tore down a Chevy 350 to replace the cam and found a cam gear with very little nylon left.  I was surprised it would run.

Thanks Sheriff.  We enjoy working on it and going to cruise-ins and shows.

Hello Pops,
I'm glad you stopped by, liked what you saw, and decided to stay. It's always great to have someone from the GM camp see how much fun we are having and join the Blue Oval crowd. You can bet your grandson will remember this time you spend together working on this car forever.
If trying to verify the engine's originality, you may be able to check the rear of the block. A flat pad at the upper rear of the block should have a partial Vin with the model year (3), assembly plant code (F), and the six digits of the vehicle numerical sequence number. Your '73 would be marked 3F-XXXXXX. Sometimes these are very lightly, haphazardly marked, so it may look as though nothing is there. By law, '68/ was to have these Vin stampings, sometimes it's a challenge to read them!!
In '73, Ford started using different intake and exhaust springs on some engine families in their car and truck lines. Your '73 302 should have purple exhaust valve springs. The intake springs were a mix of red and orange. The red spring is the original color specified by the powertrain engineers. Still, with different vendors providing these springs for 302 and 351W's, it may have been a matter of using the two colors for identifying the vendor for part warranty issues. The intake spring part # is C9OZ-6513-B, and I have seen both colors of springs come out of separate boxes with the same part number. As already posted, that cylinder head looks too clean to be an abused engine.
There is a phrase we use here called "While I'm here, I might as well." It works for someone who starts to replace a leaking gasket and ends up with the engine on his engine stand. As suggested by Hemikiller, checking the timing chain and sprockets would be good insurance. The cam sprocket with the nylon teeth was something that the big three used, and I was told because it was quieter. I have a 351C that felt like it was pulling a 50' trailer full of cinder blocks at times, then all of a sudden, if more than your shadow touched the gas pedal, it felt like it had so much power it was going to pull the seats out of the floor. When I pulled the front of the engine down, I found a cam sprocket with half the nylon teeth gone. I have no idea why it was still running, probably waiting for me to be somewhere I wasn't supposed to be and then quit! I guess this was an early version of variable cam timing!
Lots of knowledge and experience here, so never hesitate to ask if you need to know or discuss anything. And remember, there is no such thing as a stupid question here. Welcome to your new Mustang home!

The first picture indicates where the block partial Vin "Should "be. The others illustrate the red and orange springs with the same C9OZ-6513-B part number. 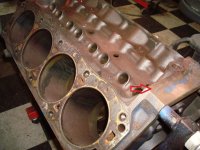 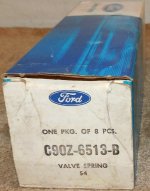 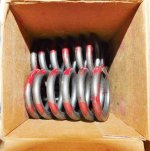 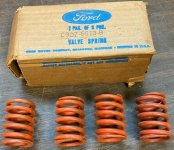 Change the intake and carb and it should pick up a bit, you can add a set of headers and dual exhaust and it will pick up a bit more. In my experience what makes the biggest difference in these cars with an automatic transmission is to change the rear gearing. By 1973 most of these cars had 2.79 gears, that thing will never be able to get out of its own way with that gearing. You put some 3.55's in the back in it will really wake it up, please be aware that this will change the highway driving experience, as you will be turning quite a bit more RPM's at highway speeds, but around town it will be a blast. You can always do a cam/lifter/spring upgrade, but with the 8.0:1 compression you are limited to very small cams, it would still be worth doing. Recurving the distributor will also make a big difference, especially with the low compression and highway gears.

If you want to go all out you can get a set of aluminum heads with smaller chambers which will help you raise the compression, and it will let you use a bigger cam. All depends on how much you want to spend.

I’m going to add a Pertonix to the factory distributor and change the mechanical advance springs.  Anyone recurved a 73 distributor?

Now, lemme see about a cam.