I have been busy this past winter replacing the interior of my 73 vert, and one part of this was buying new TMI Sport ll front bucket seats to replace the stock buckets.  After stripping out the old carpet, and laying down sound barrier and new carpet I placed the new seats in position and realized that they were way too far forward.  With the sliders all the way back, when you place your hands on the wheel your elbows are jammed into the seat back.  All the way forward and nobody could actually get into the front seat much less drive the car.  I figured I must have done something wrong, checked my work, and it looks like its done right.  So I reach out to TMI, who refused to talk to me, referring me to the vendor I purchased from.  I reach out to the CJ rep and long story short after 4 weeks they tell me I have the wrong seat mounts and they will send me the correct one, and then after 9 weeks they finally admit that the seats that I was sold were not designed for the seat mounts they I bought from them and are linked to the seats on their web site, AND they don't have a seat mount that is.  In fact, if you look closely at the episode of Wheeler Dealers featuring the Mach 1, where they also used TMI seats, you can see Mike driving the road course looking a bit like a T-rex.  So it appears that this is a pretty major design problem.

In the mean time, I had placed an order through TMI for a matching back seat, and since they consider this a custom order, its not returnable.  So, I'm stuck with these seats, which I really like except for the part about them not working.  CJ did agree to refund me the price of the seat mounts and let me keep them with the understanding that they were off the hook.  So I fabricated an extension that bolts both to the seat and also to the seat mount.  I wanted to alert the members to this issue and also share the solution that I came up with.  The extension effective moved the position of the seats back 5 inches, which accommodates me easily at 6'0".

I bought a couple of 36"x1" steel bars from home depot, cut them in half and drilled four holes to line up with the two holes in the seat mount, with one set of holes 5" offset from the original ones.  Also had to drill a third hold in the seat mount bracket. The extension is shown in the foreground with the original on the left. And yes I do have Hot Wheels hanging with my tools.  :whistling: And here is a pic of the seats mounted and pushed all the way back.  I gave the extension assembly a shot of black paint before mounting.  I used to wonder what you guys meant when you talked about "fitment issues".  I know exactly what you mean now.  It took a while but I got the TMI seat mounts to bolt onto the floor and then get the two different parts of the TMI seat mounts to align together. Still have the door cards to go, and now that the seats are in, liking them alot.

Man, this blows. I had some fitment issues with my TMI seat covers and contacted them. They responded very quickly so I gave them all the info where and when the covers were purchased and after that they stopped communicating. Now I wished I would have had a custom interior made by an upholsterer. No more TMI products for me or CJ pony parts for that matter!

They look good. I am glad you found a solution. The extension may be a good idea to increase the space in stock seats as well.

I hope they dont bend due to weight and fatigue. Keep us posted.

And all of these vendors want our business? Off with their heads!! Let's not support them if their customer service is bad. Power to the buyers.

The seats do look good!

Is this still the same incorrect mount that you wound up with and had to modify, or have they changed it to the correct one? It's the one linked from the seat page.

Good to know. I was looking at those same seats last weekend

Yeah, pretty sure that's the same. The mod is pretty simple though. All you need is the bar, vice, saw and a drill. If you go that route and have questions, let me know.

I missed the original post, but this is crap on TMI's part. I did a quick configuration and added it to the cart and the same bracket is paired with the 71-73 seats option.

If you're going to charge nearly $3K for a set of seats "designed" for a specific car, they need to fit that car. 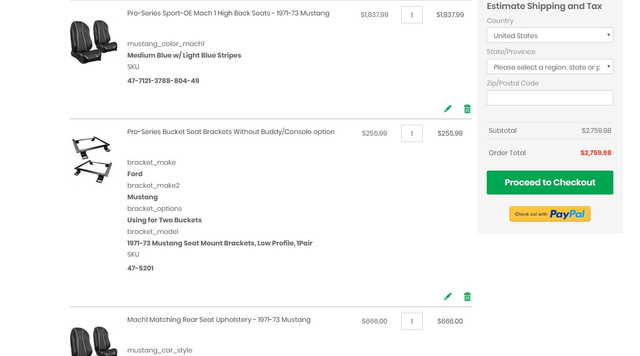 So . . . I put on TMI upholstery on stock seats-disappointing-I had to get an upholstery man to install as there were parts of the upholstery that were improperly built and he had to sew in tabs etc.

As to the seat rails, did you look at the stock seat rails to see if they would work? When I put aluminum Kirkey racing seats, I dissected some stock rails to remove the adjustability, welded two metal strips across the rails and mounted the seat to the strips. Worked like a charm

I vaguely remember eyeballing it at the sight of first trouble, and rejecting the idea. Can't quite remember exactly why.

So on second glance, I can't be certain that the product in the cart pic is the one I received. The base on mine has two rods running front and back with connecting horizontal flat bars, with the floor mount bolt hole brackets welded onto the flat bars. The bars shown in my pics then connected to the rods, front and back. The cart pic looks like it only has flat bars, no rods. Assuming I'm interpreting the pics correctly, it could be a different base. Sorry, my mistake.

The seats are nice and it sounds like you were able to mod a fix without a lot of hassle, so it's not a deal breaker since you already did the hard part.

I'm still undecided about what I'm going to do, but they look really nice in your car.

B
Base for Sparco seats?