Weird question, but I have a 1973 coupe. Wondering what color the bolts that hold front fenders on are supposed to be, Black (phosphate), yellow (dichromate) or silver (zinc)? Suppose they could also be stainless.

If you are talking about the top of the fenders, the 1972 had the yellow/gold color. I confirmed this during restoration. I would think the 1973 would be the same but, lots of running changes in these cars. Chuck
J

Thanks for the quick reply.

73 would be the same as C9ZX references. Often referred to as Gold Cad plating.

We have a 1973 Mustang Convertible that was barn stored over 40 years, and has an original 21,000 some odd miles on it. It has never had any body work performed on it, other than a minor repaint and treatment of the trun lid's vertical area just under the trunk lock cylinder area. I looked at the various photos ad videwos we have on file, looking for an "accidental" photo or video frame of the inner fenders showing the retaining bolts. I found one (ad only one) video that happened to have a few frames that shows an inner fender mounting bolt fairly clearly. It is not as crisp a photo as a JPEG would have provided, as it is a JPG extraction from a video frame that has a little movement included in the various frames that captured the bolt i was looking for.

It is possible that at various times during production the type of bolt and coating may have changed. All I know is our vert was built on 6/1/1973, and the inner fender bolts look silver (Zinc) to me. The pony cars have been away for Winter Hibernation. But, if this is something that leaves you wondering if you are getting the most correct answer possible I would be willing to go over where the pony cars are hibernating and take more underhood photos.

That said, I was positive the inner fender retaining bolts were silver (Zinc) from memory. Our 1973 Mach 1 inner fender bolts look the same (built 4/3/1973). But, that vehicle has undergone a few fender removals for some repainting work over the past many years. I had and have no reason to believe the inner fender bolts are not oem, but it is possible they have been replaced. I also check on photos and videos for our 1969 Shelby, just to see what was visible i the many photos and videos we have of that vehicle. Amazingly, for neither the 73 Mach 1, nor the 69 Shelby, did I see any photos that might have been useful. I do know, however, for a fact the 73 Mach 1 inner fender retaining bolts are Zinc/Silver in color. Same for the 69 Mach 1 (which underwent a deep restoration a few years ago, so the fenders had been removed for that).

I did some more digging, this time using the 1973 Body Parts catalog I have on file (PDF from Forel Publications). I have attached a PDF of page 121 from that catalog, It shows the bolt to be Ford part number 57030-S, which is a "Yellow Zinc" finish per the description when I search on that part #. Why they look like silver/Zinc on the vert is something I do not now, but I am betting they uses a few different finishes with bolts used during assembly, depending on what was available at any particular time.

Anyway, after checking several other web sources I am convinced the proper bolt used to mount the inner fender of the First Generation Mustangs (specifically 67 - 73) is the Zinc Dichromate, Yellow/Gold finish bolts with conical washer.

Please refer to the attached file.

I hope that helps solve the mystery...

Wow. I love this forum. I hope someday I can actually be the one helping instead of the one always being helped. Yellow it is!

jackf said:
Wow. I love this forum. I hope someday I can actually be the one helping instead of the one always being helped. Yellow it is!
Click to expand...

Your day will come. For myself, after being a raving fan of Mustangs since 1971, owning several since 1972, and having worked on them at a Ford dealership in the 70s and 80s before moving into the computer industry, I have picked up a lot over the years. I did have a nearly 30 year hiatus when "life happened (wife, kids, career focus, etc.). But when I was forced into medical retirement about 4 years ago I went hog wild and picked up a 1969 Shelby GT500 (my favorite car ever), a 1973 Mach 1, a 1973 Mustang Convertible, a 1997 Honda Del Sol 2 seater sports car, and finally a 2020 Shelby GT500.

When I did retire I found I had a lot of time on my hands. Some of it was being diverted to the pony cars, car shows, and driving said pony cars - at least during car Season. In in Winter Hibernation, or when not playing with the pony cars, I found myself reading through various Mustang and Shelby forums - initially just to see what was going on with other fellow enthusiast across the country, then finding there are some really deeply involved enthusiasts elsewhere in the world. And I saw some of the folks had questions that I was more than qualified to answer with my background. I found there are some other very experienced and knowledgable folks in these various forums (not the least of which is this one), and some of them have some really deep knowledge and insights - stuff beyond what even I had picked up in over 40 years. So, as much as I enjoy sharing what I have learned, I love learning ever more from others who have more experience than I do in other facets of this arena.

In time, as you learn and apply ever more you will find yourself in a position to share back. It will happen when the time is right. Meanwhile, ask away and do not be concerned about a question being too simple, you may be surprised by how often I see questions on issues I have not had to ponder. I also enjoy seeing folks asking for help with electrical or engine vacuum routing issues, have often taken the time to track down a diagnostic approach using various schematics in my library, then happily shared my thoughts and annotated schematics. In this particular forum we are fortunate to have some (other) very experienced folks when it comes to electrical systems. As good as I may be in those particular areas, I always end up learning more from them (they know who they are, heh heh), and I always appreciate them sharing their knowledge freely.

As I see it, the best way to repay others for their help is to graciously help others as you begin to build experience. I would hate to think how much less fun this hobby would have been without the Internet and the various forums and groups we can be part of. The Internet indeed changed everything. Everything...

There are no dumb questions; only dumb answers. 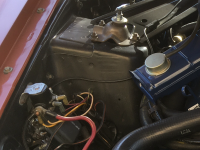 Hello, jackf,
You have already received lots of great info. I want to add a little more insight into the different fasteners used by Ford in case anyone has any questions on these bolts in the future.
For some reason, Ford did not release a service part number for the fender bolts on the '71-2 Mustangs. All the '65-72 MPC (Master Parts Catalog) illustration shows is a black star by the 57030-S bolt, which indicates "Not Available." No part number is listed for the '71-2 Mustang in the text section. The part number for the bolt was reinstated and became available starting with the '73 model year. As specified by the Mustang Club of America (MCA) judging rules, the correct bolt is "Zinc Dichromate & Cadmium Finish." I have seen Ford service parts for these bolts with two different finishes and part numbers. 57030-S36 is the yellow finish I've most often seen on original cars. The other is 57030-S2 which is a phosphate & oil and has a dark grey finish like seen on some under-hood components. This is the one we received the most often as a service part, although occasionally, we would receive the yellow "cad" version marked "MW." That indicates that the part can be "Mixed With" the other part number as they are functionally the same, although the appearance/color may vary.
AMK fasteners offer three versions of this bolt. The phosphate and oil are B-11598, Zinc/Yellow B-10783, and there is a stainless version, B-13871. Great company to deal with, but they do have a $30.00 minimum order and a $10.00 shipping charge. Unless you need additional hardware, you could find some at other sources using the Ford part number 57030-S36.

As I've done in the past, I remind people that Ford, like the other manufacturers, is in the business of mass-producing vehicles and not show cars. So there will always be variances and fuzzy areas for us to figure out on these 50+-year-old cars. Considering the sheer number of bolts, fasteners, screws, etc., used by Ford at all their plants in just one day, it would not be uncommon for multiple suppliers to be utilized by Ford. Sure, the engineers specified the "S36" cad plate bolt, but if there were any supplier issues or other production line problems, they would substitute whatever it took to keep that line moving at their discretion. In short of an apocalypse, the production line shut down for nothing!

As far as wanting to be more helpful to others, you've taken the first step by being here. Many talented, knowledgeable people here have paid their dues with busted knuckles and wearing the "Been There Done That" T-shirt that would bend over backward to help you. Unlike other forums, you won't be ridiculed for asking what you may think is a dumb question. Never hesitate to ask anything, regardless of how you feel it may be received. That's how we all learn!
Last edited: Nov 18, 2022

Here is a picture from the 300'ish mile survivor 73 vert I documented many years ago. This is the same car Bob Perkins used for his article on the 73 undercarriage detailing. I have many other pictures of this car if needed. This car is 100% original at the time of taking these pictures. This car was not dealer prepped so it still has all of the production applied window decals and grease pencil marks on the glass.

Silver (or black on doors), where exactly?

Here's a double whammy question for the group.