Racing stripes on a hardtop...Thoughts?

So I was looking through craigslist for mustang parts and came across this coupe. It completely changed my plans for the paint scheme and I think if your stang has a non-mach1 hood, these stripes are the way to go! What do yall think? I think it looks perfect.

Reminds me of an AMC Javlin

If we must, lets polish this turd.

2. terminate them both before they reach the ends of the hood and trunk

4. add a pin around them

5. perhaps add some color to the sides or lower parts of the car to compliment them

The javelin thing didn't cross my mind till you said it. I think it's the grill and bumper that's causing some of that.1972Mustang, those are some good points to bring up to make it better looking. It's hard to visualize the stripes being terminated before it hits the grill.

rough but the jist 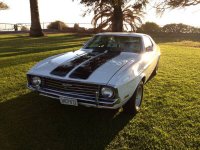 
I am not the biggest fan of hard tops, however this is the coolest looking 1 I have seen I would paint the roof rather than have vinyl but the contrast of white and black really suits the shape I think it would be hard to improve on the look of this Grande

My '72 had stripes on it when I bought it in the 90's. It looked okay, and everyone complimented them. I did have lot's of people say "is that a Camaro?". As you guys know I totally changed my paint scheme but here's a before pic. 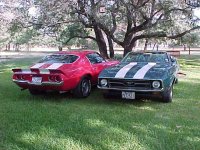 You need to do the rear valance too behind the license plates.

Here's what mine looked before I had it restored and painted yellow.

Ok, it's a vert but still it has a standard hood.

I kinda like it. Mine will be white when I paint it also. Maybe a little bias.

Sent from my SCH-S960L using Tapatalk

I actually loved the stripes on mine and it was a really hard decision when I went another route with the new color scheme. It was a toss up!

It's your car, and if you like the looks of stripes go for it. You'll find that most people will like it, and no matter what you do there will be those that are vocal in how much they hate it.

I've always liked the idea of doing something different to my vehicles, to make them different than the crowd, never anything outlandish, sometimes subtle, but they were/are mine and I'll do it my way.

What I've done with my '71 is take a model and cut up masking tape to try different schemes on it. Gives you a good idea of what it will look like, especially if you take pictures of it. My car isn't finished, yet, but someday...

I like the stripes on the plain hood, They can look good if done right.

Paint the car how you want .It is a big choice thou that you are stuck with, I got red painted ram air scoops and glossy stripe on my hood...Incorrect as all hell..But it still looks good to me and i get alot of comments about how good it looks...When i repaint the hood. im going to do the blackout glossy again but more correct, " i mite still keep my red nostrils " hehe

That was a good job on the photoshop to round out those stripes. I think the double stripe thing is either a love it or hate it type deal. You see em lots on the 65-70 mustangs and thought it was cool that this person kind of continued that tradition for the mustang. From about 71-2005 the number of mustangs with stripes dwindled. Definitely don't want it to look Chevy-ish though...

If we must, lets polish this turd.

2. terminate them both before they reach the ends of the hood and trunk

4. add a pin around them

5. perhaps add some color to the sides or lower parts of the car to compliment them
Click to expand...

I don't "hate" the idea of stripes on the mustang. I hate, on any car in the world, bad stripes.

4. positioning doesn't lend itself to the body lines.

Good striping doesn't have to mean 2 stripes over the car to look good either. it just has to accentuate the styling of the car. Here are a few Aussie examples just to show how stripes work on cars you may not be familiar with. As an aside the magenta charger is what a lot of people think our mustangs are here in Aus

Well said, and that charger is awesome!

Luke, when my sis came over and saw the mach for the first time, she said, is that a valiant? Hehe

My thought on stripes in general:

Stripes were originally used by race teams so that the support crew and spotters could identify thier car from a distance during a road race, since many of the race cars looked similar. This allowed them to be ready well in advance to hold up the big board with a message on it for the driver as he flashed by.

Each race team usually had its own unique and individualized striping pattern, along with specific color combos for the car and the stripes.

To that end I surmise that the stripes were the last item on the list of priorities when preparing the race csr. You know, drivetrain and suspension, body tweaks, aero aids, wheels and tires, safety wires and hood pins, window straps, etc...

Because of that, I feel "racing" stripes of any kind only look appropriate on a car that looks like it is otherwise fully prepped for a race event.

On a street car, I realize it is all for style, not function but it still needs to follow a theme to look cohesive and purposeful.

On a mach 1 the stripes look like they belong, as they just reinforce the "hardware" that is already visible: fastback shape, ram air hood, spoilers, hood pins, performance wheels and tires, etc...

Conversely, when ricers add a big stainless-steel salami-slicer "Fast and Furious" wing to trunk lid of the otherwise 100% stock Toyota Camry that thier Grandmother gave them for graduation, it looks ridiculous in conjunction with brown paint, skinny little tires with plastic hubcaps and the toddler's car seat in the back. And it breaks Granny's heart first time she see's it that way.

Stripes should be an enhancement to a fully-realized theme that is already visually present on a car. Otherwise they just look out of place.

This is just one old man's opinion. Feel free to spit with disgust in disagreement.