My 73 had its hood cut out, im trying to get it to its "original" form. I have a 73 Fastback, 351 Cleveland 2v Carb. I want to know what kind of hood yall recommend, from CJ Pony or Ohio Mustang?

Also, i want to put in the functional Ram Air Intake kit that is sold also on CJ and Ohio. Do yall have a recommendation on which?

Third, but not least, swapping over to the Ram Air Intake, i have read that the 2 barrel carb is meant for the Ram Intake, because the 4 barrel, if i were to swap it, will need extra parts/more complicated. Any clue on this?

You have some mis information there.

1) As far as where to buy the parts from, a lot of people here will tell you OMS as they are good site supporters.  I have no experience there as I have original Ford Parts for mine

2) With regards to 2 barrel versus 4 barrel, there is no difference when using a stock intake setup or a non high rise intake.  So to support this, it is a fact that a factory Ram -Air system from a Boss 351(4 Barrel) will drop right onto a 2 Barrel Cleveland.  So the stories you have hear about a 4 Barrel needing a special setup, they must be referring to a high rise intake of some sort.

There are different Air Cleaners for the 429 Ram Air cars versus the 351 Cars, other thatn that, they are all the same pieces.

Just how 'original' do you want to be for your car?  Unless you see the RAM AIR option on your window sticker and/or Marti report,  even the non functional RAM AIR hood with block-off plates would not be original to your car.  It would have come with a standard flat hood.  Just FYI.

Yes, it would not be original to my car. But i love the functional aspect of the air intake/hood scoop so im okay with letting that one go.

This is CJ Pony 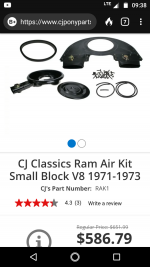 This is Ohio Mustang. 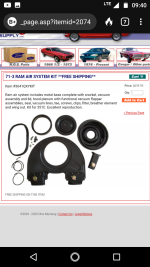 Mine has both filters and all the hardware 639   no tax

No inflated prices then put things on sale from OMS

CJ is a big conglomerate and has to charge sales tax

I'd buy from Ohio Mustang. Do a search on CJ problems and complaints. Chuck

c9zx said:
I'd buy from Ohio Mustang. Do a search on CJ problems and complaints. Chuck
Click to expand...

+1 on buying from Don at Ohio Mustang. Don will take care of you and your car needs as if you were his only customer. Excellent top shelf service all the way!!

Ok one thing this very unclear. The 73 mounting surface on the carburetor for the air cleaner housing is different. It is about 1" closer to the hood than 71 &amp; 72 due to EGR plate and different engine mounts. The air cleaner box on a 73 is different. The repo units are made to which dimension???? If you put a 71 -72 on a 73 it has to compress the rubber seal an additional 1" or bow the hood up. You need to do some more research before you buy.