Hi y’all. I have been contemplating trying to make a removable hardtop for one of my convertibles (72 and 73) for some time. I think I would probably use an early 70s challenger or cuda roof skin as the base. I suspect one of those may fit well and avoid issues trying to make buttresses from a same year Mustang coupe work with the vert quarter.

I have a friend with a 71 cuda and my first step will be to take a crapton of measurements to see if it’s even possible. If it’s close, my next step would be to try to buy a repro mopar roof skin and a broken 71-73 Mustang convertible frame, so as to integrate the windshield attachment and the window frames. Fyi, the door and quarter window fit seems to be the most complicated/scariest part to me (the different quarter window is another reason I decided against using a coupe roof).

I figure if I can get the vert frame pieces from the quarter window forward integrated into the mopar roof skin, I would then move on into filling in the rear bottom of the c-pillar and some sort of rear glass with a bottom frame edge/seal. Ideally, the rear part would fit over the boot trim (or some modification of boot trim) such that the soft top (down obviously) would still be able to be in place.

It’s a crazy idea maybe but was curious if anyone had ever considered such a thing. Let me know if I am out of my mind.

Below are some images I pulled off the interwebs of the mopar skins for reference.  I think it would fit very well style-wise. 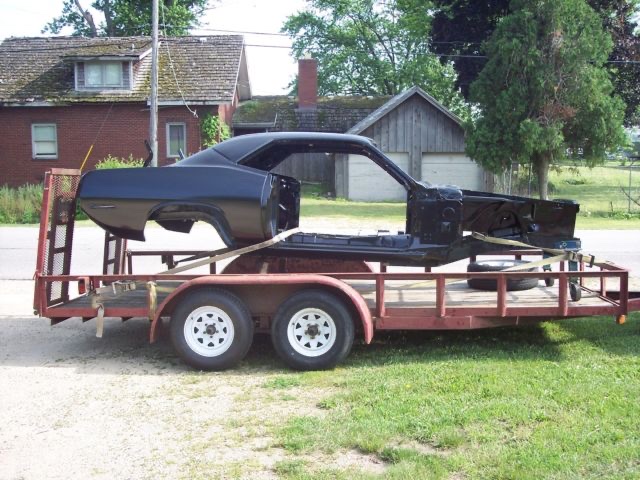 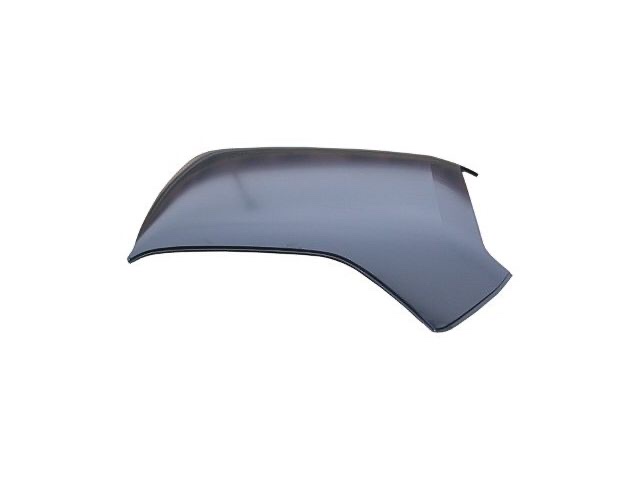 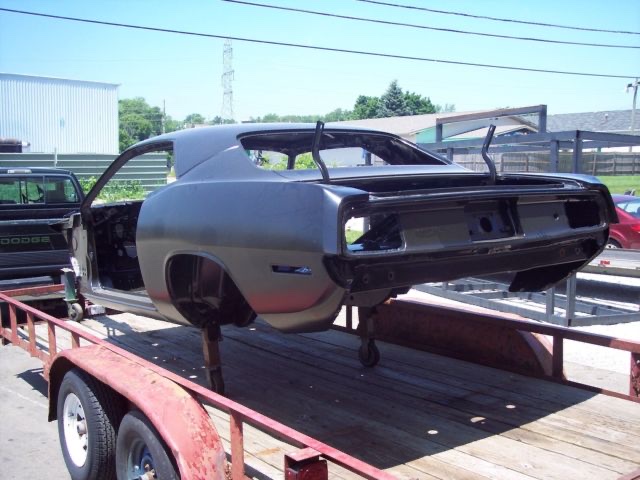 Ford did sell removable hard tops for the 1964 1/2 - 1967 and maybe 1968 Mustang convertible. I have three of them and have found 7 over the years. They were called a Towne Top and yes Ford did not make them but were sold by Ford dealers. I have a copy of the sales records and one of mine was sold by TASCA Ford in R.I..

When I got in touch with Mr. Murphy, in Illinois, that is sort of the keeper of the info on them he was shocked. He had looked for like 35 years placing ads in Hemmings, Mustang Monthly. MCA and other places and had located two others besides the one he owns. He wrote an article for MM in 2008 and stated then that only 3 were known to exist and not with the stainless Crown top strip. I have two of those.

When I told him I had found 7 over the years and two more since then he was in total shock.

Here are some pictures and links to info on them. I have original advertising brochures, advertising post cards, install instructions, sales records. Dory Development in NY was the mfg.. It is pretty evident that Ford gave them some help the tops were available the same week the Mustang was released. You do not build a mold, find all the trim, headliners, glass rear window and trim and do it overnight.

There was also another mfg. Parish Plastics. Never found one of them there is a pic of one in the book Mustang Does It.

It sounds like a great idea but has never caught on. The price in 65 was $289 so add a couple zeros and that is the price of a new mustang then.

The second try was what the 1995 Cobra and again did not sell.

There have been a couple other tries for the early mustang one that make the vert into a fastback. They sell on ebay and all you get is the shell. You have to come up with a rear window, trim, seals, attachment, and when on you cannot open the trunk.

Another year that Ford did a removable hardtop that was made from steel was in 1962. They took the top off a 1961 Starliner and put on the vert. Had to have fillers in the side windows and was done so NASCAR could use to get a better roof design for racing. It failed also. I have an original Ford brochure announcing it for sale.

Not trying to redirect you in your quest but have done some fiberglass work in the past. I was going to local technical college and the school built a Bonneville Flats car. The teacher in the automotive holds several records on the flats with a Mustang II with an engine under 300 CI. I think like 250. He is in the 200 mph club with that tiny engine.

Anyway this car was to be a front wheel drive with a 23 T bucket rear, a Ford twin I beam front axle was welded together used in the rear for the rear steer.

I was in the Auto Restoration class and was ask if I wanted to assist in building the nose section for the car. We took blocks of foam not like the Styrofoam with beads but the more dense material. We blocked up the nose from the T-Bucket to a sharp nose. We shaved it down with knife the ground and sanded. You can use the clay that a taxidermist uses to smooth out areas or polyester filler. We then hand laid up the nose. I was given the task to do the final shaping and smoothing of the nose. I HATE FIBERGLASS. For weeks I went home and itched. If you have someone that can spray up the gel coat and the the cut glass fibers you can spray you a female mold of your model. It does not cost much to model with the foam and you can get a perfect fit to the windows, windshield and around the quarters and trunk. There are suppliers of the rubber seals in roll form.

You could actually apply a stick on film on your current convertible top and use it as your pattern.

The Towne Tops had redwood structure inside the fiberglass to give something to attach trim and rear windows to. I think the brochure gives weight at 65 lbs. It will fit through a motel door so if traveling you can take off and leave in your room. I am going to loan one of mine to the Mustang Owner's Museum for display. The only recent sale I found was in 2009 if I remember correct and was $3,500.

I did a post about the Bonneville car we built will go see if it is still here has pics in it. The Towne top has a vinyl top on the outside and a headliner inside. The front has two screws that drop through the holes where the clamps hook and had two washers and nuts to attach the rear is held with two clamps so no holes drilled.

Again sounds like a great idea but just never takes off.

Here are some pics of the Towne Tops I have the white one will go on car as is still original. I have some NOS emblems also.

Links to pics and info. http://blog.virginiaclassicmustang.com/2008/03/mustang-towne-tops-hardtops.html 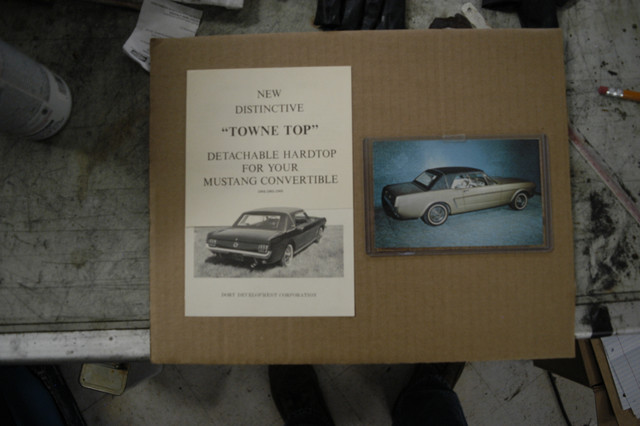 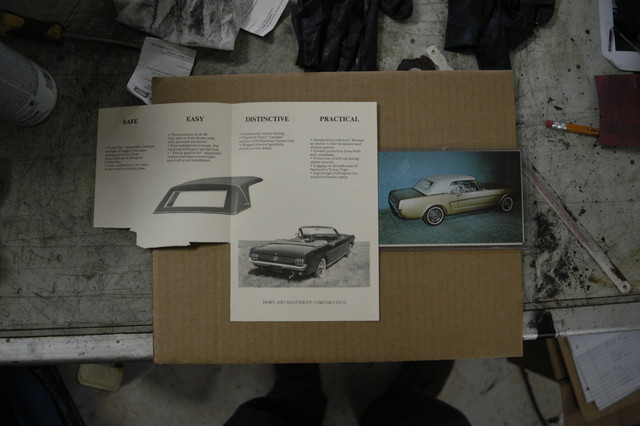 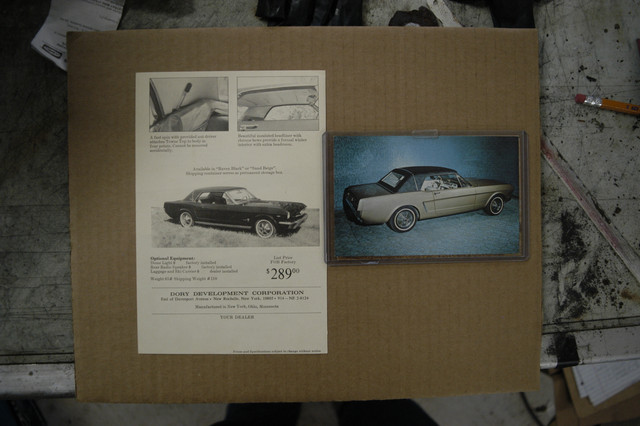 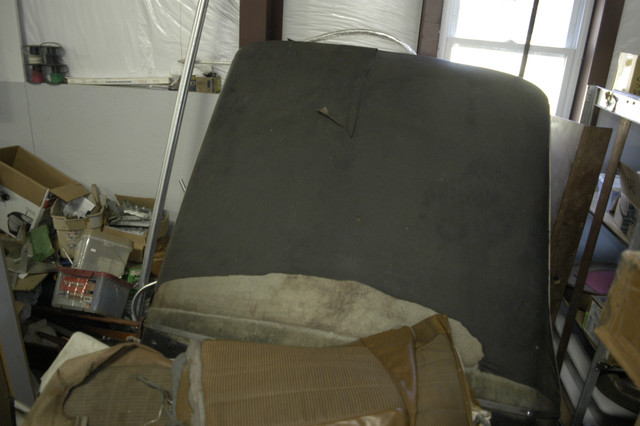 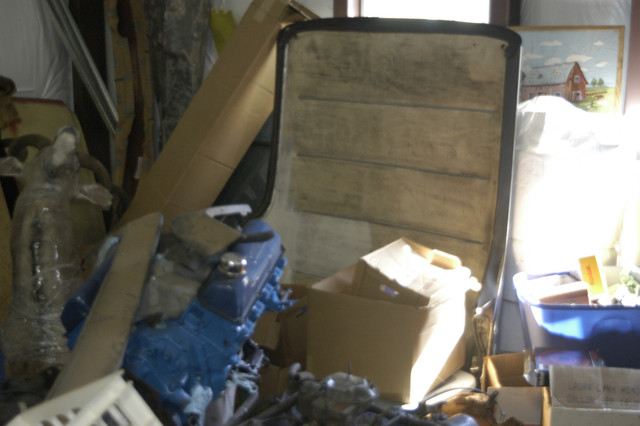 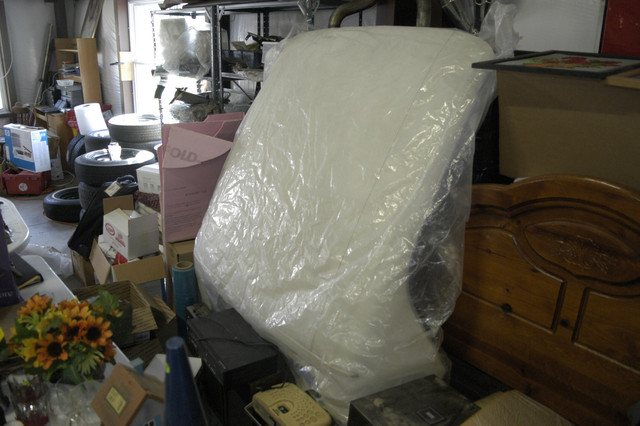 I have seen them for first-gen camaros and I actually had one that made a 69-72 Blazer into a shortbed pickup. Had not seen the ones you have (very cool), but I have seen the removable fastback for 65-68 Mustangs; like you said, the trunk situation is clunky (and a 71-73 fastback is massively different from a vert in the trunk and quarters anyway). I know they are rare and nobody really wanted them. I was sorta just wanting a one-of-a-kind for myself.

The fiberglass is pretty intriguing. Perhaps I may try to make a steel one then give it to a shop to replicate in fiberglass. If I get more serious I may reach out to you for details on how the rear attaches on the ones you have. very curious there.

Odds & Ends Parts for Sale from Restoration of 1972 Mach 1