Replacing the driver's side seat track because it's very reluctant to catch anywhere but full forward or full backward.  Ordered Friday from CJP, arrived today (Monday)!

The bolt(s) holding the track to the frame were too short by about 3/8", which is the roughly the same as the bushing between the floor and the seat track.  I chose to keep the bushing and use the original bolts.

But these springs... (see photo)  The one shown attached to the old seat track is the original, and the smaller spring to the right seems to be the replacement.  When installed it's expanded roughly the same as you see in the original. 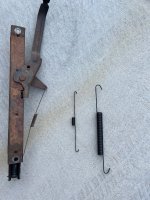 73MustangCoupe said:
The larger spring goes from the seat track base to the seat bottom, to make the seat ride forward when the seat track release is pulled.
Click to expand...

Just saw that from researching in the Ford manual.  But you explained the "why" - thanks.  Clearly I didn't have one, but now that I think about I recall there was a very rusty one in the trunk when it first came home. 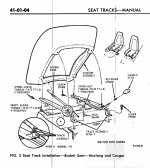 Just learned something new, my drivers seat does not have that big spring as I just had to change one of the brackets. I guess I need more parts, lol.

B
Base for Sparco seats?