Some fuddlement fixed, onto the next two, start position not working, right turn signal not working

Thanks to Hemikiller, Kilgon, CV-72 and some others, we got some items working again by fixing the grounds. We still have two electrical issues going. The start position on the ignition switch, or perhaps I should say ignition cylinder, does not engage the solenoid when turned to start. No power flows down that wire. We are using a remote starter switch to drive the car. Also, the right turn signals do not go on when switched on. We put in the HiPop LED bulbs and recommended flashers for turn signals and emergency flashers. The left turn signals are fine, the four-way flashers are fine. We had the steering column out to install the American Powertrain clutch kit. I have tried pulling apart both of the connectors from the steering column and reseating them with no luck. Nothing appears to have been damaged. The pins on both connectors are straight and the wires on both sides seem in place.

Is there a possibility that there could be one simple solution or does it sound like I need to pull the column and verify wire continuity? I have a pipe to put this dream in. There is an ignition switch which appears to have more wires coming out of it than needed to service the ignition, so I was wondering it the turn signal switch routed through this and it might have been damaged or gave up in spite while the column was out. I don't recall noticing it while the column was out, but I was not looking for it, either. I have read it is at the base of the column, but don't see a way to access it without at least dropping the column. The fuses all check good. We replaced the ignition cylinder already, so I would hope it did not fail. The original was very worn and sloppy.

Everything was working before we pulled the engine and did the rebuilt and transmission swap.

Just occurred to me, is there a circuit that is closed when the now replaced automatic transmission was with a manual was in park and if that circuit is not closed, the engine is not allowed to start? If so, suggestions to defeat it would be welcome. I presume it might be on the part of the harness that deals with the back up lights which I also need to get working. I have a harness for that, but it did something odd, probably because of a jumper that needs to be cut or modified. I was going to dig that back out of the debris field and post a photo in another thread.
B

In a cunning stroke, I took the automatic shifter and reconnected it to the two connections in the car and VOILA, it starts. There are two connectors on the shifter harness and the black does the job of enabling start while in park. The black one makes four connections. 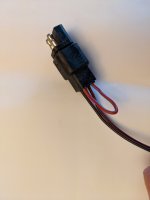 Just a suggestion but maybe I would try drawing out circuits in question. Seeing it in a subset simplified circuitry might help. I also have cut and pasted tech manual sheets together and used colored pencils to trace modes. In your case it looks you might need to reverse engineer the existing wiring and the new updates you did.
B

cv_72mustang said:
Just a suggestion but maybe I would try drawing out circuits in question. Seeing it in a subset simplified circuitry might help. I also have cut and pasted tech manual sheets together and used colored pencils to trace modes. In your case it looks you might need to reverse engineer the existing wiring and the new updates you did.
Click to expand...

That's pretty much what I am trying to do, figure out which wires on the connector in the car do what. One wire must pass 12 volts to the back up lights when the circuit is completed to the lights. Another must pass 12 volts to the starter solenoid. Probably the one that is hot when the ignition is on, presuming the backup lights only work when the ignition is on, will be the source for the backup lights while the one that is hot when the ignition is turned to start is the source for the solenoid. Then I just need to which wire lights the lights and which turns the starter. My son has the car at work and his school and work schedule along my work schedule will probably delay this until Thursday. Thanks for the post as that helped prodding me into working out a way to solve this. I am now wondering if the T5 circuit for neutral will work to enable starting Apparently, judging by what I am seeing in some Google searches, it is used for purposes other than enabling starting since theT5 was designed for modern cars with electronic engine controls. If that's the case, then a simple jumper ought to deal with it. Famous last works, of course. I could always simply run a longer wire into the passenger compart and make my son have two shifters, one for the T5 and the FMX one just for the electrics. Joking here. He would not be happy.
B

I found this harness at NPD which appears to have the jumpered connectors on the opposite side of the one I have. If this one is correct for the backup lights and the jumper allows current to flow to the solenoid, then I can mod the one I have and two problems down, just need to get the right turn signals going. This reminds me of working with 60's Brit cars electrified by Luca, the Prince of Darkness. 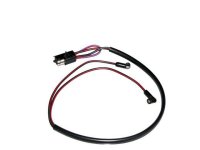 Thanks! That would be the red/blue wires on the harness in the car, correct? I think the harness I bought has the colors correct, but it jumping the wrong two terminals, hence the backup lights coming on all the time when the ignition is switched on.

The T5 has a has a reverse light switch along with a neutral sense switch. From what I have researched, the neutral sense switch is used for different purposes than the neutral safety switch and there is some question about how much current it is supposed to carry. My son has already learned to not start it in gear, and I grew up on Brit cars that didn't have that sort of thing, so not much trouble if we don't have a neutral safety switch.

7123 backup lights can be white/purple (supplying power) and black/red for outgoing signal. Red/blue are always NSS and crank signals to starter solenoid.

Thanks, that end actually came with the transmission. I think the issue I have is the harness I bought to connect it to the car via the car's harness is really intended for a later car than a 1st Gen, so they jumped the wires differently. That's my theory, anyway. Assuming I don't have to work Wednesday due to the storm, I should have time to sort it out and adapt the harness to our needs. Also thanks Midlife for the color codes on the wires.
B

Ah ha, in between hurricane preps and hurricane demob, I had time to mess with the ignition switch side of that connector. The harness I bought was indeed wrong and jumpered the wrong terminals on the connector. Thanks to the info provided and using the now unneeded FMX shifter to confirm it, I got it right and the car actually starts when turning the key, so no more need of the remote starter, what will they think of next! How 20th century! My son was suitably shocked at his dad's brilliance in eventually figuring it out. Now to badger him into getting the car off the ground and showing him how to use marine grade heat shrink butt connectors to get the reverse lights to work. He will get a detail for his upcoming birthday and hopefully the rest of the paint someone threw at him will come off.

Thanks all for your help. I have said it before and need to say it again, this forum ROCKS.

Gremlins in the blinkers. And side marker lights. And...
2

No start; no juice with the key in on or start positions but accessory works fine