Hello everyone. Does anyone have or know someone who has a late 70's Ford accessory 3 spoke steering wheel for sale? See picture for reference. 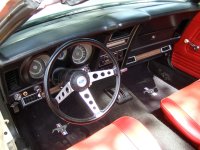 Where did that pic come from?
J

MooseStang said:
Where did that pic come from?
Click to expand...

I googled 71 mustang sport steering wheel and it popped up.

Justin,
Not sure if its still available but here's one listed for $100. Worth a message to the seller for sure, it looks super nice. Its in Statesville, North Carolina

They were also used in late 70's and early 80's trucks. Most of the ones used in the cars did not have a functional horn button in the center due to the horn operation was moved to the turn signal stalk. The truck wheels all used the center horn configuration. They made them in both leather wrapped and a vinyl wheel. I had one of these wheels in my Mach 1 for a short time when it was first put together until I found a perfect two spoke.
J

Use caution when purchasing these, as mentioned some do not have horn provisions. If you look at the back of the wheel it should have holes for the steering wheel lock and 2 rings for the horn posts. 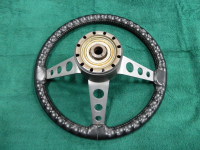 The later ones are flat. 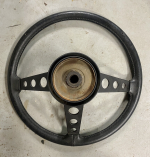 Installed. Feels and looks much better than my aftermarket wheel. 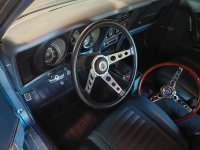 Justin, That looks really good. I like the look allot. I also like the feel of a larger, thicker wheel. Where did you find one?

Looks great, I’m guessing the wheel came out of a 78 Mustang ll Stallion based on the horn button
J

PoFoMoCo said:
Justin, That looks really good. I like the look allot. I also like the feel of a larger, thicker wheel. Where did you find one?
Click to expand...

Mike Berardi. He only had one. The horn button was broken so I bought a Dennis Carpenter repop and swapped the emblem. They pop up on eBay here and there. 77-78 Mustang II.

Hello Justinc1973
That sport steering wheel looks great in your Mustang. Although the thin steering wheel was the norm for these era vehicles from all manufacturers, you don't realize just how thin they are until you get out of a new model vehicle and into your '71-3.

The sport steering wheel with the center blow horn was a production-installed option starting in '77 on '77-78 LTD II/T-Bird/Ranchero (N/A in '79), '77-78 Mustang II, '77-80 Granada, '77-80 Pinto, '77 Maverick, and '78-83 E-F-100/150-350, and U-150 (Bronco) truck series and sister Mercury vehicles. There was a leather and a soft foam wrap steering wheel with various center emblems depending on the vehicle line and trim level. Most had the brushed finish spokes with a black spoke version utilized in '80/ on select cars and trucks, once again depending on trim level.

As clevelandcoupe and jasonwthomson mentioned, Ford used another version of the 3-spoke sport wheel on Fox platform vehicles. These models used a turn signal stalk-actuated horn with no contact/slip ring on the underside of the steering wheel hub. The '79-82 Mustang, '78-82 Fairmont, and sister Mercury vehicles used this wheel with both black and brushed finish spoke versions, again depending on model and trim level. Although there were several other Fox platform vehicles, Ford did not use the Sport wheel on them. Ford wisely started transitioning to the center blow horn beginning with the '84 models, so it was normal to see early models with both versions. I had an '80 Mustang with the stalk actuated horn and hated it; not one of Ford's better ideals.

Several emblems were used, with the Ford oval and the Stallion head being the more popular choices. They were interchangeable between models. The Stallion head version is patterned from the fender decal used on the '76-only Stallion Group option on the Mustang II, Maverick, and Pinto. Occasionally OE Ford versions will show up on eBay. Some sources offer a repo emblem and center horn switch cover for black and brushed finish spoked wheels.

These are nice wheels, but with factory cruise control becoming more popular and not adaptable with these Sport wheels, Ford soon dropped them from the option list. They continued to be offered through the Ford over-the-counter accessory program for a while. The D7OZ-3600-A center blow leather version was discontinued in 1/87. The D7OZ-3600-B foam wrap version, which was used as a replacement for the leather wrap wheel, was discontinued in 1/95. The same wheels were used on both car and truck applications. Since the wheels have been discontinued for quite some time, finding NOS versions would be more than challenging. Since the wheels were installed in three different truck lines way longer than they were offered in the car lines, that would increase your odds of finding a salvageable used wheel.

Now you know more about these steering wheels than you ever thought you wanted!

jasonwthompson said:
Use caution when purchasing these, as mentioned some do not have horn provisions. If you look at the back of the wheel it should have holes for the steering wheel lock and 2 rings for the horn posts.
View attachment 68189

The later ones are flat.
View attachment 68190
Click to expand...

Yes - be cautious which model years you look at. The '78-'83 Fairmonts and '79-'86 Mustangs (Fox bodies) had the horn button on the signal stalk, rather than a proper center hub horn button. My Mom had a '78 Fairmont Futura, and I later bought an '82 Mustang - which had the exact identical interior - and both had the weird "push the signal stalk inward" horn button.

That being said, I loved the steering wheel... even though I replaced it with a Grant GT Challenger.