This car actually looks like it's almost worth the money. But why did they remove the rarest part of the car?! 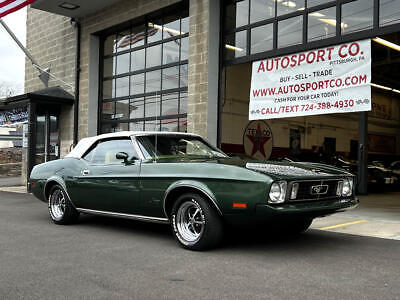 Offered for sale is a stunning, 1973 Ford Mustang Convertible with a 351-2V Cleveland V8, Automatic Transmission, and a Power Convertible top. This car is believed to be a 3-Owner Mustang with just under 33k original miles. This car was sold new in Washington, PA and was sold to the 2nd owner...
www.ebay.com

There are a lot more pictures on their website. I think the low mileage is correct (based on pictures of the interior and engine compartment) and the paint looks original, but it has a flat hood!
I

That's actually one that I'm going to look at this weekend. I did question if he had the original hood, and they do not. It has been repainted, he sent me some of the pics when it was redone. I do think the interior is original, however the pics sent were with interior removed. So not sure if it is, or if was reupholstered/redone at the same time the car was repainted.

Thanks for posting. Even with the hood change, that is a sharp, especially the interior. Good hunting. Post your thoughts (or purchase pics) if possible.

That is a nice looking 73 vert. If there is no rust, and the car has straight panels and undercarriage, I suspect you will be taking that one home. Not listed on the Marti Report is something those 73 verts came with as an included option - Power Disc Brakes. You will have them. I am also pretty sure you will have the deluxe inner door panels. Neither are mentioned on our Marti Report (Elite version), but our vert has both, I read elsewhere the verts included PDB, but I never saw anything about the inner door panels being deluxe on the verts. You can always hope.

One option missing is the factory A/C, but that is not a big deal, especially on a convertible. We have both a 73 Mach 1 and a 73 vert, and neither had factory A/C. The Mach 1 definitely needed A/C, but the vert was fine without one. But, after putting A/C into the Mach 1 we decided to do the vert also. We got our A/C kits from Classic Air. The Vintage Air kits seem pretty good also, based on what I have read from others. But, the shop that installed the kits for us advised they prefer working with Classic Air kits. We are very happy with the Classic A/C systems.

Being a non A/C car, our vert came with the bottom of the capacity 42 or 43 amp alternator. It was sufficient on the vert in its factory setup. But, we added A/C, dual electric cooling fans, a headlight relay that turns the headlights on any time the engine is running, a full length center console with a power panel used to charge iPhones and iPads, a WebCam, and an LED taillight kit. The LED taillights did not add more electrical demand on the alternator, but the other items did. I took the alternator to a local alternator and starter specialty shop, and had it rebuilt using a rotor with added windings. The alternator now puts out 65+ amps, plenty enough to keep up with the additional electrical load with the options we installed. It was well worth the rebuild.

Finding a First Generation Mustang with such low original miles is awesome. Ours was literally barn stored over 40 years when a prior owner became too ill to drive it. When we purchased it the odometer shows under 20,000 miles on it. Now it has just over 21,000 original miles. Ours was not restored, other than new tires and a new convertible top. Everything else is just as it was from the factory (plus added a front spoiler just to give the car more visual edge). The only downside you may find is the very steep 2.75:1 rear axle ratio may cause the Mustang to feel a little sluggish at low speeds. Your 351 may help with that, I can tell the rear is (also) geared quite high on our vert - and our 302 2v does a nice job, but we definitely have a low end performance degradation due to the rear axle gearing. It is not worth replacing the gears with a lower ratio gear set, as the verts were never intended to be high performance vehicles to begin with. That said, even with the steep rear axle ratio gear set the vert is a very fun car to drive, and plenty perky. If it is speed I feel the need for we have a 73 Mach 1 that is built for street/strip performance, a 1969 Shelby GT500, and a 2020 Shelby GT500 I can always turn to for a fun romp somewhere safe. We find the vert to be a very refined vehicle that is a blast to cut around in.
I

I closed the deal on it today and check is on it's way. Hopefully have it delivered in the next week or two. Car looked straight to me, saw very little surface rust in a few spots as expected (haven't seen a 100% rust free one yet in the midwest). It does have power disc brakes, deluxe door panels, and decided A/C wasn't going to be the final factor in a good car. The rear pinion seal is leaking, so one of the first things I'll do with the car is have 3.00 posi installed. I'm also going to be on a search for a factory Ford ram air hood. Still has the 2 bbl on it and may decide to go EFI. Not looking for big power, more of a dependable cruiser. I'll post some pics when I get possession of it.
R

Offered for sale is a stunning, 1973 Ford Mustang Convertible with a 351-2V Cleveland V8, Automatic Transmission, and a Power Convertible top. This car is believed to be a 3-Owner Mustang with just under 33k original miles. This car was sold new in Washington, PA and was sold to the 2nd owner...
www.ebay.com

There are a lot more pictures on their website. I think the low mileage is correct (based on pictures of the interior and engine compartment) and the paint looks original, but it has a flat hood!
Click to expand...

kevken, I too have a special order black 73 Q code convertible. It has a white interior and top. Build date June 15th so close to end of production. Ordered by a Ford executive who went on to start his own dealership outside Dallas in Carrolton. Black looks so sharp! I posted pics and the Marti report when I joined this site in 2021. Glad to find someone else with a black special order vert!