Unlocking the mysteries of the Mach 1

Damn ladies and gentlemen we have agreement amounst the lead answerers of the VIP fun questions. :udaman: Must be true!

And you are exactly right as the question was asked. It was not what options vs standard stuff was on a Mach 1. It was what makes it a Mach 1 and that the 05 on the vin. Period
Click to expand...

I guess if you over think this it"ll drive you nuts , like trying to understand women!
D

Damn ladies and gentlemen we have agreement amounst the lead answerers of the VIP fun questions. :udaman: Must be true!
Click to expand...

Lol. Roy is still ahead by one answer...for now. {insert evil laugh here}

True but the thread got a little off topic(not really) with this post and I was answering it, sorry

Hmmmm, "What makes a Mach 1 a Mach 1" That is the $150,000 Barrett Jackson question......Today? Chinese repops LOL! Don't tell that to the Millionaires who buy these cars like money's no object. Big Grin"

thats where the "05" comes from. no matter what options/packages a car has without it in the vin its not a Mach1

True but the thread got a little off topic(not really) with this post and I was answering it, sorry

Hmmmm, "What makes a Mach 1 a Mach 1" That is the $150,000 Barrett Jackson question......Today? Chinese repops LOL! Don't tell that to the Millionaires who buy these cars like money's no object. Big Grin"

thats where the "05" comes from. no matter what options/packages a car has without it in the vin its not a Mach1
Click to expand...

Tis an excellent thread though if I so say so myself.

My car was built bya chvyguy as a cool winter project,I beleive he did the best he could,car was not complete sitting in a barn for 10 yrs.
Click to expand...

gosh, i hate to resurrect such an old thread, (but it is a good one, still!) but in 1975 when i got my 1972 H Code Mach 1, completely stock, it had duals, with chrome tips, to be sure, and they might have been added. I THINK it had the dual exhaust valance....but I can't remember....I just do not know. Also recently looked at a dead stock 351 Cleveland H code car that had single exhaust, and non-staggered shocks, as people have noted.

We've learned a lot more about the various models since this thread was kicked around. For instance:

Seems like a weird way to do business - but it makes sense in order to preserve the Mach 1 as potentially a 'more valued' model, than the sportsroof it's based from. If you go purely by the numbers game and fair market value of the same, the Mach 1s carry more value all things considered. But even then the water is muddy because of rarity, options, and condition of other models - a 429SCJ hard top, for instance, carries roughly the same value as a 429SCJ Mach 1 simply because it's such a rarity. An H-Code coupe vs. an H-Code Mach 1... not so much (conditions being the same, that is).

Unfortunately for us, the perspective buyers, the human factor has muddied the waters even further, since the common misconception is that ALL 1971-1973 Mustangs are "Mach 1s." As a result, you have shady sellers peddling non-Mach 1s off on low-information buyers... which happens regardless - it just seems more rampant to me and many others around here (probably because we're armed with more information and are seeing these things unfold from a distance with greater objectivity).

All I know is that I [re]built mine as closely to 'as-equipped when I bought it and verified by my Marti Report' before I added the period-correct cosmetic mods. The only things visibly different about mine are:

I read an article somewhere that Mach 1s (in general - beginning in 1969) were supposed to have a clock somewhere in the car's instruments. The '71-'73s had an option for the full console with the clock - but if the full console option wasn't ordered, they replaced the 'idiot light' gauge with a clock. If the full console was ordered, there were options of the idiot light gauge, tachometer, or keeping the clock gauge with a clock delete plate in the full console. The 351C-4Vs [and bigger engines] usually came with a tach and 4-sp., so the center console clock is more prevalent in those models. The 351C-2V and 302 cars with automatics usually came with the clock/speedo clusters.

So realistically, all I need to do is swap the factory style wheels back on and remove the louvers and the car will 'look' like it came from the dealership. That was my intention - despite being a Day Two Restomod, mine is easily reverted back to it's stock 'cosmetic' appearance... even though it has a lot more going for it than a '71 H-Code Mach 1 would've been back in the day.

Sorry to blather on - but my boss is blind... and as long as he hears my keyboard making noise, I think he thinks I'm actually busy. rofl

Kinda throws a wrinkle in the 'only 351C-4Vs had functional Ram-Air hoods' theory, I'd say.
Click to expand...

However...….The seller threw in with the sale the front spoiler, and an original Ram Air set up, ( Ford part numbered) , air cleaner, plenum assy, hood locks, and correct hood springs that he never got around to installing, but which I immeadiately put on the car. I also took the car to the local muffler shop and had them add dual exhausts, along with a replacement rear valence with cutouts and the correct chrome tips for such. Some years later, the car was wanted for use in a movie, and the studios wanted the car a bit more aggressive looking and asked me to add the side stripes and trunk wing,.....which I did for the movie and just left on the car because everyone seemed to like it better. Add to those additions, since I tow with the car, I added a 3.50:1 Trac-Loc, '70 Shelby traction bars ( Traction Masters ), and a rear sway bar along with a heavier front bar.

It was one of the draws to ordering a Mustang in the first place when they first came out,.....is that you could option to the moon your favorite model. So I have added some things to my otherwise restored Mach, but using Ford offered options......the majority of Ford purists dig the car just the same. 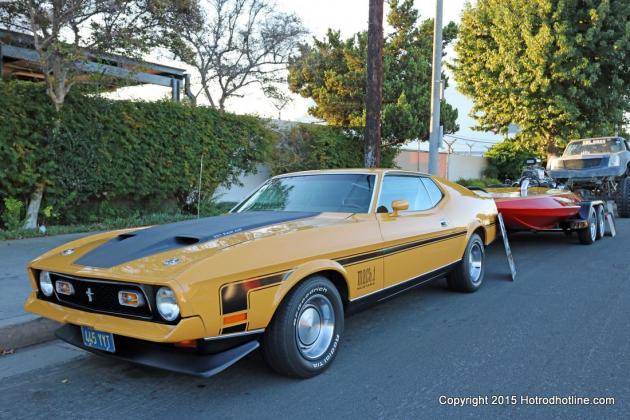 K
Check out how much this car sold for at Mecum Kissimmee!