Ok, I've been up to no good as usual and I had an idea which I wasn't sure how to make it work.

Some of you may remember that I've had my Magnum 500s powder coated a while ago and that I did not really like the result.

But I've always been a sucker for the Mopar style steel rim with hubcaps but no rings look and I bought some hubcaps off Ebay in September but I had no wheel to put them on.

So I thought I needed to come up with a way to make do with what I had here. 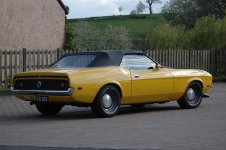 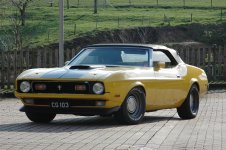 Believe it or not, those are the Magnum 500s underneath those hubcaps.

How do you put hubcaps on Magnums? Well, that's the problem I've been dealing with and I tried lots of ideas which were all crap until I found these clips which are for vintage VWs, Bugs and the famous small vans (or busses as we call them)

The cool thing is that they are located in the UK, so lower shipping costs and no taxes (...yet! Stupid Brexit!!)

I didn't know whether they would fit but for +-30 bucks I thought, meh, let's try them.

And wouldn't you believe it, they fit perfectly!! And I mean PERFECTLY, not only ok. If they were specifically made for those Ford hubcaps they couldn't fit any better.

So now comes the hardest part..... drilling holes in my original rims..... yikes! 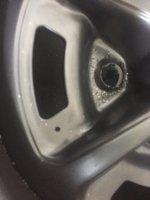 The clips are meant to be riveted on but I chose to screw them on. As the holes need to be drilled on the flat surface (more on that later), I needed to raise them by 5 mm which I did with a M6 nut in between the rim and the clip which raises the clip to the exact height. 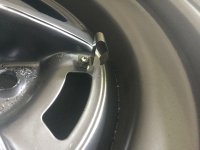 And here's the rim with all 5 clips installed. You can see here that I had tried to screw the clips into the "slopes" first, so that they'd be flush with the hub cap base but I had forgotten that the tilted angle would not allow the clips to work properly. Of course I only noticed it after I had drilled the 5 holes and installed the 5 clips.

Plus you see holes in the flat surfaces that are empty. That was because I then tried to spread 4 clips instead of 5 more or less evenly on the rim but I found out that they were impossible to center correctly, so I had to opt for 5 clips and relocate the two so that they were all in the same spot. Still a lot of trial and error involved.

The other rims are less "swiss cheese" than this one though. Sorry! 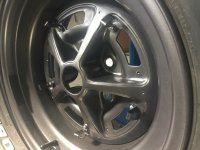 I would prefer the look to be more "deep dish" but that's because the rim has this "pyramid" in the middle. Oh, by the way, I was surprised to find that the hubcaps clear the rim completely. I was afraid the center piece of the rim might be higher than the inside of the cap and that would have ruined it all but in fact only the base (outer ring) of the cap touches the rim, the rest clears the rim perfectly.

Now I wonder whether I should turn the tires around so that the letters face towards the inside and they show only black wall....

What I will do though, and that was the whole idea behind it, is, I will raise the suspension.

The car has become almost undriveable, suspension travel is the width of a quarter. Not a quarter of an inch but an actual 25 cent piece. I could just squeeze a quarter in between the hump on the upper control arm and the rubber bumper on the shock tower reinforcement plate but I had to get pliers to get it out again. The car handles like a go cart but unfortunately our roads do not allow for this kind of setup.

Relocating the rubber bumpers to a higher position is also no option as you can not squeeze in a standard pencil in between the wheel arch opening and the tire when the wheel is turned, so it would immediately hit the fender if there was more suspension travel.

I'm really sorry I have to do this and make my car less remarkable and special but I fear too much structural damage from hitting potholes that make my keys jingle in the ignition.

I guess this is what it will look like for a while, only a little higher, more classic muscle than restomod. Who knows what the future brings...... 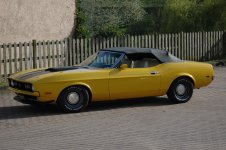 I like that a lot. I love that look as well. Nice work.

Nice! I have been wanting to do that with the Crown Vic wheels I have on mine. I had seen clips like that on eBay, but I wasn't sure how it would work out. Thanks for the info. Now I am encouraged to try it.

It looks good with your color scheme and setup. It looks really good.

Mike, Those wheels have more reincarnations than a cat . I'm beginning to think you have a "shoe" addiction. Chuck

+1  Blackwall out and that look would be perfect!

Mike, Those wheels have more reincarnations than a cat . I'm beginning to think you have a "shoe" addiction. Chuck
Click to expand...

Yeah, it feels that way, doesn't it? I've been wondering too. :

+1  Blackwall out and that look would be perfect!
Click to expand...

I'm gonna need new tires for inspection in May anyway so I'll buy some without RWL. On the plus side I'll have a wider choice of brands. Those Coopers are the only RWL tires that are available except for the BF Goodrich but those are usually a special order and cost more than twice the price of these.

Nice look Mike! I'm sorry to hear you're raising the car. I deleted the rubber bumpers and covers. I have to say though we have some pretty sad roads here in Michigan as well. As you know your car was and is an inspiration to me and my build.

Looks nice! Have you ever been tempted to put on some hockey stick stripes?

Looks nice!  Have you ever been tempted to put on some hockey stick stripes?
Click to expand...

Yes! I even had a set and taped them in place so I could remove the paper on their back and stick them on...... but I ended up putting them back into the box.

I don't know why, maybe because there are some yellow ones with hockey stripes around.

I might be more tempted to go with a 73 Mach1 style stripe but I've lacked motivation so far.

Nice look Mike! I'm sorry to hear you're raising the car. I deleted the rubber bumpers and covers. I have to say though we have some pretty sad roads here in Michigan as well. As you know your car was and is an inspiration to me and my build.
Click to expand...

Yeah I know... sucks, eh? I don't like it either but without the bumper stops the tires will hit the fenders.

Maybe I'll look into some other rims. Now I'm just sick of it all as it is. The few months the car was on the plain black Magnums I realized that I started to care less about how it looks but more about how much I like to drive it and I really don't wanna drive it like this anymore.

It bugs me turn it back into just another regular 72 vert. I'll keep it dropped, only not as much as this.

These are one inch lowering coils with one complete turn cut off. I might try cutting off just about a half turn, maybe a little less from the two untouched springs I still have. That will raise it about a half inch but it'll still be lower than most Mustangs out there.

I need to overcome my reluctance first...

That was an awesome idea and it looks great...except that one hubcap looks all bo-bo.

W
Installed some 'locking' bolts on my valve covers