Anyone got a ballpark number? stored inside, still in car, doesn't run but turns over and is complete. He doesn't want much for it but I have to pull it.
Thanks, Chuck

As I read through the web this pair would be around 1.000 grand in this condition but complete.


My random thoughts:
1) 69 is too early for a thick bulkhead block.
2) Some early T-birds used a really weird crank-driven PS pump (which is hard to find parts for) and a shorter than normal water pump which will cost extra to convert to a normal accessory drive.
3) I don't see a point in building a 429 when a crank swap gets you 30 more cubes, meaning the pistons and crank are going in the trash.
4) The trans will be the longer tailshaft version, and some of the big car stuff has a weird trans mount setup that makes it annoying to fit in an application that uses the normal flat pad mount.

I'm playing debbie downer/ worst case scenario for you because if we were talking about me I would overpay for something like this, wind up refreshing it anyway because once you get it home you've got to crack it open to see what's up, and at that point you may as well re-ring it. Then scope creep will set in and you'll be throwing a cam in it, and at that point why not a stroker kit, and then all the stock parts are going in the trash...

I was hording big block stuff for years and finally gave away all of the thin bulkhead blocks and iron heads I had as they won't get used in a good street strip build so why keep tripping over them?

MJ, Thanks for the input, especially the bulkhead thickness issue. I had no plans to use it myself but thought I might sell it at a profit to help support my vehicle addiction. I'll pass on it. Chuck
G

mjlan said:
2) Some early T-birds used a really weird crank-driven PS pump (which is hard to find parts for) and a shorter than normal water pump which will cost extra to convert to a normal accessory drive.
Click to expand...

What do you mean? I went out and checked my 69 tbird. All 1969 tbirds had the 429 "thunderjet" (basic 429). The power steering pump is indeed driven by a belt from the crank shaft. Thats not insanely different from the power steering found on the 302 and 351 setups from 1973. Rockauto lists the various seals for this pump, and autozone lists both new and remanufactured pumps. I dont know what water pump they came with. IIRC, in 1969, every tbird had power steering, alternator, and AC. The water pump at least supports those accessories.

I do agree with you about the price. A non-complete or non-running engine is only worth its value as a core to me. This 429 in factory form was not a huge ground pounder. It could be made into one, sure. They make naturally aspirated 429s putting down 1000HP. But to do that, you're going to be gutting the engine and replacing pretty much everything but the block. Comparing dollars to horseypowers, for what it would take to rebuild the 429 to even factory specs and buy all the missing parts, and redo the exhaust, and motor mounts, and linkages and all the accessories and stuff, you could put that money into building up a 302/351 and have more power for less money.

Excuse the poor photos. Its already dark outside. 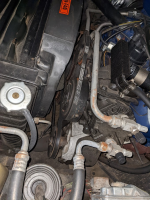 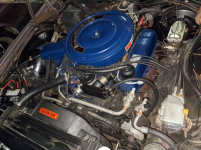 giantpune said:
What do you mean? I went out and checked my 69 tbird. All 1969 tbirds had the 429 "thunderjet" (basic 429). The power steering pump is indeed driven by a belt from the crank shaft.
Click to expand...

This is what he's talking about. The pump was mounted to the timing cover and driven directly by the crank. I have a setup of this somewhere in my parts stash. MPC shows it as 65-69 Lincoln and 69 MkIII, so it was also used before the 429/460 came into service. @c9zx I don't think you'll find this system on that T-bird.

This is close to a complete set of what is needed for the 1968 and 1969 Lincoln Mark III and I believe Continental as well. This was on a Mark III that was purc 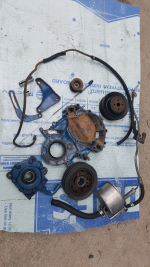 I did exactly this swap into a 71 vert years ago and had no problems. I used a March Performance drive system and that helped. Be sure of the right motor mounts and I used an electric fan with hooker headers. It was one of the most simple swaps I have ever done. $600.00 tops IMHO. Enjoy, Ed

My only experience with a 429 in a T-bird was when I drove a 1970 version. I have to say that was very quick. That power steering setup on the 69 looks like a bad idea. I admit I have never had to deal with one. Thank goodness.

Hello Chuck,
There’s always a market for N code Thunder Jet 429s. Many are just looking for some big block torque and power but don’t necessarily need the power or the expense of a CJ/SCJ. At 360hp and 480 ft-lbs of torque, these engines were not weak-kneed wimps. Running or not, a stored inside, still in the car, complete non-disassembled engine is a definite plus. The “It was running when we parked it” but still is disassembled with bolts and fasteners that will never be found are the ones that give me anxiety.
There were no Ford vehicles with a production installed crank driven P/S pump. This was something engineered for the MEL (Mercury-Edsel-Lincoln) engine family. These engines displaced 383, 410, 430, and 462 and were used from ‘58 through ‘68. The 460 was a 1968 mid-year replacement for the Lincoln and new Mark III and was the only 385 series engine to use the crank-driven P/S pump through ‘69.
The “short” water pump was an early ‘68/69 thing and is sought after by engine swap folks with cramped engine compartments. It doesn’t hurt that the same pump was used on the ‘69-70 Boss 429.
If you change your mind, you could always start at the $1000 level and do an OBO. And as mjkan suggested, you can always adjust the price to match the level of generosity you’re feeling that day.
And as I always warn, stay away from the “While I’m here, I might as well” syndrome!

Thanks Steve. I may reconsider. The biggest obstacle is storing it. My garage is full to overflowing. Chuck
G

c9zx said:
Thanks Steve. I may reconsider. The biggest obstacle is storing it. My garage is full to overflowing. Chuck
Click to expand...

Store it under the hood of your car.
G

Not to completely hijack the thread, but what would you guys say the value is on the same engine and transmission OP was asking about, but still in a running and driving car with all the accessories, from oil pan to air cleaner and including the power steering pump, alternator, exhaust manifolds, and AC compressor? AFAIK, its close to original except wear items replaced and the carb is edlebrock and the AC is running r134a.

I was driving mine around today and started daydreaming about doing something outrageous under the hood. Like if I wanted to swap the 429+c6 for completely different drivetrain, how much could I get for whats already there to put towards the new thing.

Another new part bad out of the box